Yom Kippur, the day of Atonement, marks the time when Israel pleads for forgiveness and atonement. In 1942 the Jewish inhabitants of ghetto in the town of Węgrów, Poland, went to synagogue on the eve of Yom Kippur for the Kol Nidre prayers, but were rounded up for deportation to Treblinka, Here is the story of one ‘righteous from the nations’ who risked their life to provide shelter and protection,

Yad Vashem to Honor Righteous Among the Nations from Poland Tuesday 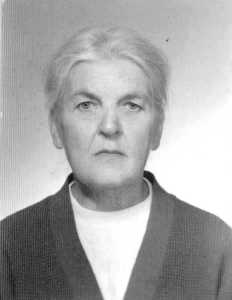 On Tuesday, October 11, 2011, Yad Vashem will hold a ceremony posthumously honoring Jadwiga Waszczuk, of Poland, as Righteous Among the Nations. Her daughter, Alina Wierzbicka, will accept the medal and certificate of honor on her late mother’s behalf. The event will take place in the presence of Deputy Ambassador of Poland to Israel Wiesław Kuceł, the survivor, Bina Hacohen, son of the survivor The Honorable Moshe HaCohen of the Jerusalem District Court, family and friends. A memorial ceremony in the Hall of Remembrance will be held at 10:00 a.m. followed by the awarding of the medal and certificate in the Garden of the Righteous Among the Nations at Yad Vashem. The events will take place in Polish and Hebrew. The event is open to the press, in coordination with the Media Relations dept. 02 644 3410.

On the eve of World War II, approximately 8,000 Jews lived in Węgrów, constituting almost 80% of the town’s population. Jews had begun to settle in the town in the first half of the 16th century, and by the beginning of the 17th century, the Jewish population had organized itself into a community. When Hasidism spread to Poland, Węgrów became a center of Hasidic culture. On 3 September 1939, just two days after the outbreak of WWII, the Germans bombed the town, and one week later, it was captured. Soon after, the Jewish residents were sent to forced labor, where they endured abusive treatment by the German guards.

In December 1940, the Jews of Węgrów were moved into a single neighborhood meant to serve as a ghetto. Initially, the ghetto was open and its residents were free to leave to purchase food. In the summer of 1942, the Germans sealed the ghetto, with 8,300 Jews inside. There was tremendous overcrowding, and hundreds died from hunger and disease.

On 22 September 1942, Yom Kippur eve, the SS, accompanied by Polish police and Ukrainian forces surrounded the ghetto. The Jews were assembled and forced to march to the train station in Sokolów, a distance of 17 km. There they were loaded onto cattle cars and brought to Treblinka.

The Spielman family – Alter and Hava, their daughter Bina, and their grandmother had continued to live in their home outside the ghetto even after its establishment. Hava and Bina were returning from Yom Kippur services at the synagogue when they were targeted in a roundup by the Germans and their collaborators. The two sought shelter at the homes of their Christian neighbors, but were refused entry by their terrified owners. Finally, Hava and Bina came to the Waszczuk’s home, at the end of their street. The Spielmans and the Waszczuks were not especially close, but their daughters, Bina Spielman and Danuta Waszczuk, were classmates. A devout Christian, Jadwiga Waszczuk unhesitatingly agreed to hide Hava and Bina in her home, stating “Whatever becomes of you, will become of me.” Well aware of the danger that in which they had placed the family, Hava and Bina stayed only a short time in their home. In the space of a few hours, Jadwiga arranged for forged documents for Hava and Bina, listing them as Polish. Hava and Bina were arrested in the street and sent to Auschwitz as Polish prisoners. A German officer took a liking to Bina, and invited her into his house as a caretaker for his child. Bina was able to convince the officer to help her free her mother, and Hava was released from the camp

Prayer: Avinu Malkenu – Our Father, our King, be gracious to us and answer us, for we have no merit of our own. Deal kindly with us and save us! Lord, thank you for those righteous from the nations who were willing to save Jewish people from death. Help us to stand up and to speak out for justice and righteousness in every situation, and be willing to follow you in every situation. In Yeshua’s name we pray, Amen.