Posted on September 6, 2015 by richardsh 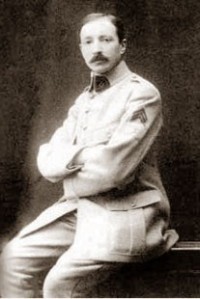 Born in France in 1877, Isaac obtained a degree in History and Geography in 1902 and was professor for over 30 years. A fighter by nature with an intense thirst for truth, he was strongly influenced by Péguy from the moment they first met in 1897. He fought the accusers of Dreyfus, not because Dreyfus was a Jew, but in pursuit of justice and truth. In 1936 he was appointed Inspector General of Public Education. However it was his history text books that made him famous.

His interest in the historical problem of Christian anti-semitism began at the end of 1942. In October 1943 the Gestapo arrested his daughter, son-in-law, one of his sons and his wife. He alone escaped through an extraordinary piece of luck. Though his son escaped the other three never returned. His wife, however, succeeded in conveying a last message to him: “Finish the work which the world is waiting for from you.” This referred to the editing of his book “Jesus and Israel” in which his wife had shown much interest from the outset.

In spite of having to continually flee and in village presbyteries, he continued to work on this book which he completed after the war in 1947 and which was published in 1948.6

In August 1947 an Emergency Conference on Anti-semitism was convened by an Anglo-American committee at Seelisberg in Switzerland. At this conference the Christian participants of the Commission on The task of the Churches in fighting against anti-semitism formulated the famous Ten Points of Seelisberg, taking as a starting-point Jules Isaac’s eighteen theses which he and Rabbi Joseph Kaplan proposed for the discussion.

“The Teaching of Contempt”

Jules Isaac was a man of action who fought for the truth. In 1960 he went to see Pope John XXIII in order to present him with his book. He had previously had an audience with Pius XII in 1949 when he called the Pope’s attention to the prayer of intercession on Good Friday. In his diary he describes his stay in Rome and the warm reception he received from Pope John XXIII at the audience on 13th June 1960.

He suggested to the Pope the creation of a sub-commission to study the necessary correction of Christian teaching. Encouraged by the very positive reception he received from the Pope, he was confirmed in his hopes by Cardinal Bea with whom he had a meeting two days later. As we know, a sub-commission was in fact created.

In order to develop interest for mutual understanding among Christians and Jews, Jules Isaac also invested much energy in the field of Christian religious education on an international level. With this in view he founded the first group of the Amitié Judéo-chrétienne de France at Aix-en-Provence, whilst Edmond Fleg created the group in Paris. Jules Isaac also drew up the statutes of the Amitié Judéo-chrétienne de France and was president of this association for many years.

It is also thanks to his inspiration that the Amicizia Ebraico-cristiana di Firenze came into existence in 1950. Among the founding members were: Aldo Neppi Modona, Giorgio La Pira, Ines Zilli Gay, Angelo Orvieto, Arrigo Levasti, Raffaele Ciampini, Giacomo Devoto, Raffaello Del Re and Lina Trigona. From 1951 on the Amicizia published a Bollettino. On May 3, 1964 the association organised an important commemorative celebration in honour of Jules Isaac who died in Aix-en-Provence on September 5, 1963.

Prayer: Thank you Lord for the courage and perseverance of Jules Isaac, and the effect of his life and work in changing the state of Jewish-Christian relations in the post-Shoah context. Give us today men and women of prophetic vision and engaged practice, who will make a difference in the world in which we live. In Yeshua’s name we pray. Amen.

Messianic Jewish teacher in UK
View all posts by richardsh →
This entry was posted in otdimjh and tagged article, isaac, jules isaac, otdimjh. Bookmark the permalink.