Posted on September 7, 2015 by richardsh

Frescopainted by Bernardino di Betto, called Pinturicchio, depict important events in the life of Siena’s favorite son, Enea Silvio Piccolomini (1405-1464). Here, he leaves for the Council of Basel, where, as a young man, he made his first big impression. The storm in the background is a western art first.

The Seventeenth Ecumenical Council of the Roman Catholic Church was convoked as the Council of Basel by Pope Martin V shortly before his death in February 1431 and took place in the context of the Hussite wars in Bohemia and the rise of the Ottoman Empire. At stake was the greater conflict between the Conciliar movement and the principle of papal supremacy. Pope Eugene IV passed the anti-Jewish legislation.

Amongst the decrees it passed are the following:

“Converts should be forbidden, under pain of severe penalties, to bury the dead according to the Jewish custom or to observe in any way the sabbath and other solemnities and rites of their old sect. Rather, they should frequent our churches and sermons, like other Catholics, and conform themselves in everything to Christian customs.”

“Furthermore, renewing the sacred canons, we command both diocesan bishops and secular powers to prohibit in every way Jews and other infidels from having Christians, male or female, in their households and service, or as nurses of their children; and Christians from joining with them in festivities, marriages, banquets or baths, or in much conversation, and from taking them as doctors or agents of marriages or officially appointed mediators of other contracts.” 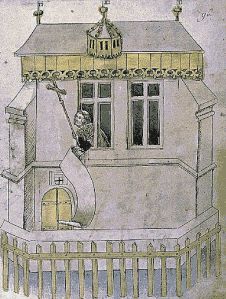 “They should not be given other public offices, or admitted to any academic degrees, or allowed to have on lease lands or other ecclesiastical rents. They are to be forbidden to buy ecclesiastical books, chalices, crosses and other ornaments of churches under pain of the loss of the object, or to accept them in pledge under pain of the loss of the money that they lent. They are to be compelled, under severe penalties, to wear some garment whereby they can be clearly distinguished from Christians. In order to prevent too much intercourse, they should be made to dwell in areas, in the cities and towns, which are apart from the dwellings of Christians and as far distant as possible from churches. On Sundays and other solemn festivals they should not dare to have their shops open or to work in public.” 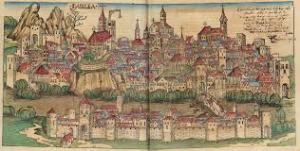 The holy general synod of Basel, legitimately assembled in the holy Spirit, representing the universal church, for an everlasting record. This holy synod following in the footsteps of our saviour Jesus Christ, desires in deepest charity that all may acknowledge the truth of the gospel and thereafter abide in it faithfully. By these salutary instructions it desires to provide measures whereby Jews and other infidels may be converted to the orthodox faith and converts may remain steadfastly in it. It therefore decrees that all diocesan bishops should depute persons well trained in scripture, several times a year, in the places where Jews and other infidels live, to preach and expound the truth of the catholic faith in such a way that the infidels who hear it can recognize their errors. They should compel infidels of both sexes who have reached the age of discretion, to attend these sermons under pain both of being excluded from business dealings with the faithful and of other apposite penalties. But the bishops and the preachers should behave towards them with such charity as to gain them for Christ not only by the manifestation of the truth but also by other kindnesses. The synod decrees that Christians of whatever rank or status who in any way impede the attendance of Jews at these sermons, or who forbid it, automatically incur the stigma of being supporters of unbelief.

Since this preaching will be more fruitful in proportion to the linguistic skill of the preachers, we decree that there must be faithful observance of the constitution of the council of Vienne, which ordered the provision in certain universities of teachers of the Hebrew, Arabic, Greek and Chaldean languages. So that this may be more adhered to, we wish that the rectors of these universities should add to what they swear to on taking office, that they will endeavour to observe the said constitution. It should be clearly laid down, at the councils of the provinces in which these universities are situated, that the teachers of the said languages are to be adequately recompensed.

Prayer: Lord, have mercy on your church for its oppressive treatment of the stranger and the outsider, and forgive the anti-Jewish and anti-Semitic polemics and persecution of the past. Cleanse your church of such attitudes and activities, and may your people Israel know your reconciling and healing love. In Yeshua’s name we pray. Amen.

Basel had been designated as the place for this ecumenical council by the abortive council of Pavia — Siena (1423-1424). It was opened on 25 July 1431 by the papal legate, who had been appointed by Pope Martin V in two bulls dated 1 February 1431, Dum onus universalis gregis and Nuper siquidem cupientes shortly before the pope’s death on 20 February 1431. A great part of the council’s work in the early years was taken up with its quarrel with Pope Eugenius IV, who was accused of wishing to dissolve or transfer the council. The prospect of re-union with the eastern church provided an opportunity to transfer the council to another city. This move was supported by the council fathers loyal to the pope, who however were in a minority, and in the 25th session they voted for the city of Ferrara. There the council was re-opened on 8 January 1438, Pope Eugenius IV later attending in person. Some historians doubt the ecumenicity of the first 25 sessions at Basel. All agree that the sessions held at Basel after the 25th session until the final one on 25 April 1449 cannot be regarded as sessions of an ecumenical council.

The decisions taken at Basel have the form of conciliar decrees. Those taken at Ferrara, Florence and Rome are almost always in the form of bulls, since the pope was presiding in person; in these cases the decree mentions the council’s approval and contains the words “in a solemnly celebrated general session of the synod”.

Almost all the decrees of re-union were of little effect. Nevertheless it is significant that the church’s unity was discussed in a council attended by some eastern bishops and theologians, and that there was agreement on the principal dogmatic and disciplinary questions which had divided the two churches for many centuries.