30 July 1492 Expulsion of the Jewish people from Spain #otdimjh

In the same month in which their Majesties [Ferdinand and Isabella] issued the edict that all Jews should be driven out of the kingdom and its territories, in the same month they gave me the order to undertake with sufficient men my expedition of discovery to the Indies.” So begins Christopher Columbus’s diary. The expulsion that Columbus refers to was so cataclysmic an event that ever since, the date 1492 has been almost as important in Jewish history as in American history. On July 30 of that year, the entire Jewish community, some 200,000 people, were expelled from Spain. [writes Jacob Telushkin: Jewish Virtual Library] 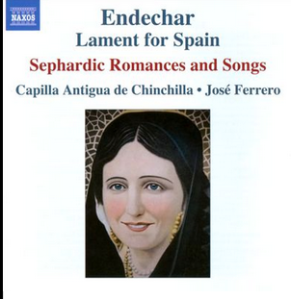 Tens of thousands of refugees died while trying to reach safety. In some instances, Spanish ship captains charged Jewish passengers exorbitant sums, then dumped them overboard in the middle of the ocean. In the last days before the expulsion, rumors spread throughout Spain that the fleeing refugees had swallowed gold and diamonds, and many Jews were knifed to death by brigands hoping to find treasures in their stomachs.

The Jews’ expulsion had been the pet project of the Spanish Inquisition, headed by Father Tomas de Torquemada. Torquemada believed that as long as the Jews remained in Spain, they would influence the tens of thousands of recent Jewish converts to Christianity to continue practicing Judaism. Ferdinand and Isabella rejected Torquemada’s demand that the Jews be expelled until January 1492, when the Spanish Army defeated Muslim forces in Granada, thereby restoring the whole of Spain to Christian rule. With their most important project, the country’s unification, accomplished, the king and queen concluded that the Jews were expendable. On March 30, they issued the expulsion decree, the order to take effect in precisely four months. The short time span was a great boon to the rest of Spain, as the Jews were forced to liquidate their homes and businesses at absurdly low prices. Throughout those frantic months, Dominican priests actively encouraged Jews to convert to Christianity and thereby gain salvation both in this world and the next. 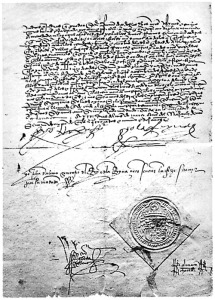 The most fortunate of the expelled Jews succeeded in escaping to Turkey. Sultan Bajazet welcomed them warmly. “How can you call Ferdinand of Aragon a wise king,” he was fond of asking, “the same Ferdinand who impoverished his own land and enriched ours?” Among the most unfortunate refugees were those who fled to neighboring Portugal. In 1496, King Manuel of Portugal concluded an agreement to marry Isabella, the daughter of Spain’s monarchs. As a condition of the marriage, the Spanish royal family insisted that Portugal expel her Jews. King Manuel agreed, although he was reluctant to lose his affluent and accomplished Jewish community. 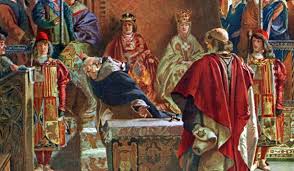 In the end, only eight Portuguese Jews were actually expelled; tens of thousands of others were forcibly converted to Christianity on pain of death. The chief rabbi, Simon Maimi, was one of those who refused to convert. He was kept buried in earth up to his neck for seven days until he died. In the final analysis, all of these events took place because of the relentless will of one man, Tomas de Torquemada.

The Spanish Jews who ended up in Turkey, North Africa, Italy, and elsewhere throughout Europe and the Arab world, were known as Sephardim — Sefarad being the Hebrew name for Spain. After the expulsion, the Sephardim imposed an informal ban forbidding Jews from ever again living in Spain. Specifically because their earlier sojourn in that country had been so happy, the Jews regarded the expulsion as a terrible betrayal, and have remembered it ever since with particular bitterness. Of the dozens of expulsions directed against Jews throughout their history, the one from Spain remains the most infamous.

Prayer: Lord, how we lament the suffering of the Jewish people, the treatment of Jews and Jewish Christians by the Church and the Crown, and the expulsion of 1492. Yet we see your hand of Providence yet again scattering our people, sending them into the New World, and to places where they would be free to live, learn and let their lights shine. Only you know the times and seasons of our lives, both as individuals and as peoples. Lord, have mercy upon Israel and all nations. In Yeshua’s name, and for his glory, we pray. Amen.

Messianic Jewish teacher in UK
View all posts by richardsh →
This entry was posted in otdimjh and tagged 1492, article, columbus, expulsion, otdmijh, spain. Bookmark the permalink.