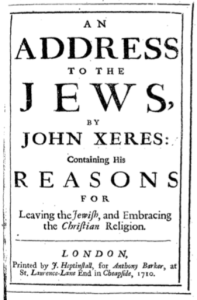 Xeres, Jonah ben Jacob, was a native of North Africa, where he came in contact with English Christian merchants and learned the truth as it is in Jesus from them. In 1707 he came to London and was instructed and baptized by Dr. Allix in 1709. He then wrote an “Address to the Jews,” containing his reasons for leaving the Jewish and embracing the Christian religion. (See Wolff Bib. Heb., 14, N. 823.) [Bernstein: Some Jewish Witnesses]

The book is dedicated to the then Archbishop of York (in 1709), and prefaced by an attestation to the respectability of the author by seven London merchants, and another by the learned Dr. Allix. 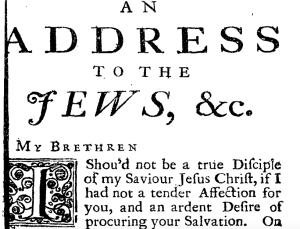 “We, whose names are underwritten, merchants trading into Barbary in Africa, do hereby certify, all whom it may concern, that we, each of us, having formerly lived for several years in those parts, did then, as we do now, personally know Jonah ben Jacob Xeres, who was born in Saphia, a sea-port town on that coast. His parents, being Hebrews, [526] were reputed to be honest and substantial people; who employed much care in educating this their son, Jonah, in the Jewish religion, and no less expense in instructing him in the Hebrew, Arabic, and Chaldean tongues.

He the said Jonah lived in that country a professed Jew, till the age of five and twenty, or thereabouts; and always behaved himself sober in his conversation, and no less just in his dealing, as some of us have experienced, having had occasion to employ him on several accounts, whereby, amongst other conversation, he had an opportunity of discoursing with some in our factory about matters of religion; and, as he now informs us, was thereby possessed with some notion, that the Messiah had already come; whereby, being uneasy under such a weighty doubt, he came over to England about eighteen months ago, in order to acquire a full satisfaction.

After some time here, he applied himself to some of us to recommend him to some learned Divine for information; whereupon he was sent to the Rev. Dr. Allix, on whom some of us have since waited, who, requesting of us a character of the said Jonah, is the occasion of this paper, which we do in all respects believe to be true, and have a very good opinion of the probity and sincerity of the above-mentioned Jonah; and that we trust upon his examination, he will prove to the judgment of the Most Reverend the Archbishops, the Right Reverend the Bishops, the Reverend the Clergy, and all other pious Christians, to whom we recommend him, [527] &c.

“Done at London, this eight and twentieth day of May, one thousand seven hundred and nine.

“These are to certify, that upon several discourses had with the aforementioned Jonah ben Jacob Xeres, I have found him very well acquainted with the Holy Scriptures of the Old Testament, and all other Jewish and particularly Talmudical learning; so that he was very ready, upon the chief objections that Jews make to the doctrine, deity, and office of our Saviour. But, as he is endowed with very good natural and acquired parts, I was the more able to satisfy and convince him of the truth; so that, after having examined by Scripture all the most material controversies, he hath freely declared to myself, and his other friends, his desire to renounce the errors and prejudices of his education in the Jewish religion, and to embrace and profess the Christian faith. 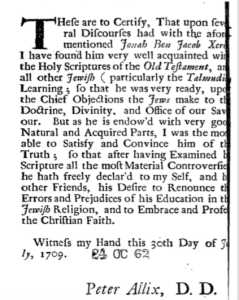 Reflection: Reading the story of of Xeres one is struck by the out-of-the-blue nature of his life and experience. Few Jewish people lived in the UK, even fewer were believers in Yeshua, and at the beginning of the eighteenth century there was little understanding of the ongoing relationship between the Church and Israel. Yet suddenly appears this isolated yet fascinating account, against the backdrop of slowly changing attitudes to Jews and Judaism. Like Jesus-believing Jews throughout the centuries, Xeres’ life, faith and story go ever against the stream, and even today he is an example to us of that bitter-sweet combination of identities, theologies and personal experiences.

Born in 1641 in Alençon, France, he became a pastor first at Saint-Agobile Champagne, and then atCharenton, near Paris. The revocation of the Edict of Nantes in 1685 compelled him to take refuge inLondon. There he set up a church in Jewin Street, Aldersgate.[1] He was the most celebrated Huguenot preacher of the 1680s in England, closely associated with Charles Le Cène, and known to advocatereligious toleration.[2]

In 1690 Allix was created Doctor of Divinity by Emmanuel College, Cambridge, and was given the treasurership and a canonry in Salisbury Cathedral by Bishop Gilbert Burnet.[1]

Allix discovered that Codex Ephraemi is a palimpsest. He died in London.

Messianic Jewish teacher in UK
View all posts by richardsh →
This entry was posted in otdimjh and tagged article, bernstein, otdimjh, xeres. Bookmark the permalink.