As a clerk in his uncle’s bank in Göttingen, Ger., Reuter made the acquaintance of the eminent mathematician and physicist Carl Friedrich Gauss, who was at that time experimenting with the electric telegraph that was to become important in news dissemination. 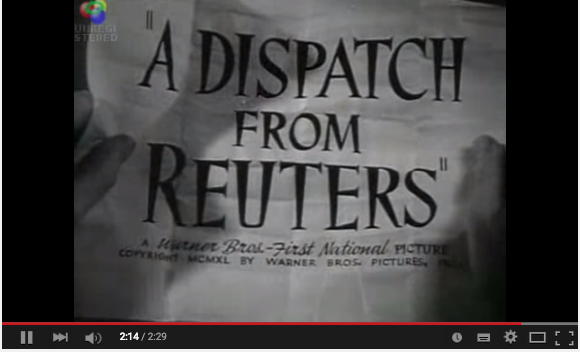 In October 1845, Josaphat moved to England, where he at first called himself Joseph Josaphat. Within a few weeks he converted to Christianity and, at his baptism on November 16, 1845, took the name Paul Julius Reuter during a ceremony at St. George’s German Lutheran Chapel in London. Seven days later, Reuter married Ida Maria Elizabeth Clementine Magnus at the same church.

In the early 1840s he joined a small publishing concern in Berlin. After publishing a number of political pamphlets that aroused the hostility of the authorities, he moved to Paris in 1848, a year of revolution throughout Europe. He began translating extracts from articles and commercial news and sending them to papers in Germany. In 1850 he set up a carrier-pigeon service between Aachen and Brussels, the terminal points of the German and the French-Belgian telegraph lines. 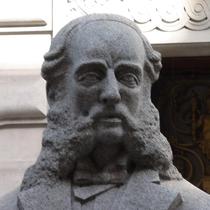 Moving to England, Reuter opened a telegraph office near the London stock exchange. At first his business was confined mostly to commercial telegrams, but, with daily newspapers flourishing, he persuaded several publishers to subscribe to his service. His first spectacular success came in 1859 when he transmitted to London the text of a speech by Napoleon III foreshadowing the Austro-French Piedmontese war in Italy.

The spread of undersea cables helped Reuter extend his service to other continents. After several years of competition, Reuter and two rival services, Havas of France and Wolff of Germany, agreed on a geographic division of territory, leaving Havas and Wolff their respective countries, parts of Europe, and South America. The three agencies held a virtual monopoly on world press services for many years. 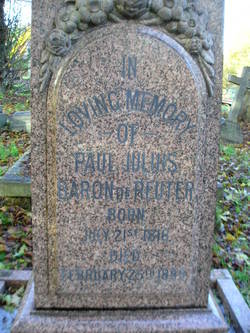 Reuter was created a baron by the Duke of Saxe-Coburg-Gotha in 1871 and later was given the privileges of this rank in England. He retired as managing director of Reuters in 1878. He is buried in the Christian section of West Norwood Cemetery.

Reflection: It is not for us to judge the motives that led Paul Reuter to become a Christian, or assess the depth and sincerity of his personal faith, but as for many, the path to social and business advancement was limited for Jews in the 19th century. His exploits and the communications industry he helped to found make a fascinating story of one who, born a Jew from rabbinic parentage, became a Christian and make his mark on the world in which he lived, and left a lasting legacy.

REUTER, PAUL JULIUS, FREIHERR VON (1816–1899), originally Israel Beer Josaphat (also called Josephsthal), German banker, bookseller, news entrepreneur and founder of the Reuters Ltd. news agency. Born in Kassel, Germany, as the third son of the Provisional Rabbi Samuel Levi Josaphat (died 1829), the 13-year-old Israel Beer was sent to his uncle in Goettingen where he was trained in a local banking house. At Goettingen University, he made the acquaintance of the famous mathematician and astronomer Carl Friedrich Gauss (1777–1855), who was experimenting in electrotelegraphy. In 1845, after having settled in Berlin, he converted to Protestantism, assumed the name Paul Julius Reuter, and married Ida, the daughter of Friedrich Martin Freiherr von Magnus (1796–1869), a Berlin banker.