Just before the close of this Period the London Mission sustained a further heavy loss by the death on March 13th,1873, in the 70th year of his age, of the Rev. John Christian Reichardt, who for very nearly half a century had devoted his life as a missionary to the Jews. (Gidney p344ff, here)

Appointed as far back as 1824, he worked, as we have already seen, in Warsaw, and in London, and also temporarily in Jerusalem, and in Holland. He was Clerical Superintendent of the Operative Jewish Con-verts’ Institution from 1831 to 1851. A brilliant scholar, he is chiefly remembered for his great work, already referred to, con-tinued for many years, on the Society’s editions of the Hebrew Old and New Testaments. 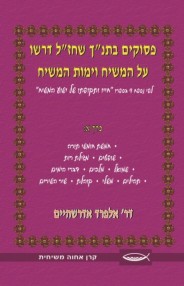 He also rendered conspicuous service in the training of candidates for missionary employment. He had great influence with the Committee, whose meetings he frequently attended — an influence which was increased by his connexion by marriage with Goodhart, at that time secretary. Reichardt’s death, which occurred almost suddenly in the midst of his multifarious labours, snapped a link with the second generation of the Society, which was incalculably the poorer by the departure of three of its very foremost workers — Cartwright, Ewald and Reichardt — within twelve years.

Reichardt was minister of the Episcopal Church, was born at Ruhrort, on the Rhine, in 1803. He was educated first at the public school in his native place, and afterwards pursued his studies at the gymnasium at Duisburg. Feeling a desire to devote himself to missionary work, he was recommended to the missionary society at Barmen, which received him, and he was sent by it to the excellent Janicke’s Missionary Institution at Berlin. 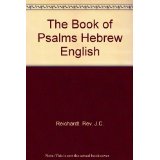 Janicke had no funds at command to enable him to send forth missionaries, but the missionary societies in England, in Holland, and elsewhere were thankful to avail themselves of those who had been trained by the venerable pastor in Berlin. In the year 1824 the London Society for Propagating the Gospel among the Jews appointed Mr. Reichardt for the mission in Poland, in connection with Mr. Becker, a former pupil of father Janicke.

During 1825 and 1826 he travelled extensively through Poland; from 1827 to 1830 he was engaged in frequent missionary journeys in Holland and Bavaria, and in 1831 he was active, together with the late Rev. M. S. (afterwards bishop) Alexander, in preaching the Gospel to the Jews in London and the principal towns of England. From that time his permanent residence was at London, in prosecution of the missionary work in behalf of his society. In October, 1857, Mr. Reichardt left England on a special mission to Jerusalem, where he also remained for a time. After his return from Jerusalem, his time and efforts were mainly directed to the work of the society in England, with occasional visits to various missionary stations. His main work, however, was the revision of the text of the Hebrew New Testament, which was printed and published several times, and in correcting for the press multiplied editions of the Old Test., which the London Society, as well as the British Bible Society published. 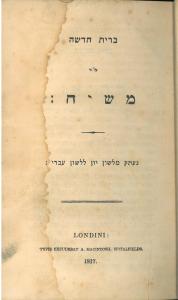 Prayer: Thank you Lord of the life of scholarship and service of John Christian Reichardt, and his legacy in the Hebrew New Testament and other works. The lives he touched, the faith he lived, and the witness he gave, continue to speak to us today. Help us to live in the light of your love this day. In Yeshua’s name we pray. Amen.

His son Dr Ernest Noel Reichardt lived at Dorset House, Cheam Road, Ewell and was supervisor of a mental asylum. His story is told here:

Messianic Jewish teacher in UK
View all posts by richardsh →
This entry was posted in otdimjh and tagged article, otdimjh, reichardt. Bookmark the permalink.