Pope Pius V (who became a Saint in 1712) issues the papal bull Hebraeorum gens (“the people of the Hebrews”). Except for Rome and Verona, all Jews are to be expelled from the Papal States unless they convert to Christianity.

According to the Bull – a particular type of letters patent or charter issued by a Pope and named after the lead seal (bulla) that was appended to the end in order to authenticate it:

“The Jewish people fell from the heights because of their faithlessness and condemned their Redeemer to a shameful death. Their godlessness has assumed such forms that, for the salvation of our own people, it becomes necessary to prevent their disease. 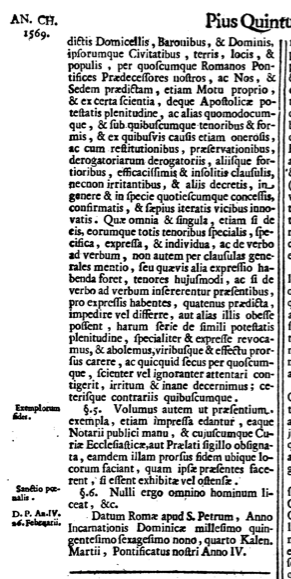 Besides usury, through which Jews everywhere have sucked dry the property of impoverished Christians, they are accomplices of thieves and robbers; and the most damaging aspect of the matter is that they allure the unsuspecting through magical incantations, superstition, and witchcraft to the Synagogue of Satan and boast of being able to predict the future. We have carefully investigated how this revolting sect abuses the name of Christ and how harmful they are to those whose life is threatened by their deceit.

On account of these and other serious matters, and because of the gravity of their crimes which increase day to day more and more, We order that, within 90 days, all Jews in our entire earthly realm of justice – in all towns, districts, and places – must depart these regions.

After this time limit shall all at the present or in the future, who dwell or wander into that city or other already mentioned, be affected, their property confiscated and handed over to the Siscus, and they shall becomes slaves of the Roman Church, live in perpetual servitude and the Roman Church shall have the same rights over them as the remaining [worldly] lords over slaves and property.”

Jews were able to take refuge in the slums of Rome and Verona, where the bull never took effect, but several thousand were forced into exile. The towns of Ravenna, Orvieto, Viterbo, Perugia, Spoleto, and Terracina were emptied of Jews, and the Papal States lost numerous entrepreneurs, craftsmen, merchants, and professionals.

They were permitted to return by the next pope, Gregory XIII. (1572-85), who, while he showed an occasional leniency, introduced a large number of severe restrictions.

Reflection: In order to preserve the truth of the Catholic faith, it was felt necessary to prevent the influence of Jews and Judaism. This was combined with strong anti-Jewish feeling as a sign of true devotion to the Church. Over hundreds of years such institutionalised antisemitism paved the way for the Holocaust in Modernity and gave sufficient cause for the Jewish people never to feel safe, and to keep the Christians and their message at arms length wherever possible. Today, especially after the Second Vatican Council (1962), the climate has changed. The work of the Roman Catholic – Messianic Jewish Dialogue Group made up of Catholic leaders and theologians, and Messianic Jews from different streams of the Messianic movement, addresses some of the issues that have prevented Jewish identity and expression in the Catholic Church. There are other signs of rapprochement between the two faith communities, (which should never have been divided) but there is still a long way to go.

Prayer: Lord, have mercy on your people, both the Church and Israel. Help Messianic Jews to bring healing and reconciliation between the different parts of your divided Body, so that the fullness of the unity of the One New Man that you have made us to be through your life, ministry, death and resurrection, may be restored, both in theory and in practical ways, as we prepare for the restoration of all things on your return. In Yeshua’s name we pray. Amen.

Messianic Jewish teacher in UK
View all posts by richardsh →
This entry was posted in otdimjh and tagged article, otdimjh, pius V. Bookmark the permalink.