Bernstein includes Marx in “Some Jewish Witnesses for Christ”

Marx, Karl, born at Treves, in 1818. He was baptized with his father, his brother, and five sisters in 1824. In 1842, he became editor of “Reinische Zeitung für Politik, Handel, und Gewerbe.” In 1843, he published at Paris, “Zür Kritik der Hegelschen Rechts Philosophie.” In 1848 he edited the “Neue Rheinische Zeitung.” He is known as the founder of the political theory called Socialism, and on account of that he came in conflict with several governments, and he sought refuge in England. He married the sister [358] of the minister, von Westphal. She died in 1881, and he also passed away in 1883, in London.

Karl Heinreich Marx was born in Trier, Rhenish Prussia (present-day Germany), on May 5, 1818, the son of Heinrich Marx, a lawyer, and Henriette Presburg Marx, a Dutchwoman. Both Heinrich and Henriette were descendants of a long line of rabbis. Heinrich had converted to Protestantism in 1816 or 1817 in order to continue practicing law after the Prussian edict denying Jews to the bar. Karl was baptized in 1824, but his mother, Henriette, did not convert until 1825, when Karl was 7.

While the family did not appear religious at all — it was said that not a single volume on religion or theology was in Heinrich’s modest library — Karl was raised in an atmosphere of religious toleration. There was some discrimination against Jews in the area, but general religious tolerance was the standard. Karl was sent to religious school primarily for academic rather than religious training. On the whole, the family was not committed to either evangelical Protestantism or evangelical Judaism.

Karl attended a Lutheran elementary school but later became an atheist and a materialist (one who believes that physical matter is all that is real), rejecting both the Christian and Jewish religions. It was he who coined the saying “Religion is the opiate of the people,” a basic principle in modern communism.

On 21 February 1848 Karl Marx, along with Friedrich Engels, published the Communist Manifesto.

The family lived as very liberal Protestants, that is, without any profound religious beliefs. Thus, Karl grew up without an inhibiting consciousness of himself as being Jewish. In changing his credal allegience, or course, the father, newly baptized Heinrich, experienced the alienation of turning his back on his religious family and traditions. Thus, though politically emancipated and socially liberated from the ghetto, the experience of being uprooted and not completely at home in the Germany of the nineteenth century did affect the Marx family (Miceli, Atheism, pp. 94, 95) 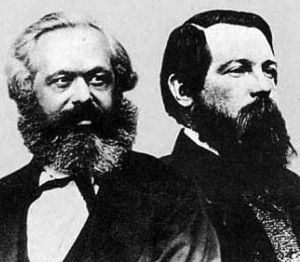 In his early years Marx won a prize for his essay on the Trinity. But studying Hegel and Feuerbach led him to a thoroughgoing atheism. Nevertheless his writing is seeped in Jewish themes, and his secular apocalyptic vision of revolution qualifies him to be seen as a Jewish prophet promoting a heretical version of the biblical metanarrative.

In October 1835 Marx enrolled in Bonn University in Bonn, Germany, where he attended courses primarily in law, as it was his father’s desire that he become a lawyer. Marx, however, was more interested in philosophy and literature than in law. He wanted to be a poet and dramatist. In his student days he wrote a great deal of poetry—most of it preserved—that in his mature years he rightly recognized as imitative and unremarkable.

He spent a year at Bonn, studying little but partying and drinking a lot. He also piled up heavy debts. Marx’s dismayed father took him out of Bonn and had him enter the University of Berlin, then a center of intellectual discussion. In Berlin a circle of brilliant thinkers was challenging existing institutions and ideas, including religion, philosophy, ethics and politics. Marx joined this group of radical thinkers wholeheartedly. He spent more than four years in Berlin, completing his studies with a doctoral degree in March 1841.

Marx then turned to writing and journalism to support himself. In 1842 he became editor of the liberal Cologne newspaper Rheinische Zeitung, but the Berlin government prohibited it from being published the following year. In January 1845 Marx was expelled from France “at the instigation of the Prussian government,” as he said. He moved to Brussels where he founded the German Workers’ Party and was active in the Communist League. Here he wrote the famous Manifesto of the Communist Party.

Expelled by the Belgian government, Marx moved back to Cologne, where he became editor of the Neue Rheinische Zeitung in June 1848. Less than a year later, the Prussian government stopped the paper, and Marx himself was exiled. He went to Paris, but in September the French government expelled him again. Marx finally settled in London, England, where he lived as a stateless exile. Britain denied him citizenship and Prussia refused to take him back as a citizen for the rest of his life.

In London Marx’s sole means of support was journalism. He wrote for both German-and English-language publications. From August 1852 to March 1862 he was correspondent for the New York Daily Tribune, contributing a total of about 355 articles. Journalism, however, paid very poorly; Marx was saved from starvation by the financial support of friend and fellow writer, Friedrich Engels (1820–1895). In London in 1864 Marx helped to found the International Workingmen’s Association (known as the First International), for which he wrote the inaugural address. Thereafter Marx’s political activities were limited mainly to exchanging letters with radicals in Europe and America, offering advice, and helping to shape the socialist and labor movements.

Marx was married to his childhood sweetheart, Jenny von Westphalen, who was known as the “most beautiful girl in Trier,” on June 19, 1843. She was devoted to him. She died of cancer on December 2, 1881, at the age of sixty-seven. For Marx it was a blow from which he never recovered.

The Marxes had seven children, four of whom died in infancy or childhood. He deeply loved his daughters, who, in turn, adored him. Of the three surviving daughters—Jenny, Laura, and Eleanor—two married Frenchmen. Both of Marx’s sons-in-law became prominent French socialists and members of Parliament. Eleanor was active as a British labor organizer.

Marx spent most of his working time in the British Museum, doing research both for his newspaper articles and his books. In preparation for Das Kapital he read every available work in economic and financial theory and practice.

Marx’s excessive smoking, wine drinking, and love of heavily spiced foods may have been contributing causes to his illnesses. In the final dozen years of his life, he could no longer do any continuous intellectual work. He died in his armchair in London on March 14, 1883, about two months before his sixty-fifth birthday. He lies buried in London’s Highgate Cemetery, where his grave is marked by a bust.

Marx’s influence has been compared to that of Moses and Jesus. Perhaps more than any other thinker he has shaped the history of the 20th century, with its revolutions and Communist regimes in Russia, China and South America. Today its effects continue, although the ideologies of Marxism has been discredited. Marxism still has profound influence in social theory, cultural studies and political analysis today. Many Jewish radicals were attracted to Marxist philosophy, especially in Russia and the early Zionist movement. Marx’s own views on Jews and Judaism are open to various interpretations, but are generally seen as reacting against the nascent anti-Semitism that saw no place for Jews in modern societies.

Prayer: Lord, it is impossible to ignore the influence of Marx and his writings on the modern world. Yet his atheism and communism, whilst bringing a prophetic critique of the inequality derived from all forms of social organisation, do not do justice to the social and economic teaching of the Scriptures, nor acknowledge your presence and the reality of the spiritual life. May the reforming zeal of Marx be correctly applied to situations of injustice and inequality today. May your divine love revealed to all humanity and all creation through your son, the Messiah Yeshua, be made known. May we be living and faithful examples of that revolution that changes the human heart as well as the societies in which we live. In Yeshua’s name we pray. Amen.

Karl Marx and the Radical Critique of Anti-Semitism – Robert Fine

FROM THEOLOGY TO SOCIOLOGY:BRUNO BAUER AND KARL MARX ON THE QUESTION OF JEWISH EMANCIPATION

Messianic Jewish teacher in UK
View all posts by richardsh →
This entry was posted in otdimjh and tagged article, marx, otdimjh. Bookmark the permalink.