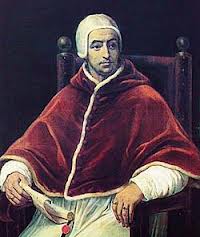 Bernstein waxes lyrical and gives an uncritical account of this infamous disputation and its consequences:

Joshua Halorki was born in Spain in the latter part of the fourteenth century, at Lorca, in Murcia. He early distinguished himself as a subtle Talmudist and skilful physician. He was a Jew of the strictest sect. His scrupulous search for arguments against Christianity was over-ruled to his discovering that Christianity was founded on the Rock of Ages, against which the very gates of hell could not prevail. Dr. Joshua de Lorca then confessed, publicly, that in assaying to convict the Hebrew Christian, Solomon Halevi, of heresy, he proved himself to be ignorant of the spirit, and an unbeliever in the letter, of Moses and the Prophets. He begged for the privilege of being baptized.

He assumed the name, when the sacrament of baptism was administered to him, of Geronymo à Santa Fé. It was soon made evident that Joshua—or Geronymo, or Hieronymus, as he is variably known in ecclesiastical history—was a chosen vessel in the hands of his Redeemer. The new [50] Hebrew Christian devoted his immense wealth, intellectual and other, towards the promotion of his Saviour’s honour and glory, especially amongst his Jewish brethren. His extensive acquaintance with Talmudical and other Jewish lore, enabled him so to expose their false teaching, as to make their fallacies very evident to such as would not hoodwink their reason by impervious prejudice.

His celebrated work, “Probationes N. T. ex V. T. per quas doctrina Talmud improbitur, et dicitur liber contra errores Judæorum,” is one of the most decisive testimonies for Christianity, and against Talmudism, which a Hebrew Christian witness could have borne.

In the year 1413, an evermemorable conference between Jewish and Christian divines was agreed upon. The meeting was convened at Tortosa, in Aragon. The Pope-Pretender, Benedict XIII, or Pedro de Luna, presided. The most renowned and famous Rabbis of the time were ranged on one side, Geronymo à Santa Fé—assisted by Andreas Baltram, a native of Valencia, another Hebrew Christian, afterwards Bishop of Barcelona—on the other side, and they met on the 7th of February, 1413, to discuss whether “Jesus, called of Nazareth, who was born at Bethlehem in the latter days of King Herod, seventy years before the destruction of the second temple, who was crucified, and died at Jerusalem, is really the true Messiah, foretold by the prophets of the Old Testament.” 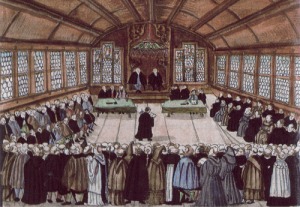 The discussion lasted till Nov. 12, 1414. It occupied sixty-nine sessions. It was attended by the grandees of the Church and Synagogue of the day. [51] The result was wonderful. All the Jewish disputants, with the exception of two, admitted, and signed a declaration accordingly, that they were fairly vanquished, and that utterly. Upwards of five thousand Jews made a public confession of their faith in Christ, and were baptized into the same.

The Jewish Encyclopedia article summarises the consequences of the Disputation in less rosy fashion:

Throughout the period of the disputation, Jews continually arrived in Tortosa, where they converted to Christianity. The authorities, on their part, intensified their persecutions, and ordered that everything which had been disqualified by Gerónimo should be obliterated from the Talmud. The disputation in itself acted as an incentive for anti-Jewish incitement, and in several towns the inhabitants adopted severe measures in order to force the Jews to convert. Many broke down and accepted baptism. Three works were written after the Disputation of Tortosa in an attempt at soul-searching: Sefer ha-Ikkarim(“Book of Principles”) of R. Joseph Albo, in which the author clarified the religious fundamentals discussed at the disputation; Sefer ha-Emunot (“Book of Beliefs”) by R. *Shem Tov, who regarded the cultivation of philosophy as the cause of conversion; and Iggeret Musar (“Letter of Ethics”) by R.Solomon *Alami, who considered that disrespect toward religion and ethics was the cause of the destruction of Spanish Jewry.

Prayer: Father, we live in a more enlightened age, where the dynamics and asymetries of power should no longer apply in matters of spiritual discussion and theological debate. Help us to learn from the past rather than simply repeat it. Whilst the arguments may have won the day, the friendships were lost in the interplay of politics, persecution and eventual expulsion in 1492. Father, have mercy, and renew right relationships between Israel and the nations, Christian and Jews. Help Messianic Jews to be a true bridge of understanding and acceptance of the other. In Yeshua’s name we pray. Amen.

TORTOSA, DISPUTATION OF, disputation held in Tortosa, in 1413–14, the most important and longest of the Christian-Jewish *disputations which were forced upon the Jews during the Middle Ages. It was apparently prompted by Gerónimo de Santa Fé (the apostate Joshua *Lorki) in which he claimed to prove the authenticity of the messianism of Jesus from Jewish sources. In 1412 the anti-pope *Benedict, XIII who was recognized as pope in Spain, ordered the communities of Aragon and Catalonia to send delegates for a discussion in his presence on the claims of Gerónimo. The disputation was drawn out over some 20 months, and 69 sessions were held; it was presided over by the pope, who also actively participated in it. From the outset, the disputation did not assume the form of a free discussion between two parties but that of a propagandist missionary attack accompanied by psychological pressure – to the point of intimidation and threats – by the Christian side against Jews, in order to compel them to accept the arguments of their adversaries. The principal Hebrew source for the history of the disputation is Shevet Yehudah by Solomon *Ibn Verga. The Jewish sources mention about 20 participants on the Jewish side; some of these actively participated, while others were advisers and observers. A neutral Christian account of the debate is also extant. In the disputation, the most prominent personalities were rabbis *Zerahiah ha-Levi, Astruc ha-Levi, Joseph *Albo, and Mattathias ha-Yiẓhari.

Immediately upon the first encounter, the pope announced – contrary to the promises which he had previously given to the Jews – that it was not intended to hold a discussion between two equal parties, but to prove the truth of Christianity and its principles, as it emerges from the Talmud. Gerónimo opened the disputation with a veiled threat against the obstinate Jews, and during the disputation he passed to open threats. To the arguments presented by the Jews, he retorted by accusing them of heresy against their own religion, for which they would be tried by the Inquisition. In this heavy atmosphere, the Jewish delegates were overtaken by fear and confusion and occasionally did not dare – or did not succeed – in answering correctly, especially because those replies which did not please the pope aroused vulgar rebukes on his part which only intensified their fears and anxieties. During the disputation new participants appeared on the Jewish side, and their arguments were not always coordinated with the former; besides, the last word was always granted to Gerónimo, so that the impression could be formed that he had the upper hand.

During the first part of the disputation (until March 1414), the discussion revolved around the Messiah and his nature (as in the Disputation of*Barcelona). Its second part concerned the “errors, the heresy, the villainy, and the abuse against the Christian religion in the Talmud,” according to the definition of the initiators of the disputation, and resembled the disputation of Paris, initiated by Nicholas *Donin. The Jews were requested to answer the claims of Gerónimo which appeared in his work that was being used as the basis of the disputation, and to explain various Midrashim which had been collected by Raymond *Martini. After a while, 12 questions were presented to the Jews on the subjects of Jesus, Original Sin, and the causes of the Exile. The discussions on these subjects were prolonged over several months. It was at this stage that some of the most brilliant answers ever given to questions of this type in similar disputations of the Middle Ages were offered.

At the beginning of 1414 Pope Benedict entered the disputation himself and demanded that the procedure be shortened and practical conclusions arrived at. Most of the Jews sought to withdraw from the disputation because during their prolonged absence from home and as a result of the mental strain prevailing among their communities, faith was being undermined and there was rising despair, while the missionary preachings of the monks had succeeded in bringing many Jews to baptism. Zerahiah ha-Levi, Mattathias ha-Yiẓhari, and Astruc ha-Levi, however, presented memoranda in which they refuted all the arguments drawn from aggadot and Midrashim. R. Astruc even dared to point out the injustice inhering in the actual conditions of the disputation. The delegates of the communities were away from their homes for about a year; they became impoverished and tremendous harm was caused to their communities; this may also be regarded as a reason for the failure of the Jews to reply successfully. Gerónimo reacted with words of contempt against the Talmud and the Jews who denied the validity of the aggadah, he argued that they ought to be tried according to their own laws as unbelievers of the principles of their faith.

Throughout the period of the disputation, Jews continually arrived in Tortosa, where they converted to Christianity. The authorities, on their part, intensified their persecutions, and ordered that everything which had been disqualified by Gerónimo should be obliterated from the Talmud. The disputation in itself acted as an incentive for anti-Jewish incitement, and in several towns the inhabitants adopted severe measures in order to force the Jews to convert. Many broke down and accepted baptism. Three works were written after the Disputation of Tortosa in an attempt at soul-searching: Sefer ha-Ikkarim(“Book of Principles”) of R. Joseph Albo, in which the author clarified the religious fundamentals discussed at the disputation; Sefer ha-Emunot (“Book of Beliefs”) by R. *Shem Tov, who regarded the cultivation of philosophy as the cause of conversion; and Iggeret Musar (“Letter of Ethics”) by R.Solomon *Alami, who considered that disrespect toward religion and ethics was the cause of the destruction of Spanish Jewry.

Messianic Jewish teacher in UK
View all posts by richardsh →
This entry was posted in otdimjh and tagged article, HaLorki, otdimjh, tortosa. Bookmark the permalink.