From the Palgrave Dictionary of Anglo-Jewish History

BERNAL, RALPH (c1785–26 August 1854), politician. Of Sephardi background, the son of London-based West India merchant Jacob Bernal (d. 1811), he had only the loosest connection with the Jewish community. He was among several MPs of Jewish descent who served in Parliament before 1858.

Educated at Christ’s College, Cambridge (11th Wrangler), he was called to the Bar by Lincoln’s Inn in 1810. He practised as a barrister and inherited a large estate in the West Indies. He served in Parliament for many years, spending £66,000 on election campaigns. He was Whig MP for Lincoln City (1818–20), for Rochester (1820–41 and 1847–52), for Weymouth (1842–7), and for Rochester (1847–52). He served as President of the British Archaeological Society and was a noted collector of glass and ceramics, forming a collection which sold for £70,000 at his death. 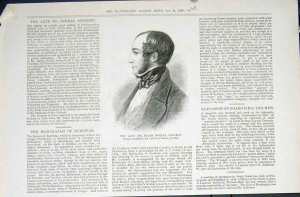 His son with his non-Jewish wife, Ralph Bernal, later Ralph Bernal Osborne (26 January 1808 or 1811–4 January 1882), politician, was educated at Charterhouse and (briefly) at Trinity College, Cambridge. He served as an army officer in Ireland and added Osborne to his name in 1844 after marrying the daughter of Sir Thomas Osborne, Bt.

In the Commons he was noted for his facetious wit and radical views.

Disrael and Osborne were sparring partners. Ralph Bernal Osborne’s political career extended from 1841 to 1874, a period of thirty-three years. During that time he fought nine contested elections, and two election petitions. Six seats he won, and three he lost, and only once was he returned to Parliament without a severe contest. The poll-books of the United Kingdom may be searched in vain for a similar record. Mr. Disraeli once on this subject turned the laugh very successfully against Osborne with a characteristic piece of Parlia­mentary by-play. While reviewing some of his op­ponents’ arguments, he said, ‘With regard to the speech of the hon. member for —– ,’ then hesitating with an air of affected forgetfulness he added, ‘ I really just at this moment forget what constituency the hon. member at present represents ’—a thrust of the rapier which delighted the House, and which no one ap­preciated more than Osborne himself. 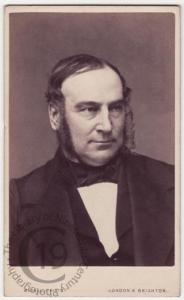 His daughter married the Duke of St Albans. His remote relative [John] Desmond Bernal (10 May 1901–15 September 1971), FRS, Professor of Physics at Birkbeck College, London, became a communist at Cambridge and wrote political tracts.

Reflection: What do Ralph Bernal and his son Ralph Bernal Osborne have to say to us today? I can find very little reference to their faith in Yeshua or their identification as Jews. The contemporary “Hebrew Christian Witness” mentions them, but not with great commendation:

They achieved wealth, fame, political recognition and distinguished roles in government and the life of the country. I would like to have seen more of their testimony to the Messiah and their willingness to speak out on social and political issues that affected their people. But who am I to judge others? I write to discover the history of Jewish believers in Yeshua and the factors that shaped their faith and identity, so that I might learn from the past and avoid making the mistakes others have made – I make enough of my own already. Have mercy, Lord, have mercy. In Yeshua’s name. Amen.

Messianic Jewish teacher in UK
View all posts by richardsh →
This entry was posted in otdimjh and tagged article, bernal, otdimjh. Bookmark the permalink.