Albert Einstein’s religious views have been studied extensively. He said he believed in the “pantheistic” God of Baruch Spinoza, but not in a personal god, a belief he criticized. He also called himself an agnostic, while disassociating himself from the label atheist, preferring, he said, “an attitude of humility corresponding to the weakness of our intellectual understanding of nature and of our own being.”

About Jesus, he was full of admiration, but critical of Christianity.

“As a child I received instruction both in the Bible and in the Talmud. I am a Jew, but I am enthralled by the luminous figure of the Nazarene.”

Einstein accepted the historical existence of Jesus, but not the claim of his divinity:

“Unquestionably! No one can read the Gospels without feeling the actual presence of Jesus. His personality pulsates in every word. No myth is filled with such life.”

He stressed however in a conversation with William Hermanns that, “I seriously doubt that Jesus himself said that he was God, for he was too much a Jew to violate that great commandment: Hear O Israel, the Eternal is our God and He is one!’ and not two or three.”

Einstein lamented, “Sometimes I think it would have been better if Jesus had never lived. No name was so abused for the sake of power!” Nevertheless, he also expressed his belief that “if one purges the Judaism of the Prophets and Christianity as Jesus Christ taught it of all subsequent additions, especially those of the priests, one is left with a teaching which is capable of curing all the social ills of humanity.” 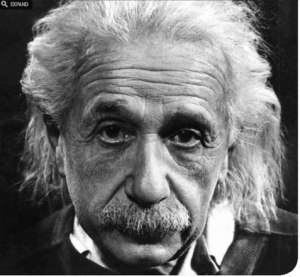 Einstein consistently characterized the idea of a personal God who answers prayers as naive, and life after death as wishful thinking. But his continual references to God — as a metaphor for physical law; in his famous rebuke to quantum mechanics, “God doesn’t play dice”; and in lines like the endlessly repeated, “ Science without religion is lame, religion without science is blind” — has led some wishful thinkers to try to put him in the camp of some kind of believer or even, not long ago, to paint him as an advocate of intelligent design.

Trying to distinguish between a personal God and a more cosmic force, Einstein described himself as an “agnostic” and “not an atheist,” which he associated with the same intolerance as religious fanatics. “They are creatures who — in their grudge against the traditional ‘opium for the people’ — cannot bear the music of the spheres.”

Einstein’s letter sold on Ebay for $404,000n and is a highly priced item. But of even greater value is that of knowing the God who created Einstein, and all things, and has revealed Himself in the Messiah Yeshua.  Einstein’s views show the legacy and quandary many Jewish people face – we cannot accept a traditional understanding of either Judaism or Christianity – and our hearts are restless until we find the living truth of a personal relationship with the God of Israel through the Messiah Yeshua.

O Lord, the way, the truth and the life to all who accept you in faith – open the eyes of our hearts to know you, love you and follow you. In Yeshua’s name we pray. Amen