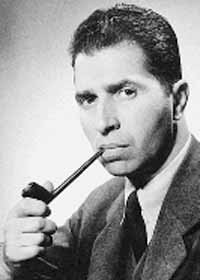 Mortimer Adler(December 28, 1902 – June 28, 2001) was a philosopher, educator, and popular author. He is best known for his classic of American popular culture, “How to Read a Book”.

As a philosopher he worked within the Aristotelian and Thomistic traditions. He lived for the longest stretches in New York City, Chicago, San Francisco, and San Mateo, California. He worked for Columbia University, the University of Chicago, Encyclopædia Britannica, and Adler’s own Institute for Philosophical Research.

Brought up Jewish, he remained for most of his life agnostic, but working within Christian thought. He lectured as a secular Jew in Catholic Universities, and defended traditional (and somewhat right-wing) values. He compiled and edited the series “Great Books of the Western World”.

His heroes were the great philosophers: Aristotle, Thomas Aquinas, John Locke, John Stuart Mill and others, who taught him to think, argue, articulate and make difficult ideas accessible to those without academic training in philosophy. Like Spinoza, whom he also admired, his passion and intensity opened the way for others to search for meaning, truth and value, although for much of his life he did not openly espouse any particular creed.

Born of Jewish parents, in Adler’s pre-college years he was an ethnic-cultural Jew. In college and after he became an agnostic/pagan Thomistic philosopher. Even so, he attended church services with his first wife, Helen, an Episcopalian, after their marriage in the mid-1920s. They divorced in the early 1960s but Adler continued attending services with his second wife, Caroline, who was also Episcopalian. In his early eighties Adler became an Episcopalian in 1984. Shortly thereafter, around 1990 and after, he became notorious as an aged, curmudgeonly promoter of a conservative vision of the great books idea. After Caroline passed in the mid 1990s, Adler made a final conversion to Catholicism before his own death in 2001.

As noted above, Adler was a member of the Episcopal Church of the United States, a variety of the Anglican Church, before he became Roman Catholic. He had converted to Episcopalianism in 1984 after years of self-described “agnosticism”—despite being born of Jewish parents in New York City. In 1992, he pointedly stated that his conversion was not from Judaism “but from being an irreligious person.”

He claimed that he “had no religious upbringing,” despite being taken to synagogue, many times, with his mother and grandmother. Adler’s mother’s family practiced Reform Judaism, while his father was Orthodox. Adler described his father’s practices as a “vestige of the old country.” Lastly, Adler received a Bar Mitzvah. He minimized this event, however, by analogizing it to joining a fraternity or the Boy Scouts.[1]  Adler can most certainly dismiss this, and claim to have lost his Jewish roots in his twenties, but it doesn’t seem correct for him to claim that he “had no religious upbringing.” It was, rather, an upbringing that he rejected. Indeed, his whole retelling of his youth is a little too careful in relation to establishing his credentials as a rebellious secular pagan.

Reflection: So what is he doing in this blog – how did he make history for Messianic Jews today? How do we read his own life as an open book? Is he any more than a typical example of a secularised Jew who eventually buys into the dominant tradition of intellectual and religious thought to which he was exposed? To what extent did he encounter the real meaning of the Messiah, understanding his message and experiencing his resurrection life?

These and other questions are raised when we consider a man like Adler – a populariser rather than an original thinker, yet one whose creativity is a gift from God, one whose personal and philosophical struggles illustrate the path each of us must follow to integrate those diffuse areas of culture, context, personality and faith into one coherent whole; one who, as a Jew, finds his path meandering through the intellectual currents of the age he lives in; and one who finds, somewhat belatedly, a firm bedrock of faith. “Not by might, nor by power”, nor by philosophy or reason, can the Way, the Truth and the Life that is the Messiah Yeshua be known. In his name we pray. Amen.

Conversations with Moishe Rosen in the 1980s about Adler.

Messianic Jewish teacher in UK
View all posts by richardsh →
This entry was posted in otdimjh and tagged adler, article, otdimjh. Bookmark the permalink.