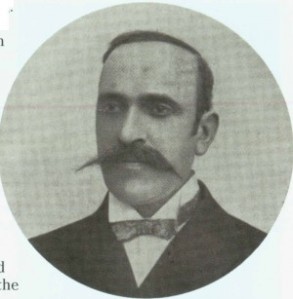 Gidney records “And so it came to pass that Mirza Norollah, a native Jew of Tehran (whose father was a physician to the Shah), converted to the faith of Christ, baptized and trained in the Society’s College, was sent out to take charge of the mission in 1888. He arrived at Tehran on December 4th, and was well received by his friends and relatives. Many came to him to hear an account of his journeys and experiences. On the first Saturday after his arrival he went to his father’s synagogue, which all his relatives attended. The portion of Scripture for that day was taken from Ezekiel xxxvii. After it had been read, he asked to be allowed to talk to the people about it, and, permission being granted, he read the passage again in Hebrew and in Persian, and then proclaimed to them the crucified Jesus as their Messiah and Redeemer.”

Norollah (also Nurullah) came to faith as a young man in the early 1880s after reading a Bible given to his father by Aaron Stern. 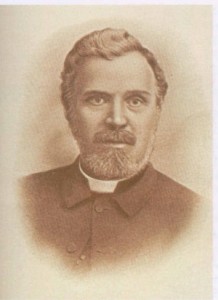 He left Persia in search of Stern, who by then was leading the work at Hebrew College at Palestine Place, London.  Stern clearly remembered visiting the Norollah home and presenting the New Testament to the Court Physician He was overjoyed to see the result of this gift and, on his advice, Mirza was trained in the London Society’s college. Norollah studied and trained until 1888, when he returned to Teheran to take up the work of CMJ.  On his arrival he read in his father’s synagogue, where all his family attended prayers, from the appointed lesson of the day, Ezekiel 37, and spoke of Jesus as the Messiah of Israel. His eldest brother came to faith just weeks after Mirza returned to Persia.  Many others of his family followed, included his nephew, Jollynoos, who later became his right hand in the work of CMJ in Persia.

Norollah established a book shop, schools, regular Sunday services for Jewish believers, and evangelistic meetings on Shabbat – first in Tehran and then also in Isfahan. He visited the Jews in their home, and continued to preach the Messiah in the synagogues.  In Hamadan the Chief Rabbi allowed him to preach in his synagogue on Shabbat.

In 1890 Norollah established a school in Isfahan.  About fifty children attended, and people came to faith – among them a well respected Rabbi.  The rabbi did all he could to support Mirza, encouraging parents to send their children to the Christian school, and providing him with a house for meetings.  However, at the end of the year Norollah was expelled from Isfahan because of false charges, and the school was closed.  Mirza returned to Teheran and spent the next several years traveling around Persia.  In 1897 the school was reopened, with an attendance of 120.

In Teheran schools were opened for boys and girls together with regular Sunday services that included prayer meetings and Bible Study for new believers and enquirers.

In 1919 Mirza Norollah handed the work over to his nephew, Jollynoos.  He died in 1925 after thirty-five years of service.  The ministry continued until the Islamic Revolution.

Prayer: Thank you Lord for this inspiring Iranian Jewish believer in Jesus – his industry, his scholarship, his shining faith. Thank you for the legacy he left, and the many Iranian Jewish believers in Yeshua throughout the world. Lord, we pray for the Jewish community and Jewish believers in Yeshua in Iran, and the Iranian diaspora, that they may have freedom to live out their identity and faith in the knowledge of your purposes for Israel, and your love to all humanity through your Son, the Messiah Yeshua. In his name we pray. Amen

translation of the Bible into Judeo-Persian at the request of the British and Foreign Bible Society.

The Jews of Iran in the Nineteenth Century: Aspects of History, Community … 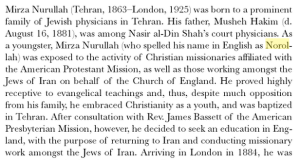 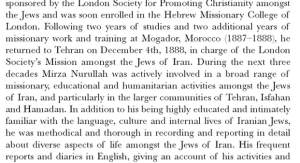