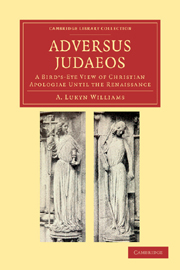 My heartiest thanks are given to my friend and fellow undergraduate of far distant Cambridge days, the Rev. A. Lukyn Williams, Vicar of Guilden Morden, and Examining Chaplain to the Bishop of Durham, for his kindness in revising the proofs and making many suggestions.

He mentions Lukyn Williams several times throughout the History of CMJ:

At the Islington Clerical Meeting in January 1892 the Jewish subject had a place, excellent papers being read by the Revs. C. H. Banning and J. E. Brenan on ” The present condition of the Jews”; and again in 1895, when high class papers on ” The Evangelization of the Jews ” were read by Archdeacon Perowne of Norwich, and the Rev. A. Lukyn Williams. The latter’s illuminating paper on ” Methods,” embracing the experiences gained in London as head of the mission, was fruitful in its excellence.

THIS Period saw some veiy important developments in the work in London, where both in 1891, and again in 1895, radical changes took place. In the former year the Rev. A. Lukyn Williams, who had had a distinguished career at Cambridge, was appointed head of the mission, Principal of the College, and chaplain. It was thought that a triple arrangement of this kind, combining the superin- tendence of all the work under one head, might conduce to the greater efficiency of the mission. Mr. Williams brought to the discharge of his onerous duties a freshness and zeal, and new methods of work, which soon had gratifying results.   He commenced by recognizing the fact that the Jews of London belong to three classes, the wealthy, the middle-class in the East End and elsewhere, and the foreigners, and that if all are to be reached each class must be dealt with in a different way. The wealthy can be influenced only through the press or by the organizations of the parish ; the second class can be visited, especially by non-Jewish workers ; and the third, attracted to a mission hall. To reach the first, a new publication, Jews and Christians, already referred to, was started.

To reach the second, missionaries were sent into all parts of London. For the third clas class, a hall for aggressive evangelistic work was secured at No. 4, Goulston Street, just two doors off the Whitechapel High Street, with a dispensary attached to it. For the more pastoral side of the work, one of the houses in Palestine Place was set apart as a mission centre, and the “Lewis Way” library, which consisted principally of standard Jewish works published before 1825, moved into it. The church, which of recent years had been less and less attended by residents in the neighbourhood, became more and more a special chapel for the mission. The Rev. F. L. Denman (now Secretary), was appointed assistant chaplain, and the Rev. H. O. Allbrook continued to render voluntary aid. The College received a large amount of Mr. Williams’ attention, the Rev. G. C. Daw, now Vicar of St. Mark’s, Dalston, remaining as resident tutor.

A special Committee, composed of experts, with the Rev. A. Lukyn Williams as adviser, is continuously at work revising the existing tracts, and bringing them up to date ;

Reflection and prayer: Lukyn Williams’ works, his commentaries, survey of Adversus Judaeos literature, and writings on Jewish evangelism, mark the high water-mark of 19th century Jewish missions. A gentleman scholar and practitioner, he leaves a standard of scholarship, devotion and wisdom that is much needed today. Deo gratias!

Williams, A. Lukyn, Missions to the Jews, an Historical Retrospect, London, 1897.

With first class hons in theology at Cambridge in 1875, the youthful Williams (ordained deacon 1876, and priest 1877 to a Jesus College living) was commended to Bishop Barker, desperate for a principal of Moore Theological College, Sidney, Australia. Williams began enthusiastically at MTC in July 1878, keen to meet the demand for more ordinands as Sydney grew in population. But enrolments however remained modest, even though diocesan leadership knew that their own college must be the principal source of new clergy. He aimed for a uniform entrance exam, more clearly defined studies focussed on Old Testament, New Testament and church history, and an ‘Inter-Diocesan Board of Examination’ to assess the achievements of ordination candidates. Like his predecessors he battled colonial parsimony until his health declined in 1884 and he was forced to resign. He ‘was able to pursue his labours as scholar and author in the genial atmosphere of Cambridge until his death’ (Loane, Centenary History :60).

Arthur Lukyn Williams (1853-1943) was an English New Testament scholar at Jesus College, Cambridge.[1][2] From 1878 until 1884 he was Principal of Moore Theological College in Sydney, New South Wales. [3] He was also a Christian apologist active in Christian mission to Jews.[4]

Additional books from the extended shelves:

Messianic Jewish teacher in UK
View all posts by richardsh →
This entry was posted in otdimjh and tagged article, cmj, lukyn williams, otdimjh. Bookmark the permalink.