Posted on September 3, 2015 by richardsh 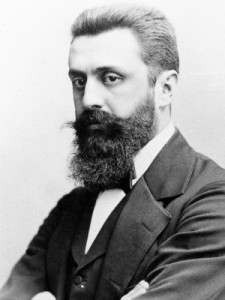 “Were I to sum up the Basel Congress in a word – which I shall guard against pronouncing publicly – it would be this: At Basel I founded the Jewish State. If I said this out loud today l would be greeted by universal laughter. In five years perhaps, and certainly in fifty years, everyone will perceive it”

The First Zionist Congress (Hebrew: הקונגרס הציוני הראשון‎) was the inaugural congress of the Zionist Organization (ZO) (to become the World Zionist Organization (WZO) in 1960) held in Basel (Basle), Switzerland, from August 29 to August 31, 1897. It was convened and chaired by Theodor Herzl, the founder of the modern Zionism movement. [from Wikipedia entry]

The Municipal Casino in Basel where the Congress took place.

The Congress formulated a Zionist platform, known as the Basel program, and founded the Zionist Organization. It also adopted the Hatikvah as its anthem (already the anthem of Hovevei Zion and later to become the national anthem of the State of Israel).

A participant card from the event.

Herzl acted as chairperson of the Congress which was attended by some 200 participants from seventeen countries, 69 of whom were delegates from various Zionist societies and the remainder were individual invitees. Ten non-Jews were also in attendance and were expected to abstain from voting. Seventeen women attended the Congress, some of them in their own capacity, others accompanying representatives. While women participated in the First Zionist Congress, they did not have voting rights; they were accorded full membership rights at the Second Zionist Congress, the following year.

The symbol of the First Congress.

Following a festive opening in which the representatives arrived in formal dress, tails and white tie, the Congress moved onto the agenda. The principal items on the agenda were the presentation of Herzl’s plans, the establishment of the Zionist Organization and the declaration of Zionism’s goals-the Basel program. 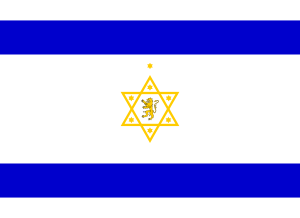 The flag of the First Zionist Congress

At the Congress, Herzl was elected President of the Zionist Organization, with Max Nordau and Moses Gaster two of the three vice-presidents. Also, an Inner Actions Committee and a Greater Actions Committee were elected to run the affairs of the movement between Congresses.

On the second day of its deliberations (August 30), the version submitted to the Congress by a committee under the chair of Max Nordau, it was stated: “Zionism seeks to establish a home for the Jewish people in Palestine secured under public law.” This gave clear expression to Herzl’s political Zionist vision, in contrast with the settlement orientated activities of the more loosely organized Hovevei Zion. To meet halfway the request of numerous delegates, the most prominent of whom was Leo Motzkin, who sought the inclusion of the phrase “by international law,” a compromise formula proposed by Herzl was eventually adopted.

The program, which came to be known as the Basel program, set out the goals of the Zionist movement. It was adopted on the following terms:

“Zionism aims at establishing for the Jewish people a publicly and legally assured home in Palestine. For the attainment of this purpose, the Congress considers the following means serviceable:

Prayer: Thank you Lord for your involvement in the history of all nations, and of your people Israel. Your providential activity is behind every human action, and your purposes are being worked out in human history. May your will be done on earth as it is in heaven, and may your kingdom be established speedily and in our days, in justice, righteousness and peace. In Yeshua’s name we pray. Amen.

Messianic Jewish teacher in UK
View all posts by richardsh →
This entry was posted in otdimjh and tagged article, basel, herzl, otdimjh, zionism. Bookmark the permalink.