“For this reason We must commend those Catholic men who, when the legislative assembly of Hungary was asked two years ago whether it would consider the marriage of Christians with Jews valid, rejected the proposal unanimously and freely and succeeded in having the old marriage law retained. Their vote received the approval of the vast majority of people from all parts of Hungary, proving with admirable testimony that the people thought and felt as they did. May there be Like consent and similar constancy whenever the Catholic cause is in controversy, for then victory will be at hand.” 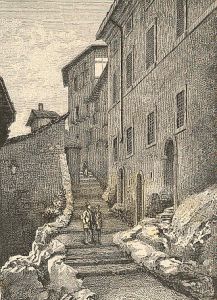 The house in Carpineto, in which the Pecci brothers grew up

Pope Leo XIII (Italian: Leone XIII) was born Vincenzo Gioacchino Raffaele Luigi Pecci (2 March 1810 – 20 July 1903) to an Italian comital family, reigned from 20 February 1878 to his death in 1903. He was the oldest pope (reigning until the age of 93), and had the third longest pontificate, behind that of Pius IX (his immediate predecessor) and John Paul II. He is the most recent pontiff to date to take the pontifical name of “Leo” upon being elected to the pontificate. [Wikipedia entry]

He is well known for his intellectualism, the development of social teachings with his famous papal encyclical Rerum novarum and his attempts to define the position of the Catholic Church with regard to modern thinking. He influenced Roman Catholic Mariology and promoted both the rosary and the scapular. He issued a record eleven encyclicals on the rosary earning the moniker the “Rosary Pope”, approved two new Marian scapulars and was the first pope to fully embrace the concept of Mary as mediatrix. He was the first pope to never have held any control over the Papal States, after they were dissolved by 1870. 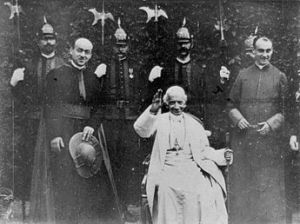 Leo XIII died on July 20, 1903 at the age of 93 and was briefly buried in the grottos of Saint Peter’s Basilica before his remains were later transferred to the Basilica of Saint John Lateran.

In addition to affirming Catholic social teaching preventing the marriage of Catholics to non-Catholics, including Jews, he upheld the prescription of “The Talmud and other Jewish books” by keeping it on the Index Expurgatorius  of books that must “be entirely condemned and that they must remain always condemned and prohibited, and that his Constitution about these books must be perpetually and inviolably observed.”

Lord, forgive our intolerance of others, our demonizing and prejudices against the other, whatever our differences with them. Help us not to discriminate against others on the basis of their identities, but rather to show Yeshua’s love to all.  In his name we pray.

To the Bishops of Hungary.
Venerable Brothers, Greetings and Apostolic Benediction.

We have long and ardently desired an opportunity to address you with an apostolic letter. Just as We have addressed the bishops of many other nations, We desire to inform you of Our plans, which concern the prosperity of the Christian cause and the salvation of the Hungarian nation. These days present Us with an excellent opportunity, since Hungary is celebrating the liberation, two centuries ago, of Budapest. – That victory will stand out forever in the memory of the Hungarian people. It was granted to your ancestors, because of their strength and perseverance, to recapture their capital city, which for a century and a half had been occupied by their enemies. That the grace and memory of this divine blessing might remain, Pope Innocent XI justly decreed a celebration throughout all Christendom in honor of St. Stephen, the first of your apostolic kings, on the second day of September, the anniversary of this great event. Moreover it is well-known that the Apostolic See took a significant part in the almost spontaneous victory three years before over the same foe at Vienna. This victory, rightly attributed in great part to the apostolic efforts of Pope Innocent, began the decline of the influence of the Mohammedans in Europe. – Besides, even before that age and under similar circumstances, Our predecessors assisted the Hungarian forces with counsel, aid, money, and treaties. From Callistus III to Innocent XI, many Roman Ponfiffs are recorded whose names deserve to be honored for their activity in such affairs. Let Clement VIII serve as an example. When Stregan and Vincentgraz were liberated from the domination of the Turks, the highest councils of the kingdom decreed that public thanks be given to him for he alone had come to their aid opportunely at a time when the situation was almost beyond hope. Therefore, just as the Apostolic See never failed the people of Hungary whenever they had to fight the enemies of religion and Christian morality, so now, when happy memories inspire the people, We gladly join you in sharing their joy. Taking into account the differing conditions of time, We desire to confirm the people in their profession of the Catholic faith and also to assist them in warding off common dangers. In this way We shall serve the public good.

Concern for the Faithful

(17) In the latest edition of this Index Expurgatorius “by order of Our Holy Lord Pope Leo XIII now happily governing the Church of Christ,” issued in 1887, “The Talmud and other Jewish books” are proscribed as follows: “Although in the Index issued by Pope Pius IV, the Jewish Talmud with all its glossaries, annotations, interpretations and expositions were prohibited; but if published without the name Talmud and without its vile calumnies against the Christian religion they could be tolerated; however Our Holy Lord Pope Clement VIII in his Constitution against impious writings and Jewish books, published in Rome in the year of Our Lord 1592 . . . proscribed and condemned them: it was not his intention thereby to permit or tolerate them even under the above conditions; for he expressly and specially stated and willed, that the impious Talmudic, Cabalistic and other nefarious books of the Jews be entirely condemned and that they must remain always condemned and prohibited, and that his Constitution about these books must be perpetually and inviolably observed.”