Sir Leon Levison presided at this historic moment in the history of the Hebrew Christian Alliance, as storm clouds loomed over the Jewish people in Europe, Messianic Congregations (known as Hebrew Christian Churches) were being formed, and a Hebrew Christian Colony and and immigration to Israel was encouraged.

B. The formation of Hebrew Christian Church  – including Articles of Faith, Constitution and Liturgy for Ordination of Elders and Deacons:

The aims of the Commission on the Hebrew Christian Church were:

“1. To make a survey of the numbers of Hebrew Christians in the World, their locations and if possible their Denominational connections. 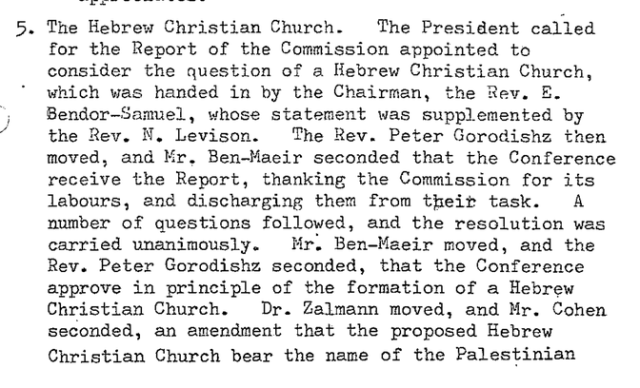 D. Telegram to the King thanking him for attending the 1st International Conference in 1925 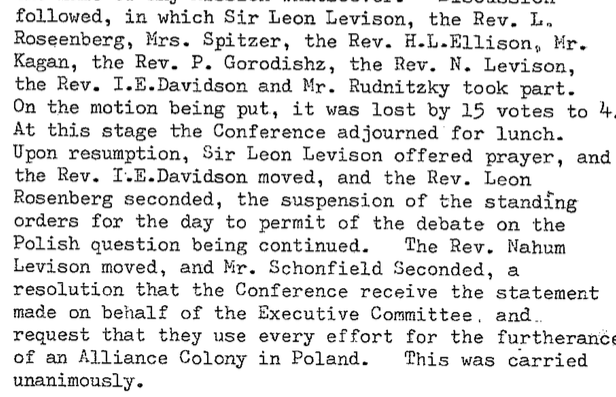 Reflection and Prayer: The flowering of the Hebrew Christian movement in the 19th and early 20th centuries was decimated by the Shoah, and here in the 1934 meetings the present problems outweighed the concern for the future possibilities of the State of Israel and the modern Messianic movement. Who knows the future of Israel today, or of the modern Messianic movement, barely 3 generations old?

Master of all worlds

Not because of our righteousness

Do we lay our pleas before you

But because of Your great compassion.

Who are we? What are our lives?

What is our might? What shall we say before You,

LORD our God and God of our ancestors?

Are not all the mighty like nothing before you,

the men of renown as if they had never been,

the wise as if they knew nothing,

and the understanding as if they lacked intelligence?

[from the Sacks Siddur p36]