December 18th, 1836, was an important day, when two converts were admitted to the priesthood, the Rev. F. C. Ewald by the Bishop of London, and the Rev. H. S. Joseph, subsequently missionary at Liverpool, by the Bishop of Chester.

Gidney has much to write about Ewald, as does Bernstein, who was discipled and trained by him. Yet Ewald himself was humble and self-effacing. Bernstein writes with splendid double negatives:

It is somewhat difficult to write a memoir of one who was too modest and retiring to say or to write much about himself: and who left but few materials from which to frame a biography, for it was his express wish that no lengthened life should be written. He felt that his record was in Heaven, and that his works would follow him. As he has been at rest for over thirty years, we think that the time has come when an account of his life should be added to that of other labourers in the same field, in which he was by no means the least conspicuous worker.

One does not have to look far to see the influence and effects of Ewald’s life and ministry – more than 50 references in Bernstein, 75 in Gidney, and many mentions of him in other histories. Here is a summary from HaGefen

Ferdinand Ewald was born in 1801, at the village of Maroldsweisach near Bamberg in Bavaria. His parents were poor and could only afford to educate him at the village school. He made such rapid progress with his studies, however, that some friends raised enough money to send him with his brother, Paulus, to a better school where he displayed a special talent for languages. 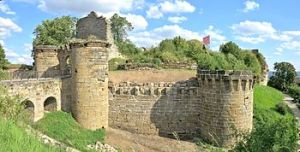 Later on he entered the missionary college at Basle and while there became finally convinced of the truth of Christianity and was baptized at the age of 29, taking the additional name of Christian at his baptism.

After further training at Basle he went on to graduate at the University of Erlangen and in 1829 entered the college then maintained by the London Society for Promoting Christianity among the Jews and joined the staff of the Society in 1832. Early in 1832 he revisited Bavaria in order to see his parents and sister and brother in law. Ewald’s sister told him that she already believed Jesus to be the true Messiah and the Saviour of the world. His brother Paulus had already become a Christian and was indeed Lutheran Pastor in Merkendorf in Bavaria.

From there he went to the Barbary States (Algiers, Tunis, Monastir, Susa etc) where he opened a mission and preached, and sold Bibles. He instituted a service on Sunday in Tunis, and was able to hold many discussions with people in the Jewish community, including rabbis. One rabbi was excommunicated for having visited him.

In 1835 he visited the Jews along the northern cost of Africa. The Gospel was preached to many thousands and thousands of copies of the Bible were placed in their hands, tens of thousands of tracts circulated.

In 1841, after a short visit to England, he was appointed to assist in the London Society’s Mission in Jerusalem. He and his family joined the party of Michael Solomon Alexander, the first Anglican Bishop to Jerusalem. In his memoirs he tells of this journey, and of his subsequent ministry in the land of Israel. He worked in Jerusalem for ten years, visiting Jews in their workplaces, their hopes and in their synagogues.

One of the most interesting stories Ewald tells has to do with three rabbis who came to faith. They suffered much persecution and hardship even before they stepped out openly in faith. One was unable to withstand the intense pressure, and placed himself back under the authority of the rabbis. Two, however, went on to become strong believers and even entered full time ministry of the Gospel. They were baptised together with two others, Isaac Paul Hirsch and Simon Peter Fraenkel. The Rev. John Nicolayson, the head of the Society’s mission, referring to the event, wrote: “It is not a small thing, that the apparently impenetrable phalanx of rabbinism at Jerusalem has thus actually been broken into; and two Jerusalem rabbis been incorporated into the restored Hebrew Christian church on Mount Zion….”

Ewald witnessed other interesting events at Jerusalem, which had a great bearing upon the subsequent history of the Society; namely, the baptism of John Moses Eppstein, the nephew of one of the rabbis, and the ordination of Tartakover, A.J. Behrens, Sternchuss, Murray Vicars, and Aaron Stern.

On January 16, 1844, tragedy struck the Ewald home and Ferdinand’s wife died at the age of 25, leaving three very young children, one of them just a babe in arms. Ewald was unable to continue his work while caring for his small children, and returned to England where his parents-in-law took on the care of their grandchildren. However, on his remarriage in 1846 he returned with his family to Jerusalem.

In 1851 Ewald’s health failed and he was obliged to leave the land of Israel and return to London. There he became the London Society’s senior missionary, where he served for the next nineteen years. He at once made his way into the hearts and homes of many Jews and in 1853 founded the “Wanderer’s Home” an institution which provided a home for poor enquiring Jews who had been cut off by their families. There can be no doubt that such an institution was needed at the time for within five years of its formation 303 Jews and Jewesses had found a home there and of these 150 were baptized. Ewald claimed that out of a Jewish population of 50,000 in England, some 3,000 were believers. In London alone there were eleven Jewish ministers.

Ewald died at Gipsy Hill, London, 1874, at the age of 73 years. Above is the memorial to him in Christchurch Spitalfields.

Prayer: Thank you Lord for this distinguished and influential servant, devoted to his Messiah and his people. His character, life and ministry shine through the context of his day and the history of his times. Help us to learn the lessons of your grace and walk in the same humble discipleship. Help us also to recognise the constraints and difficulties of his day – the theological undermining of Jewish expressions of faith in Yeshua, the historic legacy of Christian anti-Judaism, and the cost many Jewish disciples had to pay to be true to their people, their identity and their Messiah. Help us not to blame them for their shortcomings, or see ourselves as superior, but rather, as Ewald did, to work out our calling in the context of the Messiahship of Yeshua and the ongoing election of Israel. In the name of Yeshua, the Hope of Israel, we pray. Amen.