15 July 1930, Birth of Jacques Derrida and the Theological Genealogies of Modernity #otdimjh

Posted on July 14, 2021 by richardsh
For those who attended online the recent conference on Theological Genealogies of Modernity an important reminder today of the birth of Jacques Derrida on this day in Messianic Jewish history. I have come more and more to appreciate that his engagement in the philosophical project of the deconstruction of metanarratives such as those of Christianity and Judaism, is not to be avoided but rather welcomed as a tool for the construction Messianic Jewish theology 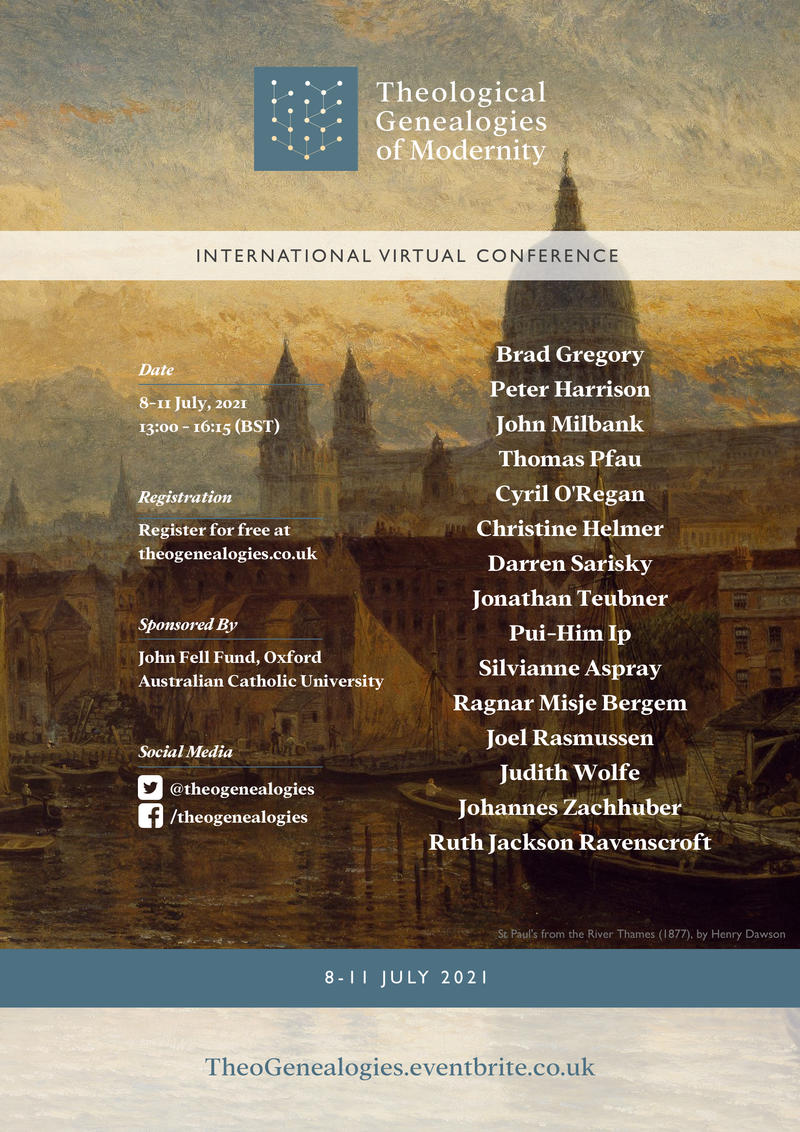 Genealogies of modernity are broad narrative accounts of the rise and nature of our present cultural condition. Theology nearly always features, in some way or another, in narratives about the formation of modernity, even if its role is just being a discourse and set of practices that was gradually marginalized by the onset of a more secular age. This conference gathers together an international team of scholars to explore genealogies of modernity sympathetically and to evaluate them critically. The contributors will discuss a range of important figures and focused topics, and they will pay special attention to stories that are often, though perhaps unhelpfully, understood as decline narratives—accounts of modernity that do not associate it unambiguously with progress. So-called decline genealogies have significant influence within theology across several confessional traditions, but like any narrative with the massive scope of a genealogy of modernity, making a case for them is necessarily complex. How are “decline” narratives and other accounts constructed? If these stories seek to do something more than just to describe historical processes, how do subtly normative dimensions enter into them? How do genealogical narratives look from the perspective of constituencies that are often marginalized?

JACQUES DERRIDA (1930–2004) was a French philosopher and literary critic. Born on 15 July 1930 in El-Biar, Algeria, he was expelled from his lycée by Algerian administrators who were anxious to implement anti-Semitic quotas set by the Vichy government. In 1949 his family moved to France. Beginning in 1952 he was a student at the École Normale Superiéure in Paris where he studied under Michel Foucault and Louis Althusser. Later he studied at the Husserl Archive in Leuven, Belgium where he completed his aggregation. Later he became a lecturer there. [Dan Cohn-Sherbok: Fifty Key Jewish Thinkers, 52-54]

During the Algerian War of Independence, Derrida taught children of soldiers. Following the war, he was associated with the Tel Quel group of literary and philosophical theorists. From 1960 to 1964 he taught philosophy at the Sorbonne, and from 1964 to 1984 at the École Normale Superiéure. He completed his These d’Etat in 1980; this was published in English as The Time of a Thesis: Punctuations. Until his death in 2004 he was director of studies at the École des Hautes Études en Sciences Sociales in Paris. With François Châtelet and others, he served as co-founder of the International College of Philosophy. From 1986 he served as Professor of Philosophy, French and Comparative Literature at the University of California at Irvine. Derrida was a member of the American Academy of Arts and Sciences and in 2001 received the Adorno-Preis from the University of Frankfurt.

Derrida’s earliest manuscript dealt with Edmund Husserl; it was submitted for a degree in 1954 and was later published as The Problem of Genesis in Husserl’s Phenomenology. In 1962 he published Edmund Husserl’s Origin of Geometry: An Introduction. Derrida’s first major contribution to the international academic community was his essay ‘Structure, Sign and Play in the Discourse of the Human Sciences’ which was delivered to a conference at Johns Hopkins University in 1966. The conference dealt with structuralism, which was then widely discussed in France but was only becoming familiar to departments of French and comparative literature in the United States. Derrida’s lecture charted the accomplishments of structuralism, but also expressed reservations about its limitations.

In 1970 the conference proceedings were published as The Structuralist Controversy. At the conference Derrida met Paul de Man and Jacques Lacan. In 1967 Derrida published three collections of work: Of Grammatology; Writing and Difference; and Speech and Phenomena. These contained studies of: philosophers such as Rousseau, Saussure, Husserl, Lévinas, Heidegger, Hegel, Foucault, Bataille and Descartes; anthropologists such as Levi-Strauss; psychoanalysts, including Freud; and writers such as Edmond Jabés and Antonin Artaud. In these early works Derrida set out the principles of deconstructionism in an attempt to illustrate that the arguments put forward by their subject matter exceeded and contradicted the oppositional parameters in which they were located. The next five years of work were collected in two publications: Dissemination and Margins of Philosophy; in addition, a collection of interviews, published in 1981 as Positions, appeared.

On 14 March 1987 Derrida presented at the International College of Philosophy conference an essay entitled ‘Heidegger: Open Questions’, which was later published as Of Spirit. This work demonstrates, in response to the debate about Heidegger’s Nazism, the transformation of Derrida’s philosophical inheritance. In it he traced the shifting role of Spirit through Heidegger’s work, and also considered three fundamental and recurring elements of Heideggeran philosophy: the distinction between human beings and animals; technology; and the privilege of questioning as the essential nature of philosophy.

Derrida’s essay ‘Structure, Sign and Play in the Discourse of the Human Sciences’ which he published in 1966 was the starting point of what is Derrida’s most important contribution: deconstruction. Basically this concept is an attempt to open a text to a range of meanings and interpretations; its method is to take binary oppositions within a text and illustrate that they are not as stable as might appear. In fact the two opposed notions are fluid; as a consequence, the meaning of the text is similarly fluid. This fluidity is a legacy of traditional metaphysics founded on oppositions that seek to establish a stability of meaning through conceptual absolutes where one term is elevated to a status that designates its opposite.

According to Derrida, these hierarchies are silently challenged by the texts themselves, where the meaning of a text depends on this contradiction. The aim of the critic is to show that this dialectical stability is subverted by the text’s internal logic. Deconstruction thereby leads to new interpretations of philosophical and literary texts. No meaning is ever fixed; rather, the only thing that ensures there is a sense of unity within a text is what Derrida refers to as ‘the metaphysics of presence’, where presence is granted the privilege of truth.

Although Derrida’s writings have had a profound influence, analytic philosophers and scientists have been critical of his approach. Some of his detractors regard his work as non-philosophical or as pseudophilosophy. Supporters of Derrida maintain that such criticism is circular – detractors of Derrida propose a system of evaluating philosophy that is antithetical to Derrida, and then criticize Derrida for not following it. In their view, these philosophers fail to recognize the complexity of Derrida’s work. Commenting on such criticism, Derrida wrote in ‘Following Theory’:

You also asked me, in a personal way, why people are angry at me. To a large extent, I don’t know. It’s up to them to answer. To a small extent I know: it is not usually because people are angry at me personally, but rather they are angry at what I write. They are angry at my texts more than anything else, and I think it is because of the way I write – not the content, or the thesis. They say that I do not obey the usual rules of rhetoric, grammar, demonstration, and argumentation.

Despite such criticism, Derrida has had a major impact on academics in a wide range of fields. Deconstruction has been used in such diverse fields as law, politics, literary theory and criticism, and philosophy.

Reflection and Prayer: Messianic Jews have yet to come to terms with the life and significance of this pivotal Jewish thinker. But his work has paved the way for postmodern thought, identity and expression, something the Messianic Jewish movement is indebted to as a child of its time. Derrida’s playful indeterminacy is both threatening and fascinating, and serious theological reflection demands an engaged response to the effect of his work. May Messianic Jews and others not flinch from such work, and may Derrida’s contribution be appreciated, appropriately responded to, and developed further. In Yeshua’s name we pray. Amen.

A more accurate title for this book would have been The Non-Jewish Derrida.

Portrait of Jacques Derrida as a Young Jewish Saint

Who can say “I am Jewish?” What does “Jew” mean? What especially does it mean for Jacques Derrida, founder of deconstruction, scoffer at boundaries and fixed identities, explorer of the indeterminate and undecidable? In Portrait of Jacques Derrida as a Young Jewish Saint, French feminist philosopher Hélène Cixous follows the intertwined threads of Jewishness and non-Jewishness that play through the life and works of one of the greatest living philosophers.

Cixous is a lifelong friend of Derrida. They both grew up as French Jews in Algeria and share a “belonging constituted of exclusion and nonbelonging”–not Algerian, rejected by France, their Jewishness concealed or acculturated. In Derrida’s family “one never said ‘circumcision’but ‘baptism,’not ‘Bar Mitzvah’but ‘communion.’” Judaism cloaked in Catholicism is one example of the undecidability of identity that influenced the thinker whom Cixous calls a “Jewish Saint.”

An intellectual contemporary of Derrida, Cixous’s ideas on writing have an affinity with his philosophy of deconstruction, which sought to overturn binary oppositions–such as man/woman, or Jew/non-Jew–and blur boundaries of exclusion inherent in Western thought. In portraying Derrida, Cixous uses metonymy, alliteration, rhyme, neologisms, and puns to keep the text in constant motion, freeing language from any rigidity of meaning. In this way she writes a portrait of “Derrida in flight,” slipping from one appearance to the next, unable to be fixed in one spot, yet encompassing each point he passes. From the circumcision act to family relationships, through Derrida’s works to those of Celan, Rousseau, and Beaumarchais, Cixous effortlessly merges biography and textual commentary in this playful portrait of the man, his works, and being (or not being) Jewish.

Hélène Cixous is one of today’s best-known feminist theorists and author ofComing to Writing and Other Essays, The Newly Born Woman, and Three Steps on the Ladder of Writing (Columbia), as well as fiction and plays. Beverley Bie Brahic is a translator and poet living in Paris.