Still reeling from the shock, terror and trauma of the Holocaust, Christians began the painful but much needed task of re-visioning their historic relationship with the Jewish people, renouncing the ‘teaching of contempt’ and recognising the disastrous effects of supersessionism.

In the summer of 1947, 65 Jews and Christians from 19 countries gathered in Seelisberg, Switzerland. They came together to express their profound grief over the Holocaust, their determination to combat antisemitism, and their desire to foster stronger relationships between Jews and Christians. They denounced antisemitism both as a sin against God and humanity and as a danger to modern civilization. And to address these vital concerns, they issued a call in the form of 10 points to Christian churches to reform and renew their understandings of Judaism and the relationships between Judaism and Christianity. 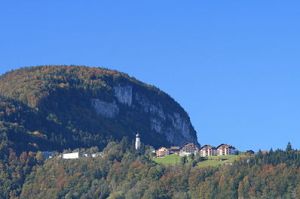 Among the 70 participants from 17 countries were:

At the time of this conference, the Christians undertook a re-examination of Christian teaching with regards to the Jews and Judaism. They measured the extent of Christian responsibility in the Nazi genocide and understood that Christian teaching had to be urgently corrected. They prepared ten points, largely inspired by the eighteen proposals of the historian Jules Isaac to eradicate prejudices against the Jews.

International Council of Christians and Jews

The following statement, produced by the Christian participants at the Second conference of the newly formed International Council of Christians and Jews, was one of the first statements following World War II in which Christians, with the advice and counsel of Jews, began to come to terms with the implications of the Shoa.

AN ADDRESS TO THE CHURCHES

We have recently witnessed an outburst of antisemitism which has led to the persecution and extermination of millions of Jews. In spite of the catastrophe which has overtaken both the persecuted and the persecutors, and which has revealed the extent of the Jewish problem in all its alarming gravity and urgency, antisemitism has lost none of its force, but threatens to extend to other regions, to poison the minds of Christians and to involve humanity more and more in a grave guilt with disastrous consequences.

The Christian Churches have indeed always affirmed the un-Christian character of antisemitism, as of all forms of racial hatred, but this has not sufficed to prevent the manifestation among Christians, in various forms, of an undiscriminating racial hatred of the Jews as a people.

This would have been impossible if all Christians had been true to the teaching of Jesus Christ on the mercy of God and love of one”s neighbour. But this faithfulness should also involve clear-sighted willingness to avoid any presentation and conception of the Christian message which would support antisemitism under whatever form. We must recognise, unfortunately, that this vigilant willingness has often been lacking.

We therefore address ourselves to the Churches to draw their attention to this alarming situation. We have the firm hope that they will be concerned to show their members how to prevent any animosity towards the Jews which might arise from false, inadequate or mistaken presentations or conceptions of the teaching and preaching of the Christian doctrine, and how on the other hand to promote brotherly love towards the sorely-tried people of the old covenant.

Prayer and reflections: Such statements seem obvious today, but then were radical in their recognition of the need to redress the wrong thoughts and actions of the past. Yet even today there is still much work to be done for Christians and Jews to have a right understanding of the ‘indissoluble bond’ between them, and Messianic Jews have a significant role to play in promoting mutual understanding and bringing them together. Lord, help us to serve you, your Church and your World, Israel and the nations, in ways that honour you and glorify your name. In Yeshua’s name we pray. Amen.