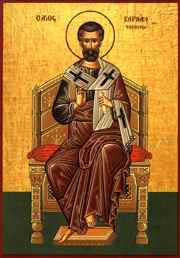 Prophet, Disciple, Apostle to Antioch and Cyprus, Missionary, and Martyr

A Jew born in Cyprus, who received the Holy Spirit, sold all he had, and gave it to the Twelve. He introduced Paul (formerly Saul the Persecutor) to Peter, and accompanied him on many of his travels, preaching the Gospel and converting many. Tradition says that he carried the Gospel to Milan, and was stoned (or burned) to death by a mob in Cyprus.

“If it rains on St. Barnabas Day, it is good for grapes.”

“On St. Barnabas Day, it is time to cut your hay.”

“St. Barnabas oft times brings a tempest” [for which the good saint is invoked against hailstorms, not least of which is a prayer to leave the growing grain standing] 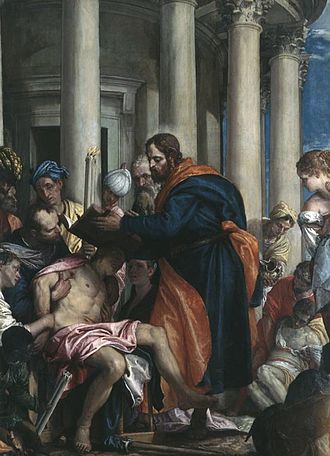 Barnabas (Greek: Βαρνάβας –Heb. ‘son of encouragement’), born Joseph, was an early Jewish disciple of Yeshua, prominent in Jerusalem. According to Acts 4:36 Barnabas was a Cypriot Jew. Named an apostle in (Acts 14:14), he and Paul the Apostle undertook missionary journeys together.They traveled together (c 45-47), and participated in the Council of Jerusalem (c 50). Barnabas and Paul successfully evangelized among the “God-fearing” nations who attended synagogues in various Hellenized cities of Anatolia. 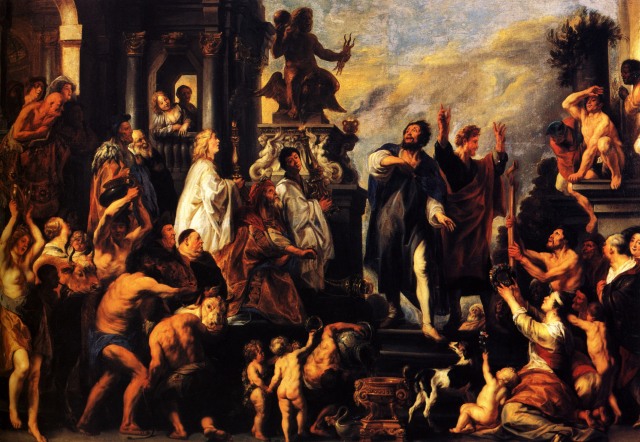 Barnabas’ story appears in the Acts of the Apostles, and Paul mentions him in some of his epistles. Tertullian named him as the author of the Epistle to the Hebrews, but this and other attributions are conjecture. Clement of Alexandria and some scholars have ascribed the Epistle of Barnabas to him, but his authorship is disputed. 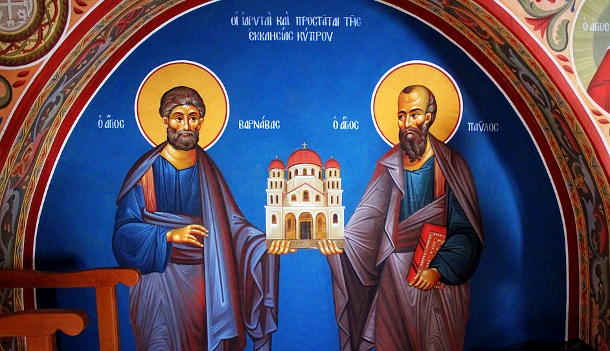 Although the date, place, and circumstances of his death are historically unverifiable, Christian tradition holds that Barnabas was martyred at Salamis, Cyprus, in 61 AD. He is traditionally identified as the founder of the Cypriot Orthodox Church. The feast day of Barnabas is celebrated on June 11.

Barnabas is usually identified as the cousin of Mark the Evangelist on the basis of Colossians 4. Some traditions hold that Aristobulus of Britannia, one of the Seventy Disciples, was the brother of Barnabas.

As summarized in the Catholic Encyclopedia: “With the exception of St. Paul and certain of the Twelve, Barnabas appears to have been the most esteemed man of the first Christian generation. St. Luke, breaking his habit of reserve, speaks of him with affection, “for he was a good man, full of the Holy Ghost and of Faith”. His title to glory comes not only from his kindliness of heart, his personal sanctity, and his missionary labours, but also from his readiness to lay aside his Jewish prejudices, in this anticipating certain of the Twelve; from his large-hearted welcome of the Gentiles, and from his early perception of Paul’s worth, to which the Christian Church is indebted, in large part at least, for its great Apostle. His tenderness towards John Mark seems to have had its reward in the valuable service later rendered by him to the Church.”

Barnabas is usually identified as the cousin of Mark the Evangelist on the basis of Colossians 4. Some traditions hold that Aristobulus of Britannia, one of the Seventy Disciples, was the brother of Barnabas.

Prayer: Thank you Lord for this key Jewish believer in Yeshua, whose skills and gifts enabled Paul’s ministry to flourish, and who brought such blessing to the Messianic communities of the ancient world. Raise up for us similar leaders and encouragers. In Yeshua’s name we pray. Amen.