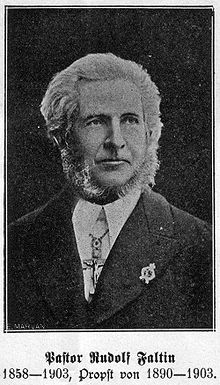 Rudolf Ernst Karl Faltin (born May 21, Jul. / 2 June 1830 Greg, in Riga ; died 27 January 1918 in Riga) was a Protestant pastor and a missionary . His influence over Joseph Rabinowitz and Rudolph Herman Gurland, amongst others, shows that he himself played a remarkable role in the formation of the early Messianic Jewish movement. He is mentioned at least sixteen times in Raymond Lillevik’s important book on Gurland, Lucky and Lichtenstein, Apostates, Hybrids, or True Jews? Jewish Christians and Jewish Identity in Eastern Europe, 1860–1914. 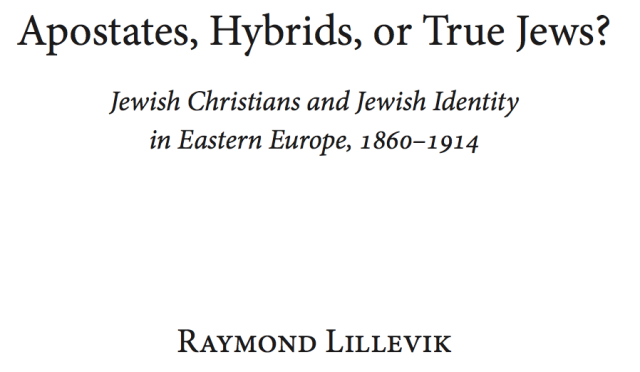 From 1852-1855 Faltin studied theology in Dorpat (Tartu). After that, he worked for two years from 1856-58 as a parish assistant in Arkhangelsk in the evangelical community before 1859 his ordination was in Riga. He went to Chisinau (Kishinev) in the former Bessarabia (now Chisinau in Moldova ), where he held numerous spiritual tasks. He was a military chaplain working for the Russian military stationed there.

He also served as an evangelical church pastor the parish of the Bessarabian Germans before in Kishinev. In addition, he supervised the far-flung Lutheran communities of the parish in the middle, western and north ofBessarabia. In addition, he was teacher of religion at the high school in Kishinev. In 1890 he became the dean of the First South Russian Probst district appointed by the Protestant Church, which was part of the consistory in St. Petersburg. Here he was chaplain of all pastors who were active in the Bessarabian Lutheran congregations. In 1903 retired for reasons of age and he moved back to Riga. Rudolf Faltin is known mainly as a successful missionary to the Jews in the Russian Jewish community. He was the agent of the London Society. His brother was Alexander Faltin.

Rudolph Faltin was married three times. His grave is in Mitau (Jelgawa).

Prayer: Thank you Lord for this devoted servant of yours, who was in the right place at the right time to have a significant influence on some of the founder and anticipators of the modern Messianic Jewish movement. Help us to understand the times and seasons in which we live, and to play our parts in your unfolding purposes for your people Israel and all nations. In Yeshua’s name we pray. Amen.

On April 26, 1864, Gurland and his wife were baptized by Pastor Faltin. In accordance with church tradition and Russian law, their names were changed. That Gurland chose “Rudolf Hermann” indicates that the minister was his godfather. Marie was named after Faltin’s wife, Emma. The law in 1850 did not allow Russian Jewish converts to take new surnames.(Raymond Lillevik, Apostates, Hybrids, or True Jews? Jewish Christians and Jewish Identity in Eastern Europe, 1860–1914, 56)

Rabinowitz himself was accused by Faltin of “Ebionitism” (though curiously, Faltin nonetheless praised his effective evangelistic preaching!) (Kjær-Hansen 1995, 142).

(fromBernstein) Friedman, Rev. George, a convert of Pastor Faltin, in Kischineff, became his assistant there about 1885. He then translated the Lutheran Catechism into Hebrew. Having afterwards sojourned for a time in Jerusalem, he went from there to London, and was after a while appointed by the British Society as missionary at Wilna, and he has since been doing faithful work for the Master in various towns in Russia. In 1895, the year of the great and horrible pogroms, he rendered great and immortal service by consoling and supporting the poor suffering Jews.

Gurland, Rev. Rudolf Hermann, born in Wilna, 1836, of a family which were Spanish Gentile Christians, who became Jews and had fled from the Inquisition at the beginning of the eighteenth century into Russia. The father was a strictly orthodox and bigoted Jew, and sent his son to various yeshivas (rabbinical colleges), so that in 1857 he received the title of Doctor, and was called to be the President of the Seminary at Berditscheff, where he remained till 1860. He tried at first to introduce reform in the Synagogue, and wrote a work under the title “Das Judenthum und die Reformversuche des 17 und 18 Jahrhundert” (only in M.S.), but won no sympathy for his attempt. Meeting a traveller in 1862, he received from him a Hebrew New Testament, and at the same time learned from him about Pastor Faltin’s missionary activity at Kischineff. He went there and became rabbi of a congregation. One day he came to Faltin and asked him if he could get him pupils for caligraphy and drawing, and showed him some specimens of his work. Faltin tried to do so but failed, and then proposed that they should read the Hebrew Bible[251]together. Gurland agreed, but made it a condition that the main issue between Judaism and Christianity should not be introduced. Some time passed in reading book after book of the Old Testament, and Gurland gave no sign of any change in him. They were reading Isaiah liii. for the second time. When Faltin finished, Gurland said, “Read it over again,” but he could not wait till he had done so, because he was inwardly moved, and went home in silence. Faltin then fell on his knees and earnestly prayed that God might open the eyes of the rabbi to see Christ in all His glory. The next time Gurland came, he asked Faltin to read again the same chapter; and then he could no longer resist the striving of the spirit within his heart, and exclaimed, “I do not know what it is, I now find much in the Bible which I have not found before, although I know it by heart. The chapter must refer to your Jesus, and I must soon acknowledge that He is the promised Messiah.” The result of this meeting was, that the rabbi became the pupil of the pastor, receiving frequent instruction from him in the doctrines of the Gospel. But this frequent intercourse between them could not fail to be observed by the Jews, yet they at first had not the slightest suspicion of the rabbi’s intention, but on the contrary thought that Faltin was inclined to embrace Judaism. In fact, one of them told this to one of his congregation. This man came to the pastor and questioned him about it, and was assured by him that he would never deny his Saviour, but it was possible that Gurland might embrace Christianity. Several[252] rabbis came now to Gurland and, like the Protestant, asked him whether Faltin wished to become a Ger (proselyte) to Judaism. This brought the matter to a climax, and he confessed before them all that Jesus was the Messiah and proved his convictions from the Bible. They cried, “You have a false Bible,” but he answered, “Compare it with your own and see whether it is false.” What he had to suffer afterwards, need not here be described. He and his wife were baptized on Easter Sunday, 1864, before a large congregation of Christians and Jews. He then studied theology in Berlin, returned to Kischineff and became assistant pastor to Faltin, when many Jewish converts were the result of their labours. Gurland was later chief pastor at Mitau, working at the same time among the Jews. His latter years were devoted to spreading the New Testament in Wilna, Odessa and the Baltic provinces, under the auspices of the Mildmay Mission to the Jews. Professor Delitzsch called him “A noble soul.”