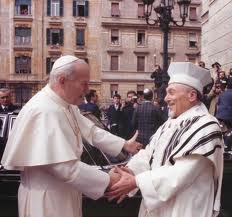 John Paul II eagerly steps forward to embrace the rabbi of Rome: the beginning of his visit to the Synagogue of Rome on April 13, 1986.

“The Church of Christ discovers her “bond” with Judaism by “searching into her own mystery”, (cf. Nostra Aetate, ibid.). The Jewish religion is not “extrinsic” to us, but in a certain way is “intrinsic” to our own religion. With Judaism therefore we have a relationship which we do not have with any other religion. You are our dearly beloved brothers and, in a certain way, it could be said that you are our elder brothers.” 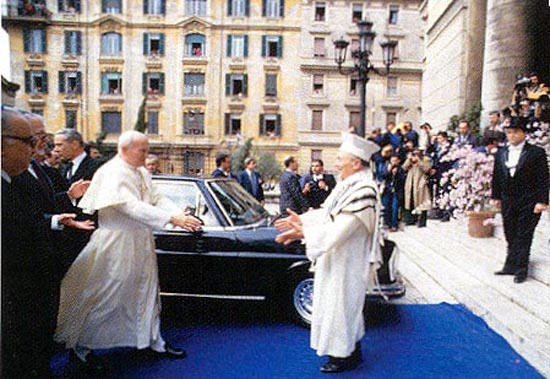 THE ROOTS OF ANTI-JUDAISM IN THE CHRISTIAN ENVIRONMENT

This gathering in a way brings to a close, after the Pontificate of John XXIII and the Second Vatican Council, a long period which we must not tire of reflecting upon in order to draw from it the appropriate lessons. Certainly, we cannot and should not forget that the historical circumstances of the past were very different from those that have laboriously matured over the centuries. The general acceptance of a legitimate plurality on the social, civil and religious levels has been arrived at with great difficulty. Nevertheless, a consideration of centuries-long cultural conditioning could not prevent us from recognizing that the acts of discrimination, unjustified limitation of religious freedom, oppression also on the level of civil freedom in regard to the Jews were, from an objective point of view, gravely deplorable manifestations. Yes, once again, through myself, the Church, in the words of the well-known Declaration Nostra Aetate (No. 4), «deplores the hatred, persecutions, and displays of anti-Semitism directed against the Jews at any time and by anyone”; I repeat: “by anyone».

I would like once more to express a word of abhorrence for the genocide decreed against the Jewish people during the last War, which led to the holocaust of millions of innocent victims.

When I visited on 7 June 1979 the concentration camp at Auschwitz and prayed for the many victims from various nations, I paused in particular before the memorial stone with the inscription in Hebrew and thus manifested the sentiments of my heart: «This inscription stirs the memory of the People whose sons and daughters were destined to total extermination. This People has its origins in Abraham, who is our father in faith (cf. Rom 4,12), as Paul of Tarsus expressed it. Precisely this People, which received from God the commandment: “Thou shalt not kill”, has experienced in itself to a particular degree what killing means. Before this inscription it is not permissible for anyone to pass by with indifference» (Insegnamenti 1979, p. 1484). The Jewish community of Rome too paid a high price in blood.

And it was surely a significant gesture that in those dark years of racial persecution the doors of our religious houses, of our churches, of the Roman Seminary, of buildings belonging to the Holy See and of Vatican City itself were thrown open to offer refuge and safety to so many Jews of Rome being hunted by their persecutors.

No one is unaware that the fundamental difference from the very beginning has been the attachment of us Catholics to the person and teaching of Jesus of Nazareth, a son of your People…, from which were also born the Virgin Mary, the Apostles who were the “foundations and pillars of the Church” and the greater part of the first Christian community. But this attachment is located in the order of faith, that is to say in the free assent of the mind and heart guided by the Spirit, and it can never be the object of exterior pressure, in one sense or the other. This is the reason why we wish to deepen dialogue in loyalty and friendship, in respect for one another’s intimate convictions, taking as a fundamental basis the elements of the Revelation which we have in common, as a “great spiritual patrimony” (cf. Nostra Aetate No. 4).

We are all aware that, among the riches of this paragraph No. 4 of Nostra Aetate, three points are especially relevant. I would like to underline them here, before you, in this truly unique circumstance.

The first is that the Church of Christ discovers her “bond” with Judaism by “searching into her own mystery”, (cf. Nostra Aetate, ibid.). The Jewish religion is not “extrinsic” to us, but in a certain way is “intrinsic” to our own religion. With Judaism therefore we have a relationship which we do not have with any other religion. You are our dearly beloved brothers and, in a certain way, it could be said that you are our elder brothers.

The second point noted by the Council is that no ancestral or collective blame can be imputed to the Jews as a people for “what happened in Christ’s passion” (cf. Nostra Aetate, ibid.). Not indiscriminately to the Jews of that time, nor to those who came afterwards, not to those of today. So any alleged theological justification for discriminatory measures or, worse still, for acts of persecution is unfounded. The Lord will judge each one “according to his own works”, Jews and Christians alike (cf. Rom 2,6).

The third point that I would like to emphasise in the Council’s Declaration is a consequence of the second. Notwithstanding the Church’s awareness of her own identity, it is not lawful to say that the Jews are “repudiated or cursed”, as if this were taught or could be deduced from the Sacred Scriptures of the Old or the New Testament (cf. Nostra Aetate, ibid). Indeed, the Council has already said in this same text of Nostra Aetate, and also in the Dogmatic Constitution Lumen Gentium (No. 16), referring to Saint Paul in the Letter to the Romans (11,28-29), that the Jews are beloved of God, who has called them with an irrevocable calling.

Prayer: Thank you Lord for the increasing awareness of the interdependence of the Church and Israel today. Help us as Messianic Jews to truly play our part in both, as witnesses to the Jewishness of Yeshua, your owngoing purposes for your people Israel, and the special unity of the Body of Messiah, the Church, that you call Israel and all nations to participate in. In Yeshua’s name we pray. Amen.