Rosenberg, Rev. L., wrote the following brief sketch of himself shortly before he died:—”My parents were by birth Austrian Jews. By occupation my father was a landed proprietor and my mother carried on a drapery business. There were four children of the marriage, three boys and one girl. I was born on April 5th, 1828. My mother and three children died at a time when I was too young to remember them. My father was baptized into the Christian Church. I received a good [430] secular and religious education, enough to lead me to avoid bad company; not so much to honour God as to honour myself in order to be respected and esteemed so as to mix with the best society. [Bernstein reports, without telling us what the “L.” stands for!]

“Ignorant of and prejudiced against Christianity, how wonderful were the dealings of the Lord with me will be seen from the following record:—About 1841 I visited Constantinople. Here a young Jewish friend persuaded me, after much effort, to go with him to a Mission House, where we heard a godly sermon preached before a gathering of young Israelites, by the Rev. Dr. Schwartz, who, later on, was Pastor of Trinity Chapel, Edgware Road, West London, and also a member of the Committee of the British Society for the Propagation of the Gospel among the Jews. His Scriptural discourse awakened in me a desire to know more about Christianity, and I often went to hear him preach at the Chapel of the Prussian Embassy on the fore-noons [the early part of the day ending with noon] of the Lord’s Day.

“Having for a few years been convinced of the truth of Christianity, I studied the Old and New Testament together, praying morning and evening for light.

“About 1844 I again visited Constantinople on my way to Asia Minor for hunting, with a view to becoming a naturalist by profession, collecting wild animals, birds, and insects of all sorts for the museum. It was whilst hunting on the top of Mount Olympus that the glorious scenery and the power of God’s Word, created as it were, a voice within me, ordering me to leave all things, and I returned to Constantinople, and was [431] baptized by Mr. Allen, son-in-law of Dr. Duncan, the well-known ‘rabbi Duncan’ of Edinburgh.

“Again I returned to Broussa, and on my own account I preached the Gospel for a whole year to Jews, Armenians, and Greeks, from among whom many, through Divine grace, were converted.

“Thus encouraged I went to Malta, where for about six years I studied literature and theology in the Protestant College there, and in return I gave lessons to boys in different classes, four hours a day. To complete my preparations for the ministry of the Church I studied both in London and Edinburgh.

“The Jewish Committee of the Established Church of Scotland engaged me for about seven years, during which time I laboured as one of their missionaries at the stations of Salonica and Smyrna, with encouraging results, through the Divine blessing resting upon the Jews, Armenians and Greeks. After this, on my resignation, I returned to Edinburgh and London. 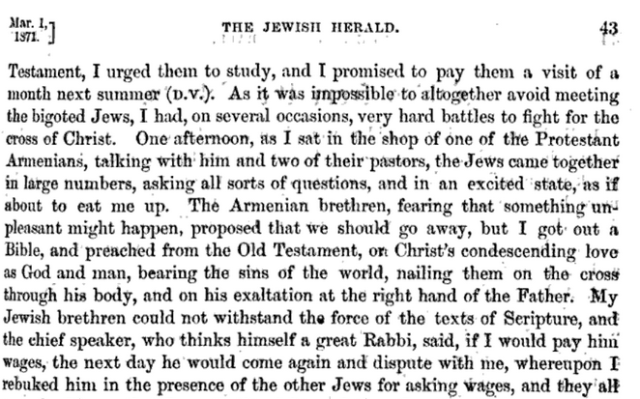 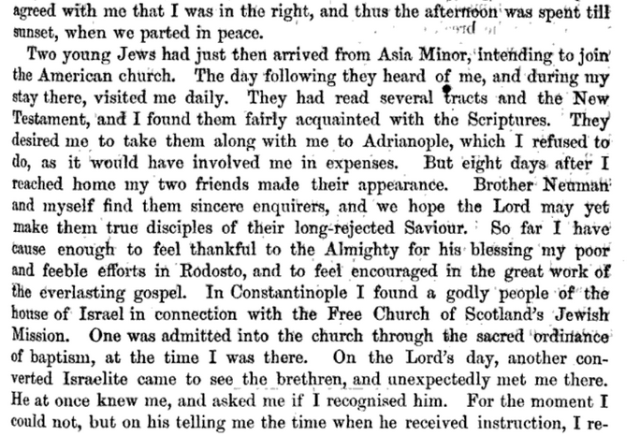 “Whilst in London the Committee of the Malta Protestant College, to whom I was well known, and amongst whom were the late Lords Shaftesbury, Calthorpe and Kinnaird, engaged me, and I went to the East to establish British Schools for boys in all the principal towns bordering on the Mediterranean and Black Seas. I established in Cairo a large boarding and day school, and for over two years I worked on until my health completely broke down, and, acting upon medical advice, I resigned and came to London. 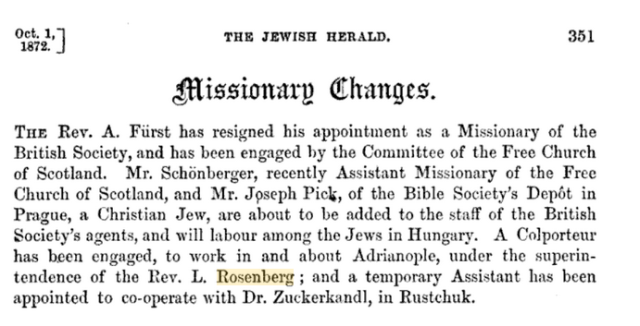 “On August 21st, 1865, I was engaged by the Committee of the British Society, and ever since then I [432] have been labouring, in Adrianople, chiefly among the Jews, but also among the Armenians and the Greeks. During the first ten years I baptized forty Jews, whilst other enquirers of mine have been baptized in Constantinople, Smyrna, Jerusalem and London. Many unbaptized Jews, Armenians and Greeks, have also been led to believe in Jesus as the Saviour of their souls.” He died in 1905 after more than forty years missionary work in Adrianople [ Edirne, Turkey]

Prayer: Thank you Lord for faith and 40 years of service of Rev. L. Rosenberg. May we too have diligence and faithfulness in your service. In Yeshua’s name, Amen.

Then the two mission families went to Smyrna, which, at that time, was an unoccupied station. Mr. Rosenberg was taken into the service of the Board, and a school was opened.

Mr. Morgan subsequently returned to Salonica, and took Rosenberg with him, though Mr. Parsons would gladly have kept him for his school for Jewish boys. This was in 1854, if I remember right, early in the year. At both of these stations things seemed to grow bright-

The only city in Turkey proper in which the British Society has been permanently represented is ADRIANOPLE. Here Rev. L. Rosenberg began his labors in 1865, and still continues to hold forth the Word of Life. Dr. Zuckerkandhl, of the Free Church of Scotland, a convert of the Budapest Mission, spent some years in association with Rosenberg in the early days in Adrianople. About the same time G. Neuman conducted a school in PHILIPPOPOLIS.

Edirne (Turkish pronunciation: [eˈdiɾne], Bulgarian: Одрин), is a city in the Turkish region of East Thrace, close to its borders with Greece and Bulgaria. Edirne served as the third capital city of the Ottoman Empire from 1363 to 1453,[3] before Constantinople (present-day Istanbul) became the empire’s fourth and final capital. At present, Edirne is the capital of Edirne Province in Turkish Thrace. The city’s estimated population in 2010 was 138,793, up from 119,298 in 2000.

As I’ve noted, Kazem Beg reported in 1865 that a platoon from the regiment was the firing squad for the first attempt to execute the Bab. Where was it first reported that it was the entire regiment, of 750 men? In The Babi and Baha’i Religions, Moojan Momen records a letter from Reverend L. Rosenberg, a British Missionary in Adrianople, to the Evanglical Alliance in London, bringing the persecution of Baha’u’llah and the Bahais to their attention. No date is given for the letter itself: Momen quotes a copy of the letter that Rosenberg sent to the British Consul in Adrianople, John Blunt, on August 13, 1868. The letter begins with an account of Rosenberg’s meeting with Baha’u’llah, and a confused account of the origins of the new religion. In the course of this he says,

Having received the word of God [i.e., the Bible] as the rule of faith and practice, and as test of all other religious books and religions as far back as 25 years, Mirza Hussein Ali Ishan [Baha’u’llah] and Mohammed Ali [Ali Muhammad, the Baba] began to preach in Iran before the Shah of Persia to all the moslems, and during seven years they bore the ‘cross of the gospel’ under heavy persecutions till at last Mohammed Ali was apprehended, tied to a tree and 750 soldiers discharged their guns at him; thus he fell a martyr to the truth by the order of the Persian Government.

This must reflect what Rosenberg was being told by Bahais in Edirne (Adrianople), in 1868: he does not indicate having any other source, and the oddities in his account (Baha’u’llah and the Bab preaching together, Baha’u’llah called Ishan) do not match any written source I know of.

The evidence suggests, so far, that this detail in the story originated not in Tabriz, or Iran, but in Edirne, in 1868 or earlier. Please feel free to use the comments section to add any earlier sources, or credible sources from Tabriz, that I have missed.

Messianic Jewish teacher in UK
View all posts by richardsh →
This entry was posted in otdimjh and tagged article, cmj, otdimjh, rosenberg, turkey. Bookmark the permalink.