From the ICEJ website: The Wannsee Conference was held on January 20, 1942 at a lakeside villa outside Berlin and was attended by 15 high-ranking Nazi bureaucrats who set in motion the implementation of a plan to eradicate the Jews of Europe. The meeting was convened by Reinhard Heydrich, assistant to deputy Nazi leader Heinrich Himmler, who led a discussion on methods to be used for the systematic, industrial murder of all Jews within Germany’s reach. A chart compiled by Adolf Eichmann for the Wannsee Conference listed all of the estimated 11 million Jews of Europe and northwest Africa as potential targets. 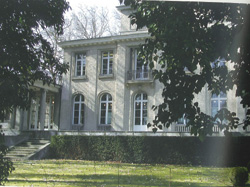 In the course of the meeting, Heydrich presented a plan, presumably approved by Adolf Hitler, for the deportation of the Jewish populations of Europe and French North Africa (Morocco, Algeria, and Tunisia) to German-occupied areas in eastern Europe, and the use of the Jews fit for labor on road-building projects, in the course of which they were expected to eventually die. According to the recorded minutes of the Wannsee Conference, any surviving remnant would be annihilated after completion of the road projects. This initial plan was soon altered as subsequent events unfolded during the war. When Soviet and Allied forces began pushing back the German lines, Nazi leaders decided to accelerate the extermination process and most of the Jews of German-occupied Europe were sent to death camps or concentration camps, or killed where they lived. Nonetheless, the Wannsee Conference stands as the clearest single evidentiary proof on which the entire Nazi leadership can be indicted for a collective genocidal plot to eradicate all of European Jewry.

In the months leading up to Wannsee, German forces invading the Soviet Union had made rapid advances to the gates of Moscow and a euphoric Nazi leadership began to discuss how to deal with the four million Jews of Eastern Europe which had fallen under German control. Shedding any moral restraints, Hitler and his chief lieutenants, Herman Göring and Heinrich Himmler, deliberated over the most practical “solution” to the “Jewish question.” Although no written order by Hitler to exterminate all Jews has ever been found, certain comments he made around this time made it clear he wanted to rid them from his realm. Based on this understanding, Göring gave written authorization to Reinhard Heydrich, chief of the Reich Main Security Office (RSHA), to “make all necessary preparations” for a “total solution of the Jewish question.”

From the Record of the Meeting:

Approximately 11 million Jews will be involved in the final solution of the European Jewish question, distributed as follows among the individual countries:

The number of Jews given here for foreign countries includes, however, only those Jews who still adhere to the Jewish faith, since some countries still do not have a definition of the term “Jew” according to racial principles.
The handling of the problem in the individual countries will meet with difficulties due to the attitude and outlook of the people there, especially in Hungary and Rumania. Thus, for example, even today the Jew can buy documents in Rumania that will officially prove his foreign citizenship.

Prayer: In the face of such evil, how is it possible to pray as Yeshua did: “Father, forgive them, they knew not what they did?” It seems only possible to mourn the loss of 6 million, crying out to God for justice. What Hannah Arendt would call ‘the banality of evil’ was planned on such a monstrous scale that we can only recoil in horror, and cry out for God’s mercy, justice, healing, reconciliation and forgiveness. Amen, Lord have mercy.

Buchenwald liberated by US Army (10 April)

Messianic Jewish teacher in UK
View all posts by richardsh →
This entry was posted in otdimjh and tagged article, otdimjh, shoah, wansee. Bookmark the permalink.