Next year we celebrate the 150th anniversary of the founding of the Hebrew Christian Alliance of Great Britain, now known as the British Messianic Jewish Alliance (BMJA). Today we celebrate one of its founders, a great preacher, man of letters and Jewish believer in Yeshua.

Schwartz, Rev. Dr. Karl (Solomon), was born at Meseritz in Posen in 1817. His father, Isaac Schwartz was a merchant, and gave him a strict rabbinic education, cherishing the hope that he would one day become a teacher in Israel. [from Bernstein: Some Jewish Witnesses] 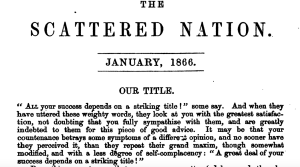 To this end he was sent to Berlin in 1832 to study at the rabbinic Seminary there. In the lectures the professors occasionally compared Judaism with Christianity, to the disadvantage, of course, of the latter. This excited in Schwartz a desire to examine Christianity for himself, so he took the first step by exchanging the Seminary for the Gymnasium. During the course of[468] his studies he was instructed in Christianity and baptized October 18, 1837. He then studied theology for a year at Halle, under Tholuck, and then under Neander, Hengstenberg, and Twesten, for four years at Berlin.

At that time he used to give lessons in foreign languages to the inmates of the Berlin House for foreign missions, when his landlady said to him once, “It is all very nice for you to teach these young men foreign languages in order that they may be qualified to preach the Gospel to the heathen. Have you at all thought of your own brethren who live in your own neighbourhood without the light of the Gospel?” This was a word in season. Thereupon he entered into correspondence with the L.J.S., joined the Church of England, and was ordained deacon by the Bishop of London on March 20, 1842, and was sent by the Society to Constantinople. On his way there he sojourned for awhile at Pesth, where his lectures on Isaiah liii. bore good fruit, and it seems that he then got engaged to Maria Dorothea, a daughter of Israel Saphir.

He did not remain very long in Constantinople, because his connexion with the Scotch Mission at Pesth caused him to join the Free Church of Scotland, and he was sent by that Church to Berlin, where he was stationed from 1844 to 1849, and he went then to Prague, but settled in the same year at Amsterdam. There he found that the Dutch Jews were not so accessible as the Jews in Hungary, Turkey, and Germany, so he adopted the method of preaching special sermons in churches and inviting the Jews through advertisements [469] to attend them. In 1850 he issued a Dutch paper, giving expositions of Messianic prophecy and the like, for circulation among the Jews. This he edited for several years.

In 1856 a mission church was built for him, and his first sermon then was on Zech. iv. 6. In that church he baptized quite a number of Jews. On Sunday, August 1, 1858, Schwartz ascended the pulpit to preach to a congregation of 1,200, on St. John xii. 26, and while bowing down to offer up prayer, a young Jew quietly crept up the steps and stabbed him with a dagger in the left shoulder so that he was saturated with blood, and had to be carried home in a fainting condition. The attempted assassin was put into prison, where Schwartz, after his recovery, visited him but did not succeed in bringing him to a better mind. However, a near relation of his became a Christian after that event; and a Jewess, too, was thereby induced to come to Schwartz for instruction and baptism.

After fifteen years’ arduous labours in Holland, Schwartz accepted a call in 1864 from the congregation of Trinity Chapel, Newnham Street, London, to succeed Ridley Herschell. In London he founded a home for enquirers; and edited a periodical entitled, “The Scattered Nation.” In 1866 he founded “The Hebrew Christian Alliance,” and delivered lectures, besides preaching twice every Sunday. In this good work he continued till August 24, 1870, when he died on his knees at the age of fifty-three, and was buried near his friend, Ridley Herschell.

One of his sons, Jozua Marius Willem van der Poorten Schwartz, was a celebrated novelist in Holland, writing under the name of Maarten Maartens

Prayer: Thank you Lord for this redoubtable Jewish believer in Yeshua, and what he accomplished. As the BMJA celebrates its 150th anniversary next year, may it continue to unite Jewish believers in the bond of sympathy, fellowship and prayer, so that Israel and all nations may see lived out amongst them the mystery of the ‘remnant saved by grace’. In Yeshua’s name we pray. Amen. 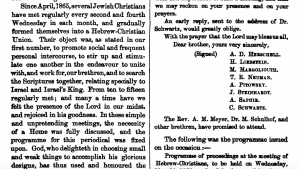 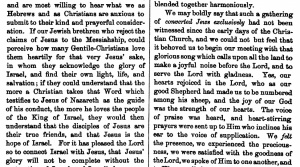 In 1866 the celebrated Dr. Carl Schwartz founded the Hebrew-Christian Alliance for the purpose of testifying to the Jews that Hebrew-Christians consider themselves still Jews, of reminding the Church of the promises to the Jews which are yet to be fulfilled, of assisting and upbuilding each other in brotherly helpfulness, and finally of undertaking direct gospel work among the Jews. The name of- the .founder of this alliance was so well known that Hebrew-Christians everywhere became interested, and the alliance soon had eightv members. Its meetings were held every two weeks and were well attended. The Scattered Nation and Jewish Christian Magazine, published monthly by Schwartz, was the excellent organ of the alliance and stirred not only the hearts of the Hebrew-Christians, but also the interest of Gentile Christians and even of unbelieving Jews. Evangelistic addresses were regularly given by members of the alliance in different parts of London, and the administration of the Hebrew-Christian model *farm in Palestine was undertaken by the alliance. Branches were founded in different parts of Europe, and the annual meetings and reports regularly increased the enthusiasm, although the great majority of Hebrew-Christians were opposed to the “judaizing” tendency of Schwartz and his alliance.

The sudden death if Schwartz, September, 1870, caused the immediate suspension of this Hebrew-Christian Alliance, and it was clearly proved that it was held together not so much by real interest in the cause, as by the magnetic influence of a great man !