It is with gratitude and praise that we remember today the life and ministry of Eric Lipson, who was a mentor to me as a young Jewish believer in Yeshua. His rabbinic background, his powerful experience of faith, his scholarship, wit and humour, were infectious. He was ably assisted by his wife Irene, who preached at our wedding, and his children continue his legacy today. Here is the tribute I wrote at the time of his death. I had the honour to speak at his funeral, and today tears of both sadness and gratitude fill my eyes as I remember him, and pray for his family to know God’s love and peace.

Eric was a scholar and a gentleman, with strong Jewish upbringing, yichus (family) and yiddishkeit (Jewishness). He was also a remarkable Christian speaker, teaching a wealth of material transformed by his faith and reflection as a believer in Yeshua. His Passover Haggadah was published by Jews for Jesus, and other booklets, pamphlets and articles published in magazines and journals. “May the memory of the righteous be a blessing”

As we celebrate the conclusion of Eric Lipson’s life on this earth, it is appropriate that we do so rejoicing in the deliverance that he experienced and recognizing the redemption that he experienced through his Passover Lamb, the Messiah Jesus. It was his and his wife Irene’s wish that this service should truly be a celebration and thanksgiving for his life.

Eric died peacefully at home at the remarkable age of 90. In Jewish tradition his death was like that of Moses and Aaron who also died in old age. It was the embrace of God.” He was a remarkable man, born with distinguished connections in the Anglo-Jewish world. On becoming a Christian, he had a far-reaching and influential ministry to many. He was, in the words he used to describe his friend and mentor Jacob Jocz, a “living synthesis of Jew and Christian.” 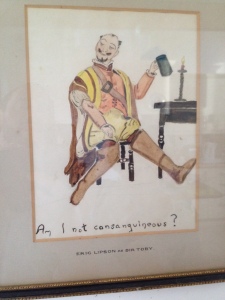 Eric’s Hebrew name was Simcha ben Shlomo, which means “Joy son of Solomon.” His father was a minister in the Synagogue at Kentish Town. The family moved to Hammersmith when Eric was four. Around the interior of the Synagogue were carved in Hebrew words that later became very precious to Eric: “In every place where I record My name I will come to you, and I will bless you” (Exodus 20:24).

Eric’s father became the Senior Jewish Chaplain in the Armed forces during the First World War and was a friend of the Chief Rabbi, Joseph Hertz. Eric’s maternal grandfather, Rabbi Shandel, was minister of the Synagogue in Ramsgate. Eric was thoroughly steeped in his Jewish heritage in a way that few of us in this generation can claim.

With such forebears one might have expected Eric to choose rabbinic ministry or a life of public service, which is how he began. He studied at the main training ground for Rabbis, Jews College, but did not find spiritual fulfillment there. He studied natural sciences and Oriental language for a while at Jesus College, Cambridge but returned to Jews College. He became minister of Highgate Synagogue and worked with a Jewish charity settlement in the East End of London. But by the outbreak of the Second World War his faith had begun, as he described it, “to deaden.” He left the rabbinic ministry to join the Ministry of Labour.

This took him to Sheffield, where he served as District Welfare Officer and leader of the Synagogue in Sheffield. He served the Jewish community, trying to unite two congregations that had become divided, but at some personal cost. Eric experienced what he called “the spiritual malaise of years” as he saw himself as more of a humanist and an agnostic than a man of faith. He felt overcome by trouble and sorrow.

Through the prayers of a friend at work, and through meeting Jacob Jocz while visiting St. John’s Downshire Hill, Eric found salvation. He came to accept Jesus as his Savior and Lord; his old self was washed away and a new Eric was born.

He made a full commitment as a Christian and was baptized. He gave his life as a Jew who believed in Jesus, helping Christians to understand Jews and Judaism and helping Jews and Gentiles to find the Messiah. He (and Irene) served with CMJ (the Church’s Ministry Amongst the Jews). In the 1960s he became president of the then Hebrew Christian Alliance of Great Britain and of the International Hebrew Christian Alliance.

Many of us younger Jewish believers in Jesus came to Eric and Irene for advice, wisdom, counsel and comfort. He was a role model, a patriarch almost—and not only because of his scholarship, his love for the Lord, his insight, his ability to bring a calming approach to problems. It was his genuineness. Bishop George Appleton of Jerusalem, an old friend, paid Eric Lipson the compliment he so appreciated, that he was “fully integrated as a Jew and as a Christian.” Eric’s Passover Haggadah* is an example of what that fully integrated Jewish and Christian personality could produce.

Eric could have retired at 70 but had the youth and enthusiasm to make you doubt that he was old enough to retire. He was always a joy to be with, and his personal friendships with many around the world testify to the way God used him to bless and minister to many.

Eric would not want the focus of this time to rest on him, but on his Messiah and Lord, Y’shua. It was Jesus who brought him so much comfort as Eric knew he had been forgiven of his sins. Jesus brought Eric, whose Hebrew name was “Joy,” joy more abundantly. Eric was always learning more of God, of Jesus, and would want us to do likewise. To Eric, Jesus was the true Torah: the Torah in human form, Torah incarnate. He would always be writing down new ideas, inspirations, letters to the Times or Jewish Chronicle, showing how in Jesus all the answers were to be found. As we give thanks for Eric’s life, we who know the Messiah and believe His promises look forward to a joyful reunion one day in heaven.

Messianic Jewish teacher in UK
View all posts by richardsh →
This entry was posted in otdimjh and tagged article, cmj, haggadah, lipson, otdimjh. Bookmark the permalink.