“Few men have had a more striking career than the Rev. Michael Rosenthal.”

“He was a most impressive preacher, the passionate eloquence of his race being rendered all the more forcible by the intense earnestness of his own convictions. He spoke from his heart, and his influence was felt alike by the poorest catechumens he instructed and the listeners at a West-End drawing-room meeting.” (Some Great Christian Jews)

Rosenthal, Rev. Michael, Vicar of St. Mark’s, Whitechapel, who died at the age of 63, was a converted Jewish rabbi, who for thirty years carried on an earnest missionary work among the Jews of East London. [Bernstein, Some Jewish Witnesses]

The story of his conversion is a remarkable one. Young rabbi Rosenthal, a Hebrew of German extraction, was a profound Talmudist, and as strict and zealous a Jew as was Saul of Tarsus before the journey to Damascus. Rosenthal was sent on missions in connexion with the faith of his fathers to Asia Minor, to North Africa and other countries, and finally to England. On a steamboat he met a very learned and able man, who he believed was a Jesuit. The man was certainly a Roman Catholic, and he possessed a good deal of [435]  rabbinical lore.

Rosenthal, as a strict Jew, observed all the dietary and other laws of his people, and took his meals separately. The supposed Jesuit ridiculed his scruples, and one day, when the young rabbi was dining alone, touched his bottle of claret, thereby, of course, rendering it defiled. Rosenthal was angry, and the man saw this and taxed him with over-niceness in ceremonial observance. “Do you really think,” he asked, “that God is pleased by your rejecting things that are good enough for the captain and other people on the ship, and that you really serve Him by making yourself so different from anybody else?” They had some conversation, which left a great impression on the young rabbi’s mind.

One argument used by the supposed priest had considerable effect. The Jews in the course of their history during the last nineteen hundred years have acknowledged no fewer than twenty-four Messiahs, all of whom have turned out to be false, either impostors or self-deluded fanatics. Can a nation that has made the gigantic mistake of accepting twenty-four false Messiahs claim to be infallible in rejecting a twenty-fifth? All these false Messiahs have appeared and been accepted since our Lord lived on earth except “Judas of Galilee,” who was a contemporary of Jesus Christ.

Some time after his arrival in England Rosenthal became acquainted with Dr. Wilkinson, then rector of St. Peter’s, Eaton Square. The young rabbi was tremendously impressed by Dr. Wilkinson’s great abilities and spiritual earnestness. “Here is a Christian,” he said to himself, “who is [436] absolutely sincere and of great intellectual power. Can Christianity be merely a modern form of Paganism when such noble souls as these profess it?” He listened to Dr. Wilkinson, and was on the way to conversion when the good rector advised him to have recourse to the learned Dr. Ewald, a celebrated Jewish missionary of the L.J.S., for the solution of difficulties which only a Hebraist could deal with successfully.

Rosenthal was eventually baptized by Ewald. He took orders in the English Church, being ordained deacon by Dr. Jackson, Bishop of London, in 1877. Four years later he was admitted to the priesthood, and he served for thirteen years as curate to the Rev. S. J. Stone, author of “The Church’s One Foundation,” at St. Paul’s, Haggerston, devoting himself chiefly to mission work among the East-end Jews. 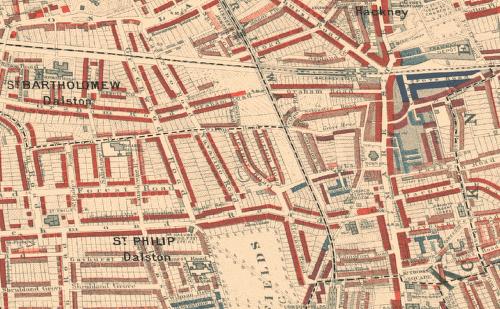 He organized the East London Mission to the Jews, which first came under regular diocesan management when the present Bishop of London was Bishop of Stepney. In 1899 Bishop Creighton presented Mr. Rosenthal to St. Mark’s, Whitechapel, a parish which is inhabited almost entirely by Jews. He met with a good deal of hostility from the Jews in the first years, but he talked straight to them and gradually the opposition died down, and he steadily pursued his mission work among them. His labours were attended with considerable success. He said that he had himself baptized over six hundred Jews and Jewesses.

“It was a strange sight to see the boys’ schoolroom filled with a frowsy crowd of unkempt Polish Jews, singing in Yiddish, Lord, I hear of showers of blessing: it was a still stranger sight to see an adult baptism, when the converts would be followed into church by a fierce-eyed, muttering crowd of their fellows, who would threaten acts of personal violence alike to priests and converts, threats which, happily, they seldom if ever managed to put into practice. Strangest and most moving of all it was to be present at a choral Hebrew Eucharist, when one seemed, as it were, to be hearing the Church of Jerusalem in the first days lifting up their voice with one accord in praise of the Crucified. This Jewish work…..made, as might be expected, a deep impression upon the parishioners.”

Prayer: Thank you Lord for the life, gifts and ministry of Michael Rosenthal, and the significant legacy which he left behind. May the Messianic movement today similarly show the fruit of such labours. In Yeshua’s name we pray. Amen.

Michael Rosenthal was Vicar from 1899-1907 (curiously, he only became a trustee of the parish’s National School in 1904 – incumbents are normally ex officio). He was given a dispensation to preach in Hebrew. In 1885 Charlotte M. Yonge, sometimes described as ‘the novelist of the Oxford movement’, wrote to her cousin Mary about a meeting with Rosenthal at which he explained Jewish customs to her. The Booth Archive contains an interview with him [B222 pages 108-125]. His memorial tablet (in dark marble), which was moved to St Paul Dock Street when St Mark’s closed, says formerly a Jewish rabbi, he was converted in early manhood to the Christian religion, and enduring much persecution thenceforth laboured unceasingly to bring to his Jewish brethren the knowledge of Jesus Christ. More on his later ministry here. (His son David became the vicar of St Agatha Sparkbrook, an inner-city anglo-catholic parish in Birmingham, until his sudden death in 1938. Descendants remain active in the Church in Wales, and we are grateful for information that they have provided.)

(7) Michael Rosenthal (Vicar of St Mark Whitechapel 1899-1907), a rabbi born in Lithuania, was converted to Christianity by a Jesuit while on a tour of Europe fundraising for Jewish charites. He trained at the college of the London Society for Promoting Christianity among the Jews (a parish-based charity established in 1877, where Dr Ewald was based) and worked from St Paul Haggerston for 14 years (the East London Tract Depot was set up there in 1887) as the hymnwriter Samuel John Stone’s curate, and later as curate of St Peter Eaton Square. Although St Paul Haggerston had few Jewish residents at the time, Stone had inherited a passion for this work from his father (whom he succeeded as incumbent in 1874). A memoir of Stone’s life comments, on Rosenthal’s work there,

Active for 30 years in Jewish-Christian mission, Rosenthal served at St Mark’s under the aegis of the East London Mission [later Fund] to the Jews, which he had founded, and was based at 87 Commercial Road (opposite the top of Christian Street, in the then-parish of St Augustine Settle Street) and at Navarino Road in Dalston (where he lived before he became Vicar of St Mark’s). (It is not to be confused with the East End Mission to the Jews, founded in 1890 by David Oppenheim and based in Leman Street.) The work of the mission included, according to its advertisements, A Home for Jewish Orphans, Hebrew Mission Services, Bible Classes for Inquiring Jews, Bible Classes for Lay Workers, Public Addresses to Unbelieving Jews, Meetings of the Hebrew Guild of Intercession, Mothers’ Meetings for Unbelieving Jewesses, Instruction Classes to Catechumens, Preparing Jews for Baptism, Confirmation and Holy Communion, Helping them on their onward heavenly march, and also assistance for destitute Jews. He claimed that over a period 20 years he had baptized over 600 Jewish converts. It supported curates, male and female layworkers and nurses, many of them themselves converts, and published annual reports of its work. It also organised the Hebrew Guild of Intercession (which claimed 1700-1800 members in the late 1890s), ran an orphanage from 1887, and published an edition of the Prayer Book communion service in Hebrew and English (here is a report of the Guild’s 25th anniversary service – after Rosenthal’s death – at which the Bishop of Stepney pronounced the absolution and blessing in Hebrew). Rosenthal died in 1909 at the age of 63 – see this obituary. He featured in John Stockton Littell Some Great Christian Jews (Keene 1913). On a flyleaf in the register of baptisms administered at these premises between 1892-98 (now in the London Metropolitan Archives), Rosenthal’s successor at St Mark’s, L.S. Lewis, noted that after that date all baptisms had been administered at the church, and that he had removed the register and a font from the premises. See here for statistics for St Mark’s registers.

His life is described in The Church Times for June 14, 1907:   “Few men have had a more striking career than the Rev. Michael Rosenthal. He was bom at Wilna in Russia, of distinguished Jewish parentage, a direct descendant, on his father’s side, of the famous Spanish statesman and patriot, Don Isaac Abarbanel. His mother belonged to an ancient Aaronic family. His father was a learned Rabbi, and he himself was educated for the Rabbinate. He passed the Rabbinical examinations with great distinction, and owing to his own natural gifts, as well as to family connections, was appointed, while still a very young man, to an important post in connection with the Israelitish Alliance. The young Rabbi trav-

There are thirty -seven thousand Jew^s in this district, and at a recent service the

tion in Hebrew, while the priest, choir and congregation, rendered their parts in^ithe

Eucharists, that the Guild has published the service in Hebrew-English, and it is

followed intelligently and easily learned by any of the friends and neighbors, who

often come to worship with them. It may be of interest to see how our Lord’s ser-

vice sounds in the opening of several parts in the ancient language of His own race:

Shelom haelohim The peace of God.

This work has been a success because it is a brave work, boldly attempted on

thoroughly Christian lines. It is the best existing model for Jewish work.

rest of us associated his religion with nature, color, mystery, movement, adoration,

and that these things, so far from being wrong in religion, are his right even if we

do not think of them as ours. Those who have chosen bare and cold forms for wor-

ship have come ere now more than half to regret their losses, and it is folly for us to

force on the Jew that which we regret that we must put up with ourselves. I say

Jews in the United States, and at least one prominent, promising society, which for

long carried the burdens of an uphill work, has disbanded. When we try again, we

must not forget the lessons of the career of Michael Rosenthal.

Messianic Jewish teacher in UK
View all posts by richardsh →
This entry was posted in otdimjh and tagged article, cmj, east london mission to jews, otdimjh, rosenthal. Bookmark the permalink.