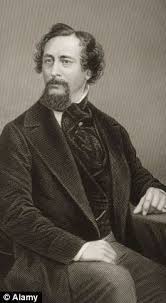 Charles Dickens (7 February 1812 – 9 June 1870) was considered an anti-Semite by some because of his character Fagin in Oliver Twist.  Dickens defended himself against what he considered a false claim. In a later work, Our Mutual Friend, Dickens created the sympathetic Jewish character Mr. Riah who is the victim of a Christian moneylender. “The Jewish people are a people for whom I have a real regard and to whom I would not willingly have given an offense…for any worldly consideration.” [Wikipedia article]

Dickens’ portrait of Fagin in one of his most widely read early novels Oliver Twist, has been seen by some as deeply antisemitic, though others such as Dickens’ biograper G.K. Chesterton [also considered by some to use anti-semitic motifs] have argued against this notion. The novel refers to Fagin 257 times in the first 38 chapters as “the Jew”, while the ethnicity or religion of the other characters is rarely mentioned.

Fagin waits to be hanged

The role of Fagin in Oliver Twist continues to be a challenge for actors who struggle with questions as to how to interpret the role in a post-Nazi era. Various Jewish writers, directors, and actors have searched for ways to “salvage” Fagin. 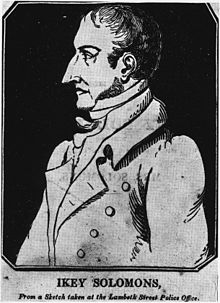 Late in life, Dickens developed close friendships with Jews and unambiguously retracted his earlier antisemitic views and created a sympathetic Jewish character “Riah” (meaning “friend” in Hebrew) in his novel Our Mutual Friend, whose goodness, is almost as complete as Fagin’s evil. Riah says in the novel: “Men say, ‘This is a bad Greek, but there are good Greeks. This is a bad Turk, but there are good Turks.’ Not so with the Jews … they take the worst of us as samples of the best …”.

Paul Vallely writes in The Independent that Dickens’s Fagin in Oliver Twist —the Jew who runs a school in London for child pickpockets—is widely seen as one of the most grotesque Jews in English literature.[21] The character is thought to have been partly based on Ikey Solomon, a 19th-century Jewish criminal in London, who was interviewed by Dickens during the latter’s time as a journalist.[22] Nadia Valdman, who writes about the portrayal of Jews in literature, argues that Fagin’s representation was drawn from the image of the Jew as inherently evil, that the imagery associated him with the Devil, and with beasts.[23]

The novel refers to Fagin frequently as simply “the Jew”, while the ethnicity or religion of the other characters is rarely mentioned.[21] In 1854, the Jewish Chronicle asked why “Jews alone should be excluded from the ‘sympathizing heart’ of this great author and powerful friend of the oppressed.” Eliza Davis, whose husband had purchased Dickens’s home in 1860 when he had put it up for sale, wrote to Dickens in protest at his portrayal of Fagin, arguing that he had “encouraged a vile prejudice against the despised Hebrew”, and that he had done a great wrong to the Jewish people.[24] Dickens had described her husband at the time of the sale as a “Jewish moneylender”, though also someone he came to know as an honest gentleman.

Dickens took her complaint seriously. He halted the printing of Oliver Twist, and changed the text for the parts of the book that had not been set, which is why Fagin is called “the Jew” 257 times in the first 38 chapters, but barely at all in the next 179 references to him. In his novel, Our Mutual Friend, he created the character of Riah (meaning “friend” in Hebrew), whose goodness, Vallely writes, is almost as complete as Fagin’s evil. Riah says in the novel: “Men say, ‘This is a bad Greek, but there are good Greeks. This is a bad Turk, but there are good Turks.’ Not so with the Jews … they take the worst of us as samples of the best …” Davis sent Dickens a copy of the Hebrew bible in gratitude.[21] Dickens not only toned down Fagin’s Jewishness in revised editions of Oliver Twist, but removed Jewish elements from his depiction of Fagin in his public readings from the novel, omitting nasal voice mannerisms and body language he had included in earlier readings.[25]

Joel Berkowitz reports that the earliest stage adaptations of Oliver Twist “followed by an almost unrelieved procession of Jewish stage distortions, and even helped to popularize a lisp for stage Jews that lasted until 1914”[26] It is widely believed that the most antisemitic adaptation of Oliver Twist is the David Lean film with Alec Guinness as Fagin. Guinness was made-up to look like the illustrations from the novel’s first edition. The film’s release in the US was much delayed due to Jewish protests, and was initially released with several of Fagin’s scenes cut. This particular adaptation of the novel was banned in Israel.[27] Ironically, the film was also banned in Egypt for portraying Fagin too sympathetically.[28] When George Lucas’ film Star Wars I: The Phantom Menace was released, he denied the claim made by some critics that the unscrupulous trader Watto (who has a hooked nose) was a Faginesque Jewish stereotype. However, animator Rob Coleman admitted that he viewed footage of Alec Guinness as Fagin in Oliver Twist to inspire his animators in creating Watto.[29]

In recent years, Jewish performers and writers have attempted to ‘reclaim’ Fagin as has been done with Shakespeare’s Shylock in Merchant of Venice. The composer of the 1960s musical Oliver, Lionel Bart, was Jewish, and he wrote songs for the character with a Jewish rhythm and Jewish orchestration.[27] In spite of the musical’s Jewish provenance, Jewish playwright Julia Pascal believes that performing the show today is still inappropriate, an example of a minority acting out on a stereotype to please a host society. Pascal says “U.S. Jews are not exposed to the constant low-level anti-Semitism that filters through British society”. In contrast to Pascal, Yiddish expert David Schneider found the Dickens novel, wherein Fagin is simply “the Jew,” a difficult read, but saw Fagin in the musical as “a complex character” who was not “the baddie.”[27] Jewish stage producer Menachem Golan also created a less well-known Hebrew musical of Oliver Twist.[30]

Some recent actors who have portrayed Fagin have tried to downplay Fagin’s Jewishness, but actor Timothy Spall both emphasised it while making Fagin sympathetic. For Spall, Fagin is the first adult character in the story with actual warmth. He is a criminal, but is at least looking out for children more than the managers of Twist’s workhouse. Spall says “The fact is, even if you were to turn Fagin into a Nazi portrayal of a Jew, there is something inherently sympathetic in Dickens’s writing. I defy anyone to come away with anything other than warmth and pity for him.”[31] Jewish actors who have portrayed Fagin on stage include Richard Kline,[32] Ron Moody in the Oscar-winning film of the musical Oliver, and Richard Dreyfuss in a Disney live action TV production.

Cover of Will Eisner’s graphic novel Fagin the Jew. Eisner tries to make Fagin complex and frames the story as an interview between Fagin and Dickens in which Fagin pleads for greater sympathy

Will Eisner’s 2003 graphic novel Fagin the Jew retells the story of Oliver Twist from Fagin’s perspective, both humanising Fagin and making him authentically Jewish.[33]

Jewish filmmaker (and Holocaust survivor) Roman Polanski did a film adaptation of Oliver Twist in 2004. Concerning the portrait of Fagin in his film, Polanski said

“It’s still a Jewish stereotype but without going overboard. He is not a Hassidic Jew. But his accent and looks are Jewish of the period. Ben said a very interesting thing. He said that with all his amoral approach to life, Fagin still provides a living for these kids. Of course, you can’t condone pickpocketing. But what else could they do?”[34]

In the same interview, Polanski reluctantly notes that there are elements of Oliver Twist which echo his own childhood as an orphan in Nazi-occupied Poland. In reviewing the film, Norman Lebrecht argues that many previous adaptations of Twist have merely avoided the problem, but that Polanski found a solution “several degrees more original and convincing than previous fudges” noting both that “Rachel Portman’s attractive score studiously underplays the accompaniment of Jewish music to Jewish misery” and that “Ben Kingsley endows the villain with tragic inevitability: a lonely old man, scrabbling for trinkets of security and a little human warmth”, concluding that “It was certainly Dickens’ final intention that ‘the Jew’ should be incidental in Oliver Twist and in his film Polanski has given the story a personal dimension that renders it irreproachably universal.”[25]