Raymundus Martini[2] was an innovative missionary preacher and Dominican monk who spent his life engaged in debate and apologetics with Jews and Moslems in 13th century Spain. 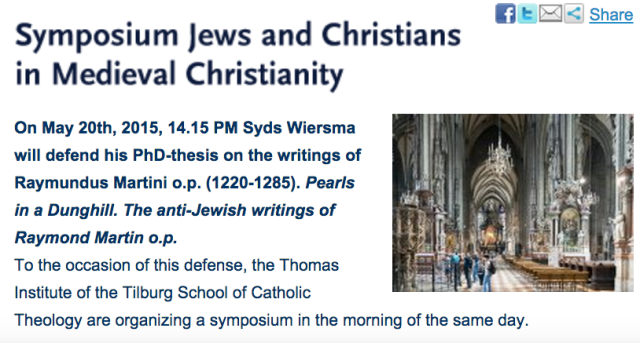 His major work, the Pugio Fidei (“Dagger of Faith”) has been the major source, both acknowledged or plagiarised, of apologetic material for Jewish evangelism, up to the present day.[3] Martini developed in detail and systematised a new methodology in Jewish-Christian encounter that had been introduced by Paulus Christiani in his 1963 debate with Nachmanides.[4] Arthur Lukyn Williams, author of Christian Evidences for the Jewish People, a major 20th century work of apologetics, wrote: “It is to be much wished that an abbreviated edition of the PF were published, incorporating the Jewish quotations, with some of Voisin’s notes, and adding notes and explanations more suitable to our own day. It would form a valuable introduction to the study of Jewish literature.”[5]

Martini’s life and works identify him as one of the most impressive students of Judaism and Islam of his or any period in history.[6] His longevity and possible Jewish ancestry make him a fascinating figure for historical research. The negative assessment of his strategy by his rival the great mystic and philosopher Ramon Lull, and the charge of falsifying midrashim made against him by modern scholars, show that he was not only involved in controversy, but was c controversial figure himself. His major works show development in his philosophical method, influenced as he was by the writings of his teacher Thomas Aquinas in his engagement with Aristotelian thought. They demonstrate his growing understanding of Judaism, of both the Rabbinic midrashic tradition and the emerging Kabbalah. His relecture of this material in the aid of evangelistic proclamation challenges the political correctness and hermeneutical conventions of today. We will examine the effectiveness of his arguments, and see whether they spoke more to his captive audiences or to assuage the doubts of his own constituency.

Martini’s approach also forced Jewish respondents to find new defences for their faith. The sharpening of the distinctives of Christianity and Judaism that emerged as a result of such detailed study of one tradition by another were to pave the way for critiques of the Christian tradition itself that fuelled the Renaissance and Reformation in Christian Europe. The philosophical issues involved in the Jewish-Christian debate whose agenda had been set and summarised by Martini were to pull the greatest minds in each tradition into the harness of polemic and propaganda.

Today sees the defense of a doctoral dissertation by Syds Wiersma, a young Dutch scholar, and a day conference devoted to medieval apologetics. As far as I am aware, this is the first PhD to focus on this major work.

Prayer: You know, O Lord, the methods and motives of medieval apologists, and the context and climate of anti-Judaism in which they lived. Father, forgive their theological prejudice against Jews and Judaism. Help us to show your reconcling love, mercy and forgiveness to all, we pray. In Yeshua’s name. Amen.

[1] This post is a revised and abbreviated version of Richard Harvey, “Raymundus Martini and the Pugio Fidei: A Survey of the Life and Works of a Medieval Controversialist” (MA Diss. London: University College London, 1991, http://www.lulu.com/product/paperback/raymundus-martini-and-the-pugio-fidei/1838270 ).

[2] Referred to throughout as Martini. Also known as Rámon, Raimundus, Raymond; Martin, Martinus, Martí, Martinez. Schiller-Szinessy’s conjectures that that “the name ‘Martini’ arose no doubt from the wrongly applied Latin genitive” is without any basis (Schiller-Szinessy, S.M., “The Pugio Fidei”, Cambridge Journal of Philology 16 (1888) pp. 131-152, 134). If he was the son of a better-known “Martin”, this may point to possible Jewish origin. See below.

[4] For an account of the debate and the development of the new argumentation see Robert Chazan, Daggers of Faith (USA: University of California Press, 1989) and Robet Chazan, “From Friar Paul to Friar Raymond: The Development of Innovative Missionising Argumentation”, Harvard Theological Review 76:3 (1983), pp. 289-306.