Richard Zimler talks about his novel
“The Last Kabbalist of Lisbon”

A German woodcut depicting the massacre, one of the few woodcuts that survived the 1755 Lisbon earthquake and the fire at Torre do Tombo

The Lisbon Massacre, alternatively known as the Lisbon Pogrom or the 1506 Easter Slaughter was an incident in April, 1506, in which a crowd of Catholics, as well as foreign sailors who were anchored in the Tagus, persecuted, tortured, killed, and burnt at the stake hundreds of people who were accused of being Jews and, thus, guilty of deicide and heresy. This incident took place thirty years before the establishment of the Inquisition in Portugal and nine years after the Jews were forced to convert to Roman Catholicism in 1497, during the reign of King Manuel I. Because the victims were Marranos or Conversos (Jews who had become Catholics), it was somewhat unique among incidents of anti-Semitic violence. It is also known as the Easter Massacre. It is estimated to have resulted in the violent deaths of anywhere between 1,000 to 4,000 men, women and children. 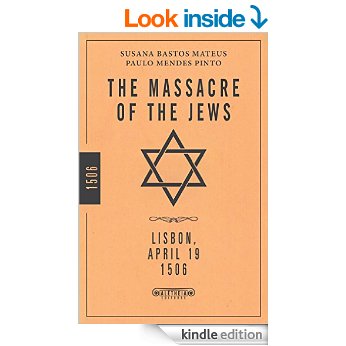 Following the expulsion from Spain, in 1492, by the Catholic kings, about 93,000 Jews took refuge in Portugal. The king of Portugal, D. Manuel I, seemed to be more tolerant towards the Jewish community, but, under the pressure of Spain, as from 1497, in Portugal, Jews were forced to convert, to avoid being humiliated and killed in the public squares.

The massacre began at Convent of Saint Dominic, on Sunday, April 19, 1506, when the believers were praying for the end of the drought and plague that ravaged Portugal, and someone claimed to have seen the face of Christ lit at the church altar – a phenomenon that was interpreted as a miracle by the Catholics present.

A New Christian who also attended the mass tried to explain that this miracle was only the reflection of a light, but the crowd would not listen to him and beat him to death. As from there onwards, the Jews who were already viewed with suspicion became the scapegoat of drought, hunger and plague.

The massacre lasted three days, during which the crowd, including sailors from Holland, Zealand, Germany and other places, was encouraged by the Dominican priests who promised absolution of sins for those who would kill the “heretics”. The royal court was in Abrantes – to escape the plague. When the massacre began, D. Manuel I was on his way to Beja, to visit his mother . Having been informed of the events, he ordered the magistrates to try to put an end to the bloodshed. 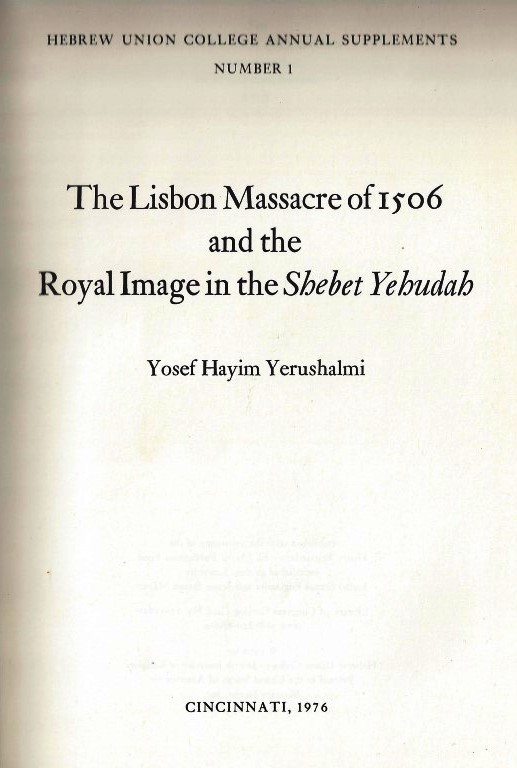 In Lisbon, the few officials present were forced to flee. As a consequence, men, women and children were tortured, massacred and burned in Rossio, more exactly in Santo Domingo’s square and also along the Tagus river. The Jews were accused of deicide and to be the cause of the deep drought and plague that ravaged the country. The killing took place on 19-21 April 1506 during Holy Week, and only ended when a New Christian, João Rodrigues Mascarenhas, a nobleman, was killed by mistake, and finally the royal troops arrived to restore the order.

Manuel I punished those involved, confiscating their property, and the Dominicans instigators were sentenced to death by hanging. There are also indications that the Convento de São Domingos (located downtown ) was closed for eight years and the representatives of the city of Lisbon were expelled from the Crown Council (equivalent to the current Council of State).

Following the massacre, growing anti–semitism in Portugal and the establishment of the Court of the Holy Office – which began operating in 1540 , lasting until 1821, many Jewish families fled or were expelled from the country, having as main destination The Netherlands, France ,Turkey and Brazil, among other countries.

Although expelled from the Iberian Peninsula, Jews could only leave Portugal by paying “ransom” to the Crown. In the process of emigration, the Jews abandoned their properties or sold them for very low prices, only traveling with the luggage they could carry with them. The massacre of 1506 is not mentioned in the history books, fell into obscurity, and few historians refer to it. The horror and violence were described and reproduced by Damião de Góis, Alexandre Herculano, Oliveira Martins, Garcia de Resende, Salomon Ibn Verga and Samuel Usque.Lisbon, City of Tolerancejews in LisbonMonument in Lisbon in honor of the Jews killed in the massacre of 1506.

This massacre is remembered today by a monument built in Largo de São Domingos, in honor of Judaism, which was inaugurated on April 23, 2008.

On the site, a traditional meeting point for foreigners, especially Africans, there is a wall where the phrase “Lisbon City of Tolerance” is written in 34 languages.

The monastery chapel (Church of Saint Dominic ) was rebuilt after the earthquake of 1755, and the convent closed in 1834 . 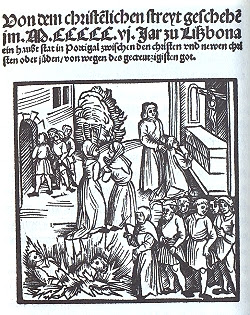 Prayer: Father, forgive the things done in your name to your people Israel. How can our eyes be free from tears of grief and repentance when we see the desecration of your name by your church? How can we begin to intercede for the church and Israel when such rivers of blood have been shed by those who claimed to be your disciples? How can it come as a surprise when such multi-generational hatred and victimhood perpetuates the barrier between your church and Israel? Father, forgive, cleanse, heal and reconcile, we pray! Especially here, where the victims were Jewish and outwardly Christian, help Messianic Jews to be examples of love, mercy and forgiveness as they situate themselves within both groups. In the name of Yeshua we pray. Amen.

A German woodcut depicting the massacre, one of the few woodcuts that survived the 1755 Lisbon earthquake and the fire at Torre do Tombo

The massacre of 1506 sent shockwaves throughout Europe and accounts of it exist in Portuguese, Jewish, Spanish and German sources. An anonymous German, who was present in Lisbon at the time of the massacre and personally witnessed the tragedy, wrote a vivid account that was printed in at least three different German editions.2 Likewise, the Spanish chroniclers Andrés Bernáldez and Alonso de Santa Cruz – who did not bother to mention the forced conversion of the Portuguese Jews in 1497 at all – both devoted an entire chapter in their works to the tragedy of 1506. 3 Some of these sources offer us stirring eyewitness accounts. The New Christian Isaac Ibn Faradj, for instance, was present in Lisbon during the massacre. He was fortunate enough to survive and later escaped from Portugal for Salonica

in the Ottoman Empire where he reverted to Judaism. He wrote a brief account of the slaughter that still has the power to move a modern reader:

‘It happened on a Christian holiday (…). It was while the King and the Queen were absent from Lisbon, the capital, on account of the plague which raged there at that time, that a priest with a cross stood up, and wicked men with him, murderers and scoundrels, and they killed more than 1,400 Jews [i.e. New Christians], and burned their bodies, men and women, pregnant women and children. They burnt them in the streets of the city for three days on end, till the bodies were consumed and became ashes. I stole from the fire one half of the burned head of a dear friend of mine, and I hid it, kept it, brought it to Valona [most likely the town of Vlorë in modern-day Albania], and buried it in a Jewish burial-place. When King Manuel heard of the great wrong done to the Jews (sic) he came to Lisbon, and the priest was burnt at the stake, and forty murderers hanged.’4

“Among these were two Dominican friars, who went through the city of Lisbon with crucifixes on their shoulders, inciting the people…they attacked the weak and defenseless group of ill-baptized New Christians with spears and unsheathed swords. They killed four thousand of them, robbed them..they maimed them, dashed children against walls and disembered them, defiled women and girls and then killed them. They threw many pregnant women out of windows onto spearpoints awaiting them below…”

Consolation for the Tribulations of Israel, by Samuel Usque, 1553, Ferrara (translated from the Portuguese by Martin A. Cohen, Jewish Publication Society of America, 5737-1977 (Ladina))

The Massacre, from EJP:

“Historians estimate that between 2,000 and 4,000 “New Christians” – Jews who were forced by the state to convert in 1496 – were thrown into pyres set up across the city centre before authorities regained control of the Portuguese capital.

The violence erupted on April 19, 1506 after a man believed to be a “New Christian” suggested that a light emanating from a crucifix at a chapel was likely caused by natural causes instead of divine intervention as thought by many Christians.

He was dragged from the church by a group of women who beat him to death, according to several historical accounts.
A priest then made a fiery sermon against “New Christians” while two other priests, crucifix in hand, marched through the cobblestoned streets of Lisbon inciting people to kill them.

In the ensuing violence even Catholics who were thought to look like “New Chistians” were killed or saw their homes destroyed.

King Manuel, who was outside of the Portuguese capital when the massacre began, ordered the ringleaders rounded up and hung while those convicted of murder or pillage received various corporal punishments.
When the king forced the Jews to become Christians, many of them decided to leave the country, including a number of highly educated people, such as the astronomer and mathematician Abraão Zacuto, who went to Turkey, and Baruch Espinosa’s (Spinoza) parents, who went to Holland.

The massacre highlights the growing unease in Portugal at the time with “New Christians.” Spain had launched its Inquisition in 1492 which aimed to expel or forcibly convert to Christianity all Jews and other non-believers, prompting thousands to cross the border into Portugal where they sought shelter.

But nearly five decades later Portugal launched its own Inquisition which led hundreds of Jews to be tortured or burned at the stake in the 16th and early 17th century after being accused by church tribunals of being heretics.

The forced conversion of Jews together with the Inquisition drastically reduced the number of Jews in Portugal, leading the memory of the “Lisbon massacre” as it has come to be known to fade.
“Since Jewish culture practically disappeared from the country, there was no one to evoke the memory of the massacre,” author Richard Zimmler, who has written novels set against the purge of Jews in Portugal, said in an interview published in daily newspaper Público last Sunday. Some historians estimate that 20 percent of Portugal’s population, or 200,000 people at that time, before the start of the Inquisition were Jewish.

Many were successful traders and scientists whose international visibility made the term “Portuguese” be synonymous with “Jew” at the time.

Today there are just some 3,000 Jews in Portugal, a nation of just over 10 million people. Most are concentrated in Lisbon and the majority came to the country after Portugal’s Inquisition was officially abolished in 1821.”

Messianic Jewish teacher in UK
View all posts by richardsh →
This entry was posted in otdimjh and tagged 1506, antisemitism, aricle, lisbon, massacre, otdimjh. Bookmark the permalink.