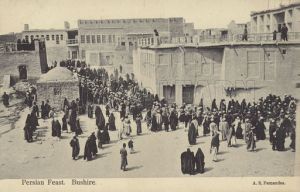 Passing through several towns and villages, Lotka reached Shiraz, the capital of Fars, after eighteen days’ travelling. There the chief rabbi actually helped him to distribute his New Testaments and tracts. Bushire was reached on December 1st, and Lotka preached in the synagogue of the Jews. He arrived at Bagdad next, on December 17th, thus completing a journey which had lasted four months, during which he had distributed 500 New Testaments, and 1,500 books and tracts.

Lotka was not only a pioneering missionary with CMJ – he also had a special bond  with Bernstein, as the two were baptised together on the same day

Lotka, Rev. J., a native of Russian Poland, where he was brought up by his parents in strict orthodoxy, but as he arrived at the age of discretion, he somehow managed to study, besides Hebrew and the Talmud, [343] the Polish and the German languages. Becoming acquainted with much Christian literature he had a great desire to read the New Testament, and this led him to give up the position of a Jewish teacher and to come to London for the purpose of receiving further Christian instruction by Dr. Ewald, who baptized him on November 22, 1863. (together with Bernstein) About two years later he went from the Operative Jewish Converts’ Institution to Basel, studied theology, and was sent out to labour as a Pastor among the Germans in Illinois, U.S.A. In 1879 he was appointed Professor of Hebrew in an Episcopal Seminary near Chicago, where he did also missionary work among the Jews. In 1872, he joined the L.J.S. and was sent to Lemberg, where he laboured for ten years, and visited many towns in Galicia. In 1881, after he had been on a tour of enquiry with the Rev. Frederick Smith in the Crimea, he was sent to Persia, where he remained from two to three years, and laid, so to speak, a solid foundation for the revived mission there. He subsequently laboured for a few years at Posen and Bucharest, and much longer in Birmingham, and then succeeded the Rev. J. C. S. Kroenig at Hull. He was the author of several tracts.

Beloved for the Father’s sake : memoir of the Rev. Jacob Lotka.

Lotka’s time in the USA is recorded in the

MINUTES OF THE FIRST Hebrew-Christian Conference

OF THE United States.

The Hebrew-Christians in that city [Chicago] requested the New York brethren to help them in their effort, and G. R. Lederer and Rev. S. Kristeller went to Chicago to be present at the organization the second Monday of May, 1867. Some unexpected difficulties arose after their arrival, but finally a meeting of about forty or fifty persons was held in the lecture room of the Second Presbyterian Church. Rev. Mr. Marquis, afterwards the well-known professor of McCormick Theological Seminary, was chairman, and Rev. Mr. Ryder, of Woodstock, Ill., a Hebrew-Christian, acted as secretary. Some Jews, who were present in the audience, made difficulties, but, after some discussion, the Western Hebrew-Christian Brotherhood was organized. Rev. Dr. Harshaw, a Gentile Christian pastor of Chicago, was elected president; Rev. Jacob Lotka, now the London Jews’ Society Missionary in Hull, England, was appointed missionary, with Rev. F. C. Schwartz, a Presbyterian minister of Woodstock, Ill., another Hebrew-Christian, as his assistant. The corresponding secretary was Emanuel Van Noorden, who, having been a Presbyterian missionary in Brazil, now lives in Sao Paulo, Brazil, a printer of religious literature.

Lotka’s son Alfred Jams Lotka was a distinguished mathematician. He was born in 1880 in Lemberg, located at that time in Austria, and now in Ukraine (Lviv or Lvov). He studied physics and chemistry at the University of Birmingham and then in Leipzig, where a “center of the new field of physical chemistry, a union of physics and chemistry emphasizing the use of thermodynamic principles in chemical systems” [Kingsland, 1995] had recently been created. He studied physics at Cornell University and became assistant in that field. In 1912, he obtained a D. Sc. in science from the University of Birmingham. Thanks to Raymond Pearl, who was interested by “his mathematical and demographic approach to biological systems”, he was linked with the Department of Biometry and Vital Statistics at Johns Hopkins University, but without any salary. In 1924 he was appointed as supervisor of Mathematical Research and as General Supervisor of the Statistical Bureau at the Metropolitan Life Insurance Company in New York. From 1934 to his retirement in 1947 he served in the Metropolitan Life Insurance Company as assistant statistician. He died very soon after his retirement, in December 1949. 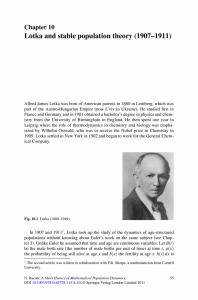 Lotka published almost a hundred articles on very various themes, chemistry, physics,
epidemiology, biology, etc. About half of the articles were devoted to population issues. He
also wrote six books. The first, Elements of Physical Biology, was published in 1925. It
became then Elements of Mathematical Biology. In 1930, as joint author with Louis I. Dublin, who was also a statistician at the Metropolitan Insurance Company, he published The money value of a man. In 1934 he published in French the first part of his Théorie analytique des associations biologiques, the part named “Principles”. The second part, “Analyse démographique avec application particulière à l’espèce humaine” was published five years later, in 1939. In this publication, Alfred J. Lotka presented a synthesis of his contribution to the mathematics of population. It is interesting to note that this fundamental book was translated into Spanish and published in 1969 by the Latin American Center of Demography (Celade), a center operating under the auspices of the United Nations based in Santiago, Chile. An English version of this text has been available only since the year 1998, when the book was translated under the title Analytical Theory of Biological Populations.

Prayer: Thank you Lord for the life and work or Jacob Lotka, traveller, minister and encourager of Jewish believers in Yeshua around the world. Thank you for his life of service to you and your people. Thank you also for the great gifts in mathematics of his son Alfred. May all creation praise your name, O Lord, and may the gifts of wisdom and understanding that you have given in science and the arts add to your praise. In Yeshua’s name. Amen.

Messianic Jewish teacher in UK
View all posts by richardsh →
This entry was posted in otdimjh and tagged article, cmj, gidney, lotka, otdmijh. Bookmark the permalink.