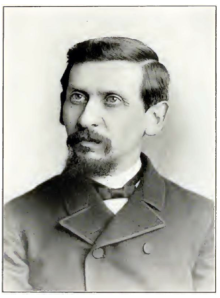 “Peace over Israel! Our dear pastor and friend, the Hebrew writer, Rabbi Chajim Jedidjah (Christian Theophilus) Pollak, surnamed Lucky, died Nov. 25th, 1916, just at the close of the earthly Sabbath. His name was filled with care. He was a member of the original, apostolic church of Jerusalem, zealous for the law of the fathers and witness of Jeschua in Israel. ‘There remaineth therefore a rest to the people of God.'”

So wrote Lutheran Pastor August Wiegand, Lucky’s friend and collaborator, in his obituary of a complex and multifaceted Jewish believer in Jesus, with as many names as aspects to his life, ministry and identity: : “Chajim Jedidjah (Christian Theophilus) Pollak called Lucky”

Lucky, Rev. C. Theophilus, a native of Tisminitz, in Galicia, and a most remarkable convert to Christianity in the nineteenth century. He was known not only as a great Hebrew scholar, writing Hebrew in classical style as a living language, and as thoroughly conversant with the whole range of Jewish literature, but also as possessing a wide knowledge of Christian literature. Having studied at the Berlin University and High School for the knowledge of Judaism, and making researches in philosophical and religious subjects, he was led to become a believer. Lucky received Evangelical ordination in New York. In 1887 he first published a Hebrew periodical, “Eduth le Israel,” which he continued for some years, when he returned to Galicia and took up his residence in Stanislau. There he lived and laboured among his brethren, preaching by the written and spoken word, but above all by his example, scarcely receiving any help from men. He was a living illustration of a Hebrew Christian of the first century; though thoroughly Orthodox as to the cardinal doctrines of Christianity, yet he believed that it was incumbent upon him to [349] observe the Jewish Sabbath and all other Jewish festivals and the dietary laws, not for the sake of being justified by the works of the law, but for the sake of satisfying his own conscience, and that he might be more useful as an evangelist amongst his brethren in Galicia. 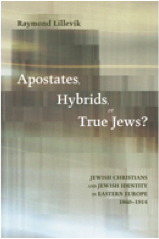 Lillevik notes the complexity and polysemous nature of the materials – several additional names, multiple accounts of his coming to faith, uncertainty over where, when and if he was baptised, differences in his presentation of himself within Jewish and Christian circles, his difficulties in relationships with all but a few close friends, major difficulties with the ‘standard’ Jewish missions approach of the traditional Jewish missions, struggles to promote the first Hebrew language Messianic periodical, Eduth L’Yisroel, and a life that became eccentric and ultimately pessimistic and depressed.

Yet what an insight we are given into such a visionary soul, a true pioneer of what has now become mainstream in Messianic Jewish thought, although often without the depth and lived experience of Chaim Yedidiah. Our modern Messianic movement owes him so much, and would do well to learn from him, the richness of his faith, the way he constructed his identity, and the difficulties he faced. I reproduce below some of the material from Lillevik and Kjaer-Hansen. Reader, take and learn!

Prayer: Thank you, Lord, for the life of Chaim Yedidiah Pollak, known as Lucky. As a Jewish believer in Yeshua who was committed to expressing his faith as a Jew, orthodox and observant, his story challenges us to avoid the assimilation and dichotomisation to which so many of us fall prey. His own struggles to identify and live out this calling show how hard that is, and his own achievements through his writing, travels and ministry show how much You gifted him for the task. Help us to learn from him, walk in his footsteps, and rightly appreciate his contribution in faithfulness to your call. In our Messiah’s name we pray. Amen.

This fascinating, groundbreaking and much-needed study of three pioneering Jewish believers in Jesus – Rudolf Hermann (Chaim) Gurland, Christian Theophilus Lucky (Chaim Jedidjah Pollak), and Isaac (Ignatz) Lichtenstein -highlights their contribution to 19th century Hebrew Christianity and to Messianic Judaism today. Lillevik tells their stories, traces their theological development and explores the challenges they posed and faced. Through the lens of history and comparative analysis, his careful scholarship calls for renewed attention to the role of Jewish believers in Jesus as the bridge between Church and Synagogue. Read, reflect and enjoy!

Wiegand tells how, in Berlin, Lucky came across a Greek New Testament that he read to practice the language. Although the Jewish character of the book struck him, particularly in the writings of Paul, at first he was not very concerned about the person of Jesus. This, however, changed as a result of his struggles with Orthodox and Reform views on revelation. At this point he had come to the conclusion that if the Torah was genuine divine revelation, the New Testament had to be the same. He came to this conclusion the night before his exam sermon in a Prussian synagogue, apparently as a part of his studies at the Hochschule. This led him to regard Jesus and the New Testament as a genuine and legitimate part of the divine revelation together with the Torah. The following morning he told his teacher Israel Lewy about his decision:

344 Wiegand, “Chajim Jedidjah Lucky,” 44–45. The conversation with his teacher Lewy was as follows: “This night I have become a Christian.” “What’s that supposed to mean? Have you fallen into the hands of the missionaries?”

“No, you are the first one I have spoken with. My faith comes solely from the New Testament, which I consider equal with the Old.”

“And now you are going to turn your back on our people and its holy religion?” “Oh no, since Jesus is the promised Messiah, faith in him is not apostasy from the religion of Israel.” “But everyone from our people who goes to this Jesus becomes a Meshummad.” “I will never become a Meshummad.”

Tonight we are going to talk about Lucky, a law-observing Jesus-believing Jew from Galicia (a historical region in East Central Europe, currently divided between Poland and Ukraine), a man with many names and many facets.

A friend of Lucky’s, the Lutheran clergyman Max Weidauer writes in 1923 that if you wanted to know something about Lucky’s life and development, you had to “pump him for information”. About Lucky’s life I shall have to confine myself to a minimum. He loved Jesus. He loved his people. One of his concerns was that the (many) Jews who had forgotten that they were a people and just regarded themselves as, for example, Germans of Jewish persuasion might also see themselves as God’s people. He wanted to take Jesus into the synagogue. He was a Jesus-believing Jew and lived to the end of his life as a law-observing Jew. And he was a bitter opponent of Jewish mission.

Lucky was born in 1854 near Stanislau in Galicia. He came to faith while he was studying in Berlin in the mid-1870s. He and another student had been given the assignment to compare Hillel and Jesus. So he had to study the New Testament, which he did in Delitzsch’s Hebrew translation. And he came to faith. He is in the USA for some years during the 1880s; in this period he is co-editor of the English periodical The Peculiar People and the Hebrew Eduth le Israel (Testimony to Israel). When he returns to Europe in 1889, he is offered a post at the Institutum Judaicum in Leipzig, which he declines.

Lucky then settles in Stanislau in Galicia. In 1916 he sets off for the USA in order to renew his citizenship there. I do not know why this is so important for him. Due to the First World War he finds himself stranded in neutral Holland. Politically he sides with Germany, as he hoped that a German victory would make a massive Jewish immigration to Palestine possible. In Holland he falls ill and is taken to the hospital Eben-Ezer near Berlin. The law-observing Jesus-believing Jew dies there on November 25, 1916, at the end of the Sabbath – after having been nursed by Methodists.