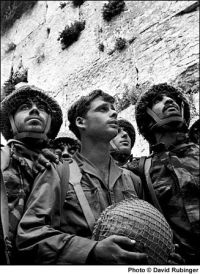 June 27, 1967, the Israeli Knesset extended Israel’s legal and administrative jurisdiction to all of Jerusalem, and expanded the city’s municipal borders. Levi Eshkol assured the spiritual leaders of all faiths that Israel was determined to protect the Holy Places. The Knesset passed the Protection of Holy Places Law granting special legal status to the Holy Sites and making it a criminal offence to desecrate or violate them, or to impede freedom of access to them. Jerusalem became a reunified city that ensured freedom of religion and access to holy sites for all.

Prayer: Thank you Lord for the re-unification of Jerusalem after the 6 Day War. May if be a city of peace, for all its inhabitants, neighbours and visitors, and may your justice, peace and freedom be exemplified by the conduct of its citizens. Bring peace, we pray, O Lord, in Yeshua’s name! Amen.

On June 7, 1967, IDF paratroopers advanced through the Old City toward the Temple Mount and the Western Wall, bringing Jerusalem’s holiest site under Jewish control for the first time in 2000 years. There are sound recordings of the scene, as the commander of the brigade,Lt. General Mordechai (Motta) Gur, approaches the Old City and announces to his company commanders, “We’re sitting right now on the ridge and we’re seeing the Old City. Shortly we’re going to go in to the Old City of Jerusalem, that all generations have dreamed about. We will be the first to enter the Old City…” and shortly afterwards, “The Temple Mount is in our hands! I repeat, the Temple Mount is in our hands!” General Rabbi Shlomo Goren, chief chaplain of the IDF, sounded the Shofar at the Western Wall to signify its liberation. To Israelis and Jews all over the world, this was a joyous and momentous occasion. Many considered it a gift from God.

“For some two thousand years the Temple Mount was forbidden to the Jews. Until you came — you, the paratroopers — and returned it to the bosom of the nation. The Western Wall, for which every heart beats, is ours once again. Many Jews have taken their lives into their hands throughout our long history, in order to reach Jerusalem and live here. Endless words of longing have expressed the deep yearning for Jerusalem that beats within the Jewish heart..You have been given the great privilege of completing the circle, of returning to the nation its capital and its holy center…Jerusalem is yours forever.”

“The Wall was before us. I trembled. There it was as I had known it—immense, mighty, in all its splendor…overcome, I bowed my head in silence.”

“I felt truly shaken and stood there murmuring a prayer for peace. Motta Gur’s paratroopers were struggling to reach the Wall and toudh it. We stood among a tangle of rugged, battle-weary men who were unable to believe their eyes or restrain their emotions. Their eyes were moist with tears, their speech incoherent. The overwhelming desire was to cling to the Wall, to hold on to that great moment as long as possible.”

“I am speaking to you from the plaza of the Western Wall, the remnant of our Holy Temple. ‘Comfort my people, comfort them, says the Lord your God.’ This is the day we have hoped for, let us rejoice and be glad in His salvation. The vision of all generations is being realized before our eyes: The city of God, the site of the Temple, the Temple Mount and the Western Wall, the symbol of the nation’s redemption, have been redeemed today by you, heroes of the Israel Defense Forces. By doing so you have fulfilled the oath of generations, ‘If I forget thee, O Jerusalem, may my right hand forget its cunning.’ Indeed, we have not forgotten you, Jerusalem, our holy city, our glory. In the name of the entire Jewish people in Israel and the Diaspora, I hereby recite with supreme joy, Blessed art Thou, O Lord our God, King of the universe, who has kept us in life, who has preserved us, and enabled us to reach this day. This year in Jerusalem – rebuilt! “

–General Shlomo Goren, Chaplain of the Israeli Defense Forces, at the Western Wall

In a statement at the Western Wall, Minister of Defense Moshe Dayan indicated Israel’s peaceful intent and pledged to preserve religious freedom for all faiths in Jerusalem:

To our Arab neighbors we extend, especially at this hour, the hand of peace. To members of the other religions, Christians and Muslims, I hereby promise faithfully that their full freedom and all their religious rights will be preserved. We did not come to Jerusalem to conquer the Holy Places of others.

Before visiting the Western Wall, Prime Minister Levi Eshkol met with the spiritual leaders of different faiths in his office and issued a declaration of peace, assuring that all holy sites would be protected and that all faiths would be free to worship at their holy sites in Jerusalem. He declared his intention to give the spiritual leaders of the various religions internal management of their own Holy Sites. Defense Minister Dayan immediately ceded internal administrative control of the Temple Mount compound to the Jordanian Waqf (Islamic trust) while overall security control of the area was maintained by Israel. Dayan announced that Jews would be allowed to visit the Temple Mount, but not to hold religious services there.

Dayan also gave immediate orders to demolish the anti-sniping walls, clear the minefields and removed the barbed-wire barriers which marked the partition of Jerusalem. Within weeks, free movement through Jerusalem became possible and hundreds of thousands of Israeli Jews flocked to the Old City to glimpse the Western Wall and touch its stones. Israeli Muslims were permitted to pray at the Al Aqsa Mosque and the Dome of the Rock for the first time since 1948. And Israeli Christians came to visit the Church of the Holy Sepulchre.

On June 27, 1967, the Israeli Knesset extended Israel’s legal and administrative jurisdiction to all of Jerusalem, and expanded the city’s municipal borders. Eshkol again assured the spiritual leaders of all faiths that Israel was determined to protect the Holy Places. The Knesset passed the Protection of Holy Places Law granting special legal status to the Holy Sites and making it a criminal offence to desecrate or violate them, or to impede freedom of access to them. Jerusalem became a reunified city that ensured freedom of religion and access to holy sites for all.

The religious freedoms enjoyed by Jews, Christians, and Muslims in the reunified Jerusalem had been un heard of during Jordanian occupation of the city, prompting even a former Jordanian ambassador to the United Nations, Adnan Abu Odeh, to acknowledge that “the situation in Jerusalem prior to 1967 [under Jordanian rule] was one of … religious exclusion” whereas post-1967, Israel seeks “to reach a point of religious inclusion …” (The Catholic University of America Law Review, Spring 1996).