On March 19, 1497 (the first day of Passover) Jewish parents in Portugal were ordered to take their children, between the ages of four and fourteen, to Lisbon. King Manoel, in an effort to prevent the Jews from fleeing the persecutions and expulsions from Spain in 1492, secretly ordered the baptism of all children between the ages of four and fourteen. Upon arrival, the parents were informed that their children were going to be taken away from them and were to be given to Catholic families to be raised as good Catholics.

From an address by Arthur Benveniste on the 500th anniversary of the expulsion:

King Manoel had previously ordered all Jews to leave Portugal by October 1497, but had begun to question his decision.   He knew of the value of the Jews and may genuinely have felt he could convert them. He wanted to find some way to keep them in Portugal as Catholics. On the advice of the his physician, Antonio, who himself was a converso, Levi ben Shem-tob he found a way to achieve this goal.

At the appointed time, those children who were not presented voluntarily were seized by the officials and forced to the font. Scenes of horror were witnessed as they were torn away by the royal bailiffs. In many cases, parents smothered their offspring in their farewell embrace. In others, they threw them into wells in order to save them from the disgrace of apostasy, and then killed themselves.

Sometimes, even old men were dragged to the churches and forcibly baptized by over-zealous fanatics, who were under the impression that a general conversion of all the Jews had been ordered. The desired effect of forcing the parents to accompany their children into baptism rather than lose them for good was achieved only on exceptionally rare occasions. In all other cases, the unwilling neophytes, some mere babies, were distributed throughout the country, as far as possible from home, to be brought up in Christian surroundings. 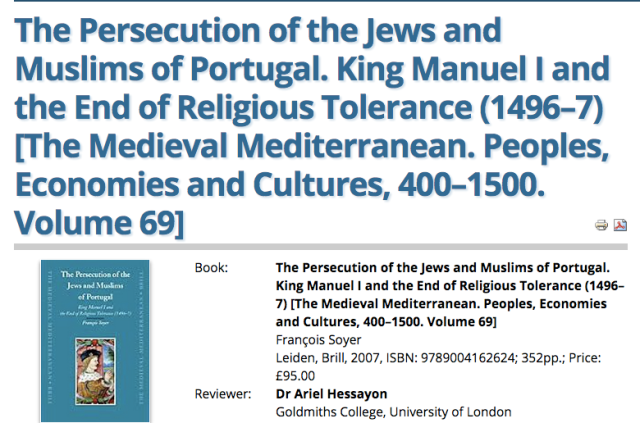 More than thirty years later, the terrible scenes still lived in the mind of the old Bishop Coutinho. ” I saw many persons dragged by the hair to the font,” he wrote. “Sometimes, I saw a father, his head covered in sign of grief and pain, lead his son to the font, protesting and calling God to witness that they wished to die together in the law of Moses. Yet more terrible things that were done with them did I witness, with my own eyes.” The children of the Moslems, who were included in the edict of expulsion, were untouched. The authorities cynically confessed the reason. It was that there were lands in which the Crescent was supreme, and in which reprisals might be carried out!

Meanwhile the final date for departure was arriving.   At first the king gave the Jews three ports from which to leave. But soon he changed his mind and ordered them all to leave from Lisbon. In October 1497 some twenty thousand Jews from all parts of Portugal gathered in Lisbon where they were herded onto the courtyard of Os Estâos, a palace normally used for diplomatic receptions. Here they were harangued by priests and apostate Jews in an attempt to bring them to the baptismal font. Some succumbed.   The rest were kept under guard until the time for their departure had elapsed. They were then informed that by their failure to leave they were now declared forfeit of their liberty and again were the king’s slaves. More succumbed, others were dragged to the font by force. And the remainder? Holy water was sprinkled on them and they were declared to be Christians.

King Manoel then informed the Catholic Kings of Spain. “There are no more Jews in Portugal”

Prayer: It is with great sadness, shock and horror that we read of the events that took place on this day. Like so many similar acts in the history of our people Israel, those who called themselves followers of the Messiah failed to show his love, mercy and forgiveness, and instead wedded tyranny to terror. Lord, have mercy, and help us to learn for the terrible mistakes of the past, and show your justive, love, forgiveness and compassion to all. In Yeshua’s name we pray. Amen.

Then a week before Easter 1497 Jewish children were seized from their parents with the intention of dispersing them throughout the kingdom where they would be raised as Christians. Eyewitness accounts and inquisitorial trial dossiers indicate that they were forcibly baptised, yet most of the adults held steadfast. After refusing enticements to convert, Manuel lured them to Lisbon from where they hoped to embark for a new life. Instead thousands were crammed into a park behind the Estaus palace. There they suffered terribly. Reportedly deprived of food and drink, the Jews were dragged to nearby churches for baptism. Those that still resisted were ‘condemned to be burnt’ (p. 226). Others committed suicide. It was, in the words of Rabbi Abraham Zacuto, ‘a forced conversion on a scale never before witnessed’ (p. 239). As for the survivors who had preferred nominal Christianity to death, they were granted 20 years immunity from official scrutiny. Yet popular hostility remained undiminished. Following an inflammatory sermon preached at Lisbon by a Dominican on Easter Sunday 1506 more than 3,000 New Christians were massacred over several days and their bodies, according to the chronicle of Damião de Góis (1502–c.1574), burned on a bonfire. New Christians were later accused of causing an earthquake and their situation became even more dangerous in 1536 when Pope Paul III relented to political pressure and issued a bull establishing the Inquisition in Portugal. Only in 1821 was this Portuguese Inquisition officially abolished (p. 295).

Messianic Jewish teacher in UK
View all posts by richardsh →
This entry was posted in otdimjh and tagged article, otdimjh, portugal. Bookmark the permalink.