From 1533 to his death in 1546, Martin Luther served as the dean of theology at University of Wittenberg. During this time he suffered from many illnesses, including arthritis, heart problems and digestive disorders, and the physical pain and emotional strain of being a fugitive might have been reflected in his writings. Some works contained strident and offensive language against several segments of society, particularly Jews and Muslims. During a trip to his hometown of Eisleben, he died on February 18, 1546, at age 62.

Shortly before his death on February 18, 1546 Luther preached four sermons in Eisleben (on February 14). To his second last sermon he appended what he called his “final warning” against the Jews. The main point of this short work is that authorities who could expel the Jews from their lands should do so if they would not convert to Christianity. Otherwise, Luther indicated, such authorities would make themselves “partners in another’s sins”. 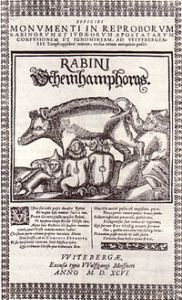 Luther set off on his last trip on January 17, 1546, to his birthplace Eisleben (only in German). Although he was drawn with illness, he went to settle a dispute among the Mansfeld Counts. The negotiations ended successfully.

Luther did not have the energy to return to Wittenberg. He died on February 18, 1546 in Eisleben. On his death bed, he prayed “Into your hands, I command my spirit. You have saved me, Father, you faithful God.”

We want to deal with them in a Christian manner now. Offer them the Christian faith that they would accept the Messiah, who is even their cousin and has been born of their flesh and blood; and is rightly Abraham’s Seed, of which they boast. Even so, I am concerned [that] Jewish blood may no longer become watery and wild. First of all, you should propose to them that they be converted to the Messiah and allow themselves to be baptized, that one may see that this is a serious matter to them. If not, then we would not permit them [to live among us], for Christ commands us to be baptized and believe in Him, even though we cannot now believe so strongly as we should, God is still patient with us.

Luther continued, “However, if they are converted, abandon their usury, and receive Christ, then we will willingly regard them our brothers. Otherwise, nothing will come out of it, for they do it to excess.”

Luther followed this with accusations,

They are our public enemies. They do not stop blaspheming our Lord Christ, calling the Virgin Mary a whore, Christ, a bastard, and us changelings or abortions (Mahlkälber: “meal calves”). If they could kill us all, they would gladly do it. They do it often, especially those who pose as physicians—though sometimes they help—for the devil helps to finish it in the end. They can also practice medicine as in French Switzerland. They administer poison to someone from which he could die in an hour, a month, a year, ten or twenty years. They are able to practice this art.

Yet, we will show them Christian love and pray for them that they may be converted to receive the Lord, whom they should honor properly before us. Whoever will not do this is no doubt a malicious Jew, who will not stop blaspheming Christ, draining you dry, and, if he can, killing [you].

Prayer: Father, forgive us our sins, as we forgive those who sin against us. We cannot take back the things that Luther wrote and said. But we can repent of his legacy, and how it continues to affect Jewish-Christian relations today. Help us to see what needs to be done and call upon others to make restitution and restore broken relationships. As Jewish believers in Yeshua, help us to be a means of forgiveness, reconciliation and peace-building, and to cleanse our own hearts of anger, pain and hurt. In Yeshua’s name, Amen,

This work has been newly translated and published in volume 58 (Sermons V) of Luther’s Works, pages 458–459.