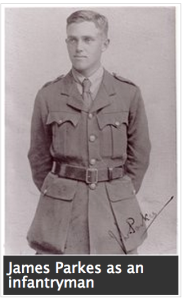 “Imagine…if one can, a man who –– decades before the Holocaust and long before the full effects of mixing with Jews were felt –– grasped the extent of the historic acts of injustice of Christians toward Jewry and determined to atone for them by ending them. Imagine how, in his incredible capacity for empathy, he was able to penetrate through layers and layers of denigration and centuries of hardening the heart in order to feel the Jews’ pain and victimization. Imagine the power of discovery that enabled him to internalize the message and fate of Judaism as well as the intellectual daring that enabled him to apply these insights to the reformulation of the classic Christian faith in which he was so deeply rooted. This is the man –– Ecce Homo –– James Parkes.” [Irving Greenberg]

Those for whom Nostra Aetate, the conciliar declaration on the relationship of the Church to non-Christian religions, marks the beginning, or perhaps an early stage in their interest in Jewish-Christian relations, will do well to give thanks for the work of James Parkes whose life ebbed peacefully to its close on the evening of 6 August.

Born in Guernsey in December 1896, he received a classical education at St Elizabeth’s College, an education in “life in the raw” during a period of military service as a Brigade Gas Officer in France (which nearly cost him his life), and a theological education at Oxford in the immediate post-war period. He was ordained in 1925 shortly after becoming a Student Christian Movement secretary. It was during a period of service in the international student field that he first encountered the Jewish problem not as an acactemic, but very much an existential issue.

His concern at what he saw and vicariously experienced of discrimination against Jewish students prompted him to search for the underlying causes of these contemporary manifestations of antiJewish feeling. His researches led to the conclusion summarised in his first book on the subject, The Jew and his Neighbour (1930) that: “. . . the origin of anti-Semitism lies, unconsciously and unintentionally, in the interpretation of the Old Testament current in the early Church, and in the picture of the Jews as a rebellious people who had crucified the Messiah and still refused to believe in him, which was continuously repeated from the Christian pulpits.”

That was for James the heart of the matter as it was also to become the starting point for his life’s work. He began to lay plans for a five-volume history of antiSemitism of which the first volume, The Conflict between the Church and the Synagogue (1934) earned him an Oxford doctorate in philosophy, a reputation for sound scholarship, and together with his already widely-known activities in the student world in combating anti-Semitism, a place in the Nazi “black-list.” He left Geneva which had been the centre of his work among students and settled in a small Elizabethan manor at Barley, near Cambridge, which very soon became a centre of attraction for Jewish and Christian scholars and teachers from this country and overseas. There he built-up a valuable library on the whole field, historical and contemporary, of Jewish-Christian relations. This was incorporated in 1956, and on his retirement in 1963, transferred to Southampton University as a permanent collection in the University Library, where also there was established a Parkes Research Fellowship. During the years of his retirement at Iwerne Minster in Dorset, his home and his person continued to attract visitors and correspondence from all parts of the world.

In 1938 the second volume of the projected five appeared under the title of The Jew in the Medieval Community, but that was the end of the “history” in that particular form. Thereafter there appeared a spate of books dealing, some in depth and some for more general consumption, with every aspect of the Jewish problem in the modern world, a problem now highlighted by the tragedy of the Nazi holocaust and further complicated by the situation in the Middle East and the emergence of the State of Israel, on which the quintessence of his views found expression in a small but pregnant volume entitled The Five Roots of Israel. 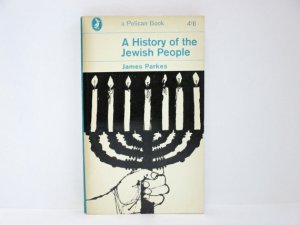 But James Parkes was not only a historian. He was also something of a theologian. In 1940 under the pseudonym of John Hadham (the reasons for his choice of which are delightfully and characteristically recorded on page 158 of his autobiography: Voyage of Discoveries), he published Good God as a Penguin Special. This, together with a companion volume in the same series, God in a World at War, found an enthusiastic readership among men in the forces whose religious foundations, not very securely laid, were being badly shaken by their war-time experiences. They were also devastatingly reviewed by James Brodrick in a brilliant article on “Penguin Theology” in The Tablet of 26 April 1941. I could only wish that the two might have met and compared notes, for James in his “theological” role was, as I always felt, essentially a poser of searching questions rather than a proposer of superficial answers!

Much more serious in the religious sphere, and thought by many to be his most important contribution to the development of a fundamentally sound understanding between Christians and Jews is The Foundations of Judaism and Christianity (1961). Again, though of a very different order from the John Hadham books, it is a question-probing rather than a solution-propounding enquiry into the implications of the continuing existence in parallel of the two faiths. Each he argued is valid in its own right, each has its own mission to fulfil, and yet neither can complete its task apart from its relationship with the other.

His theological speculations, however, took him further afield than his consideration of the contemporary relations between Judaism and Christianity. “The concern to relate what we really believe with what we say in church dates back to my childhood” he wrote in this autobiography, and in later life he came to regard Humanism as a channel of divine revelation along with Judaism and Christianity. This led him to a “doctrine” of the Trinity which put him at variance with the mainstream of theological orthodoxy and led many to write him off theologically, at least as lightweight. It remains to be seen, however, whether in the long run the stimulus of his heterodoxy may not have some contribution to make to the clarification of some Of our more orthodox dilemmas.

It is, however, as a historian of the origins, development and contemporary ramifications of anti-Semitism that he will be long remembered by all who are concerned with the eradication of that deeprooted evil. It was in recognition of this that in 1949 he was elected to the presidency of the Jewish Historical Society of England, and that he became the recipient of other honours and awards in the later years of his life, including the BuberRosenzweig Medal awarded annually by the German Coordinating Council of Organisations for Jewish-Christian Cooperation.

Those who were fortunate enough to know him personally will remember him also as a man of many talents. No mean artist with pencil and pastel in his early years, he also developed a remarkable skill in embroidery, until Dupuytrens contraction robbed his fingers of the ability to ply his needle. This somewhat unusual talent offered for him at least a far more satisfying outlet than the doodling in which so many of us indulge while others talk in committees and otherwhere. Connoisseur and collector of lovely things, he was also a great garden lover, and a skilled gardener himself; a delightful raconteur and a charming host. In all this as well as in his major activities he was greatly helped by his wife porothy (Wickings) whom he married in 1942, by whom he is survived, and to whom in so many ways he owed so much.

Reflection: It is not exaggeration to say that Parkes revolutionized Jewish-Christian relationships, and the narrative paradigm of early Judaism and Christianity. While his work has undergone critical scrutiny and has now been revise by others, and he was in no way sympathetic to Jewish believers in Yeshua, we are in debt to him for his profound scholarship, deep sensitivity to the sins of the past, and his love of the Jewish people. May we have courage and wisdom to build on his work. In Yeshua’s name we pray. Amen. 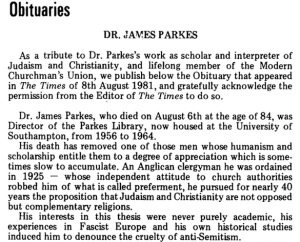 “The real lesson from the conduct of the persecutors is that a society has a positive task to safeguard and maintain decency and humanity, and to recognize the evils that destroy them” Reverend Dr James Parkes, Founder of The Parkes Institute

Parkes read in five languages; his books have been translated into seven. His other major works in his primary subject include

The Conflict of the Church and the Synagogue: A Study in the Origins of Antisemitism (Meridian Books, Jewish Publication Society, 1961 [1934]);

End of An Exile: Israel, the Jews and the Gentile World (Vallentine, Mitchell, 1954);

The Foundations of Judaism and Christianity (Quadrangle, 1960);

Whose Land? A History of the Peoples of Palestine (Taplinger, 1971).

Much of his writing involved him in the case for, and the meaning of, a Jewish state. He become deeply involved in the question of Zionism and the Zionist cause.

In an address to the London Society of Jews and Christians, Parkes observed that the hatred and denigration of Jews and Judaism

“have a quite clear and precise historical origin. They arise from Christian preaching and teaching from the time of the bitter controversies of the first century in which the two religions separated from each other. From that time up to today there has been an unbroken line which culminates in the massacre . . . of six million Jews. The fact that the action of Hitler and his henchmen was not really motivated by Christian sentiments, the fact that mingled with the ashes of murdered Jews are the ashes of German soldiers who refused to obey orders when they found out what those orders were, the fact that churches protested and that Christians risked their lives to save Jews — all these facts come into the picture, but unhappily they do not invalidate the basic statement that antisemitism from the first century to the twentieth is a Christian creation and a Christian responsibility, whatever secondary causes may come into the picture.”

Messianic Jewish teacher in UK
View all posts by richardsh →
This entry was posted in otdimjh and tagged article, james parkes, otdimjh, parkes. Bookmark the permalink.

1 Response to 6 August 1981 Death of James Parkes, Campaigner against Antisemitism and Re-visioner of Jewish-Christian Relations #otdimjh