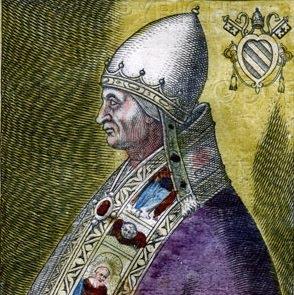 Pope Innocent IV was born in 1195 in Genoa, Italy. He became a Catholic priest and scholar and was elected as Pope in 1243.

On May 9, 1244 Innocent IV issue a papal bull [bulla – the seal on papal decrees] to French King Louis IX entitled Impia judoerum perfidia [the unpious treachery of the Jews]. This phrase is a popular epithet against the Jews, calling them a “perfidious” race.

Pope Innocent IV explains that Jesus tolerates Christians and Jews living together, but only in the expectation that the Jews will eventually convert to Christianity. He goes on to say:

“For their part, these ungrateful do not admit [and none repent] their errors and do not revere the honor of the Christian faith.

They have abandoned the law of Moses and the Prophets, following a few traditions of their elders. …”

Pope Innocent IV sends Dominicans and Franciscans out to the Tartars

King Louis IX is ordered to publicly burn the Talmud and other Jewish texts throughout France because the Talmud contains “blasphemies against God and Christ, the Virgin Mary, forgery and abuse of untold mischief.”

Pope Innocent IV also bans Jews from employing Christian nurses or servants because their faith might become confused, causing them to bring down the wrath of God on themselves.

Innocent IV (in the middle) I, Ecumenical Councils of Lyons. 1278

The Papal bull (law) reaffirmed the restrictions on Jews implemented by Pope Gregory IX. The Jewish Talmud was banned and Jews were prohibited from hiring Catholics to avoid manual labor.

The phrase “perfidious Jews” continues to be used in the liturgy until it was removed in 1959. 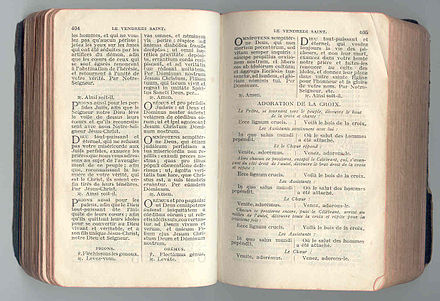 Prayer: For too long the church prayed for the ‘perfidious Jews’, and for too long the Jewish people suffered calumny, persecution and anti-Semitic treatment as a result of Christian theological anti-Judaism. Lord, have mercy, both on your church, your people Israel and on all who suffer prejudice, discrimination and hatred because of race, creed or life choices. Help us to model the love, mercy and reconciling forgiveness of your Son the Messiah. In Yeshua’s name we pray. Amen.

Schlomo Simonsohn, The Apostolic See and the Jews. (Toronto, The Pontifical Institute of Medieval Studies, 1991), 306.